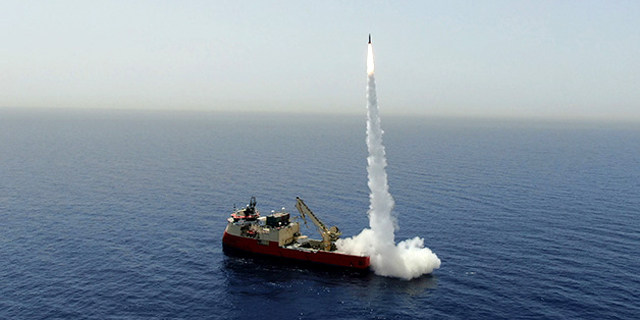 The trial, held in the open sea, was designed and performed under Covid-19 restrictions and demonstrated the capabilities of the advanced system to customers

The trial, held in the open sea, was designed and performed under Covid-19 restrictions as part of IAI’s work plan, which includes demonstrating the capabilities of the advanced system to customers, reportedly a foreign country interested in purchasing the system.

Azerbaijan is one country known to have already bought the system, displaying the missiles in 2018 in an opening ceremony of a new military unit.

The trial included the launch of two long-range LORA missiles to a pre-defined hit point at sea. The complex trial included two scenarios to test and demonstrate LORA’s capabilities. The first scenario involved a short-range launch to 90 kilometers and the second to a long range of 400km. This was the first time that LORA successfully hit a target 400km away in an official trial. "Both the weapon system and the missile successfully met all of the trial’s objectives," read the IAI's press release.

Developed by IAI’s MALAM division, LORA is a sea-to-ground and ground-to-ground system which comprises a long-range ballistic missile, a launcher, a command and control system, and a ground/marine support system.

"The complex trial, performed under Covid-19 limitations, demonstrated the advanced capabilities of both IAI and LORA, our strategic missile system," said Boaz Levy, IAI's EVP and General Manager of the Systems, Missiles and Space Group. "The trial was executed according to a fully functional design, which tested the system’s maneuvering, strike, and precision, as well as technological developments and enhancements introduced by our engineers. Performing a trial with this level of complexity during these days is a testament to IAI’s unwavering commitment to our clients across the globe."

LORA was developed at IAI’s Systems, Missiles & Space Group. The Group boasts a long record in air-defense systems, such as the Arrow 2 and 3, and countless missile and satellite systems. The Group has also co-built the Beresheet spacecraft which traveled to the moon on its first mission, but disappointingly crashed during the approach to its surface.