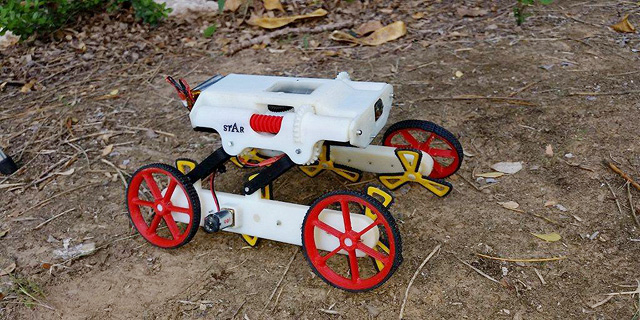 New search and rescue robot developed by researchers at the Ben-Gurion University of the Negev in southern Israel can climb large obstacles, crawl over rough terrain, and fold to maneuver tight spaces. It can even climb through narrow vertical passageways.

Named the Rising Sprawl-Tuned Autonomous Robot, or R STAR, the highly maneuverable robot has an adjustable sprawling wheel legs attached to a body that can move independently and reposition itself to run on flat surfaces and up tight spaces such as tunnels, pipes, and narrow gaps. The tiny robot—15-centimeters-long—can travel more than 3 feet per second on hard flat surfaces and adapt to moving on soft or granular surfaces like thick mud or sand.

The robot was unveiled in May at the International Conference on Robotics and Automation in Brisbane, Australia.

The robot was designed by David Zarrouk, a professor at BGU’s Department of Mechanical Engineering and head of the Bio-Inspired and Medical Robotics Lab, together with student Liran Yehezkel. "The R STAR is ideal for search and rescue operations in unstructured environments, such as collapsed buildings or flooded areas, where it must adapt and overcome a variety of successive obstacles to reach its target," Zarrouk said in a Wednesday statement.

BGU said the team is now working to develop a larger version that can climb over larger obstacles and carry more than four pounds of sensors and supplies. The smaller robot will piggyback on the larger robot and deployed in hard-to-reach areas.