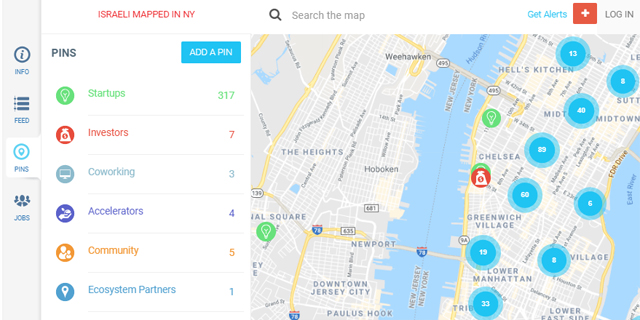 350 startups founded by Israeli entrepreneurs are currently operating in New York, most of them in the fields of enterprise software, fintech, cyber, and retail tech, sectors focused on data collection and artificial intelligence

As of the beginning of 2020, nearly 350 startups founded by Israeli entrepreneurs will be operating in New York, with the vast majority of them concentrated in Manhattan, according to new data retrieved from the “Israeli Mapped in NY” project, which tracks Israeli tech entrepreneurs operating in the city.

In the past few years, there has been a change in the nature of Israeli companies that are expanding to New York, according to Guy Franklin, founder of the platform and interactive map and general manager of SOSA NYC. “If we used to see companies in the fields of advertising, video, and companies which are focused on the end consumer, these days, we see more companies focused on enterprise software, such as Monday.com Labs Ltd., fintech, cyber, such as Axonius Inc., and retail, where there is a focus on collecting data and artificial intelligence,” Franklin said in a recent interview.

Israeli companies continue to expand to New York because their investors and target markets are here, Franklin said. “New York is the financial capital of the world with the largest financial institutions,” he added. In addition, Franklin said, the New York City Economic Development Corporation (NYCEDC) allocated new funds for specific sectors with the goal of promoting and transforming New York to be a leader within these sectors. One example is the Cyber NYC initiative aiming to advance the cybersecurity sector in the city while creating thousands of jobs, he explained.

Franklin relocated in 2012 from Tel Aviv to New York as an accountant in Ernst & Young (EY) and today serves as the General Manager of the SOSA NYC open innovation platform, created to support the Israeli entrepreneurs who are expanding to New York and share Israeli tech success stories.

New York is no longer just a place for startups’ sales representatives and marketing teams, as it was at the beginning of the decade, Franklin said. At the beginning of 2020, it is a much more mature ecosystem attracting research and development teams, operations and headquarters of more and more companies, he added. In addition, large companies like Google, Salesforce.com Inc., Spotify, and Facebook are expanding fast in the city, he said.