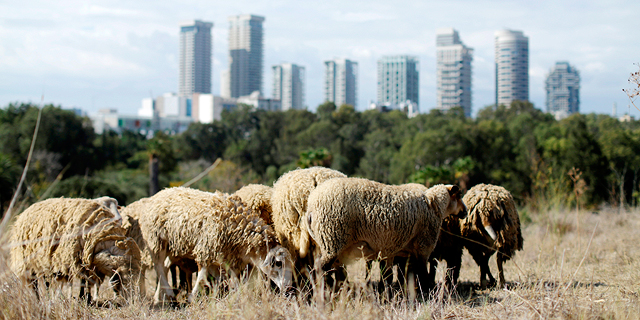 In Tel Aviv, a Herd of Sheep Is Helping the City Bloom

Tel Aviv’s first official herdsman is accompanied by two border collies, Chaos and Fauda: the first only takes commands in Hebrew, the second only in British English

It is morning, and herdsman Asaf Gal is leading his sheep to pasture at Tel Aviv’s Yarkon River Park, accompanied by his two border collies, Chaos and Fauda. Beyond the green, the high rises of Tel Aviv tower over. Gal whistles and gives orders in two languages. Chaos only takes commands in Hebrew, Gal says, while Fauda understands only when spoken to in British English.

There’s little time to waste—the Sheep have work to do. Their job is to help this patch of urban nature bloom again. This herd is a pilot to a more ambitious project, one that will see sheep used to rehabilitate 52 patches of undeveloped nature that remain within the greater Tel Aviv metropolitan area. If successful, more sheep herds could be seen grazing around the city. 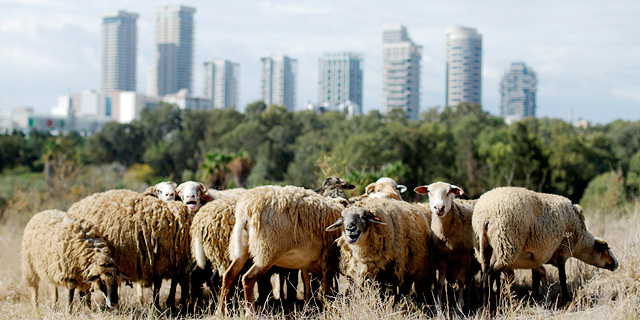 The project is the brainchild of Liav Shalem, an ecologist working for the city’s Ganei Yehoshua Park company. When the sheep graze, he explains, they thin out the grass, just as their ancestors did for millennia. When the sheep disappeared from this region, it caused an ecological imbalance. Grass such as wild wheat and oats overpowered other local species, especially flowers.

With the sheep back and chomping away at the grass, Shalem said, residents can expect to start seeing anemones, daffodils, and irises. Luckily, sheep do not find these beauties palatable. Sheep make herbicides, pruning machines and mowers superfluous. To revive this urban park, we need to get back to the days of yore, Shalem said.

The idea to keep a herd in the middle of the city came from New York City. Goats tend the grass at Brooklyn’s Prospect Park, but they would eat everything, including the precious flowers the city of Tel Aviv wants to see in bloom.

Shalem hopes to see this patch of park in bloom this upcoming February. When he is not serving as Tel Aviv’s designated shepherd, Gal is a dog trainer who trains services dogs. He lives in the posh north Tel Aviv neighborhood Tsahala with Chaos, Fauda, and three other dogs. He herds the sheep once a week for three hours. The sheep picked for the job can count themselves lucky, according to Gal: They are not sheared, and the females are not milked. Their one job is to graze in the open air.

9.
miss
Hi, whereabouts are the sheep located?
8.
Olah
What day of week and what time. Woyld love to see this.
7.
How far does your memory go?
You say the idea came from Nyc... hello?! The indigenous people of the holy land Arab Jewish and other had been doing that before Israel was ever created!
6.
Sustainability
First, they colonize and displace inhabitants. Then they call the previous inhabitants backwards for using systems compatible with the local environments. Gradually they do mass urbanization and complementary mass agricultural supposed “greening”. Ironically, they appropriate the old “primitive” ways and brand it as sustainability. This is why I detested sustainability studies. It’s imperial ideology appropriating what it vilified to solve the problems they created out of ignorance.
5.
Tel Avivians themselves are herd of Leftist Sheep
The ultimate herd of Western Hedonists totally disconected from the Jewish People and Homeland slowly but surely herding themselves to Berlin London NYC La and oblivion as Jews
All Comments