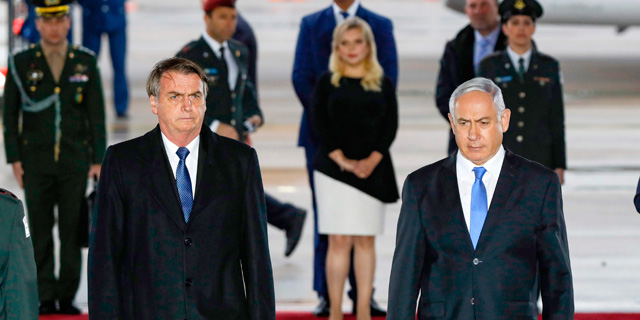 Before his inauguration, Bolsonaro gestured that he will be following Trump’s lead and move Brazil’s embassy in Israel from Tel Aviv to Jerusalem

Brazilian President Jair Bolsonaro arrived in Israel Sunday, 10 days ahead of Israel’s general election, set to take place on April 9. The far-right Bolsonaro was welcomed at the airport by Israeli Prime Minister Benjamin Netanyahu. The two are set to address the media later on Sunday, Netanyahu’s office said in a statement.

This is the leaders’ second meeting after Netanyahu attended Bolsonaro’s inauguration in January. Before his inauguration, Bolsonaro gestured that he will be following U.S. President Donald Trump’s lead and move Brazil’s embassy in Israel from Tel Aviv to Jerusalem. During his recent trip to Brazil, Netanyahu stated that Bolsonaro told him he will be moving the embassy to Jerusalem “by March.”

During his visit, Bolsonaro is set to tour the Jerusalem headquarters of automotive chipmaker Mobileye, which was acquired by Intel in 2017 for $15.3 billion.

Trade between Brazil and Israel is currently around $1.12 billion per year, according to data provided by the Israeli government’s press office. Chilean airline LATAM launched a direct route from Tel Aviv to Sao Paulo, Brazil in December.

1.
Neural Weapons
THE PSYCHOPATHS ARIEL"A" ZUGMAN (NAZI TRAVESTY AND PRIVATE PROSTITUTE OF MOHSEN RABBANI) AND ANA CHAPAVAL ZUGMAN (THE SHIKSE), ARE CONTROLLING A CLANDESTINE REMOTE NEURAL MONITORING STATION FOR MOHSEN RABBANI (IRANIAN PEDERAST) IN CURITIBA-BRAZIL, AND THEY ARE TORTURING AND ASSASSINATING PEOPLE. https://m.facebook.com/pages/category/Community/Neural-Weapons-RNM-Remote-Neural-Monitoring-309180162561405