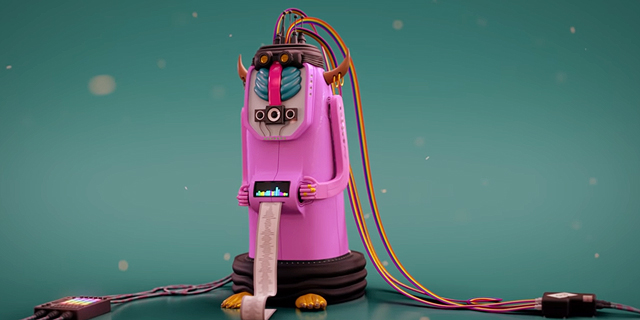 Enterprise software company Oracle collaborated on the project, which was created by analyzing and piecing together lyrics and melody fragments from hundreds of Eurovision songs

Blue Jeans & Bloody Tears, an algorithmically-generated song performed as a duet between man and machine, has set out to be the unofficial anthem of the 2019 Eurovision song contest.

To create the song, hundreds of past Eurovision hits were fed into a deep learning cloud-based system. The system was composed of a melody analyzing tool developed by enterprise software company Oracle Corp. and a lyrics analysis algorithm developed by Israeli poet and programmer Eran Hadas. It produced fragments of text and melody based on the existing songs, which were pieced together to form the final song. The project was led by Israeli digital artist Nimrod Shapira, a former creative director at interactive multimedia video creation company Eko. In a phone interview with Calcalist Tuesday, Shapira said that he could not pass on the opportunity to use machine learning algorithms to explore human creativity. The idea, he said, came about after Israel won last year’s song competition, setting it up to host the 2019 Eurovision, which will take place in Tel Aviv this week. The song was unveiled Tuesday at the Oracle Cloud Day conference in Airport City, Israel. The song, which Shapira describes as a “duet on disillusioned love,” is performed by Israeli singer Izhar Cohen, who won Israel its first Eurovision award in 1978. To create the song, Shapira collaborated with composer and songwriter Amir Sheinfeld and musical director Avshalom Ariel, who produced last year’s Eurovision winning song Toy. The song has a “100% Eurovision DNA,” Shapira said. “It was important for us to preserve the computer’s artistic integrity,” Shapira said, which is how they ended up with lyrics as absurd and dramatic as “tears will always have wet eyes” and “there’s no life without your life in misery.” The song celebrates the Eurovision and everything it represents, Shapira said. “It celebrates kitsch, big drama, camp, and humor.”

3.
the coolest thing ever!
(NC)
2.
AI Song
Significant Improvement over most modern Pop Music! Bravo!!
1.
Versificator
Orwelll predicted that proletarian music would be made by a machine.