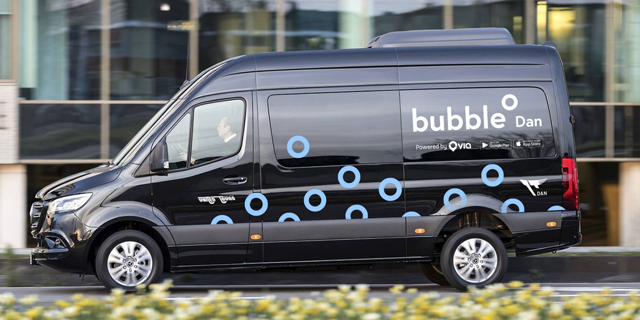 20,000 Users Sign Up for Via's Tel Aviv Ride-Sharing Service in one Month

Via currently operates shuttles in most parts of Tel Aviv and intends to expand to its entire territory as well as neighbouring suburbs in upcoming months.

One month after its launch, 20,000 users have already signed up for New York-headquartered ridesharing company Via Transportation Inc.’s Tel Aviv ride-sharing service, Via announced Sunday.

Called Bubble, the service was launched in April in collaboration with public transportation company Dan Bus Company. Via currently operates shuttles in most parts of Tel Aviv and intends to expand to its entire territory as well as neighbouring suburbs in upcoming months.

Users book rides through a dedicated app,inputting their desired pickup and drop-off locations, and the app devises the most efficient route for each driver based on the received hails. Bubble currently picks up passengers on Sundays to Thursdays, between 6 a.m. and 10 p.m.

Founded in 2012, Via operates in 32 cities across 11 countries, offering different modes of operation in different places. The company has raised $387 million to date.

Fares are set at a standard NIS 15 ($4.13) during rush hours and NIS 12 ($3.3) the rest of the time. Passengers are picked up only at existing bus stops and receive updated information regarding the arrival of the shuttle. Users who are consistently late are be penalized and will ultimately get blocked.