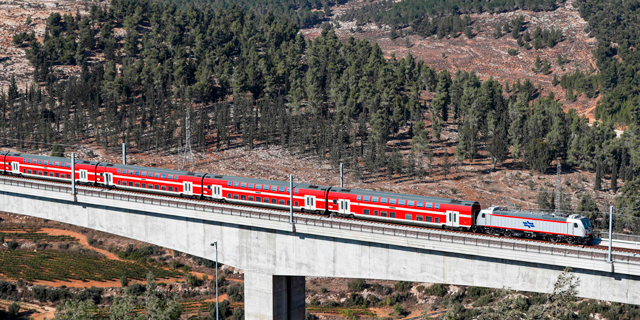 The Jerusalem Express Train Struck by Malfunction Twice in One Morning

On Sunday, Israel’s national train company announced it has temporarily reduced the frequency of trains on the route due to a malfunction in one of the train’s systems; later that a train got stuck in its tracks

The train connecting Jerusalem with Ben Gurion International Airport continues to be plagued with malfunctions. On Sunday morning, Israel’s national train company Israel Railways Ltd. announced it has temporarily reduced the frequency of trains on the route from twice every hour to just once, due to a malfunction in one of the train’s systems. The announcement did not specify the nature of the malfunction.

Later on Sunday morning, Israel Railways announced that due to another technical malfunction, an airport-bound train from Jerusalem, carrying about 300 passengers, had halted in a tunnel in the vicinity of the city. Due to the incident, the company announced it will be shutting the route down completely.

Within several hours, Israel Railways announced it has resolved both malfunctions and that the trains on the route will resume normal operations.

The Jerusalem-Ben Gurion Airport train route was launched in September 2018, after nearly two decades in the making, and has been riddled with malfunctions and interruptions ever since . The route was first approved by the Israeli government in 2001 as an express 28-minute train connecting Jerusalem and Tel Aviv, but currently only gets as far as the airport, 19 kilometers southeast of Tel Aviv. The complete 57-kilometer route currently has no official date of completion, though Israeli officials have previously stated it will be operational by early 2019.