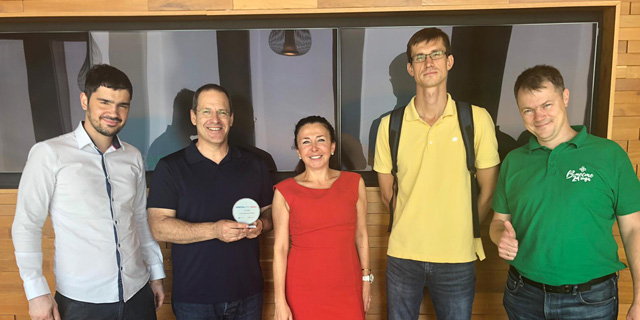 Anagog Ltd., an Israeli startup developing location analytics technology, has been awarded a contract with London-listed Russian supermarket chain X5 Retail Group NV, the former announced Wednesday. Anagog won first place at X5’s Retail-Tech Challenge competition held Tuesday in Tel Aviv, guaranteeing it the contract. The details of the partnership were not disclosed. A spokesperson for Anna Moshe, the chairperson of the Israel-Russia Chamber of Commerce and the competition's organizer, told Calcalist that Anagog company executives will be flying to Moscow to sign the contract in the near future, but did not reveal further details about the collaboration, besides the fact that X5 will be piloting Anagog’s technology at some of the retailer’s locations.

X5 is one of Russia’s largest food retailers, having reported revenues of more than 1.5 trillion rubles (approximately $23.6 billion) in 2018. Russian-Israeli business magnate Mikhail Fridman, is one of the company’s largest shareholders. Founded in 2010 and based in Tel Aviv, Anagog develops technology that collects real-time data from smartphone sensor signals and analyzes it to gain insights and make predictions about consumer preferences according to users’ mobility status, location, and behavior of smartphone users. Anagog's technology is implemented in more than 20 million smartphones globally, through 100 mobile services in different domains, according to information by the company.

Volkswagen subsidiaries Porsche and Skoda, as well as Stuttgart-based automaker Daimler AG  have previously invested in the company.