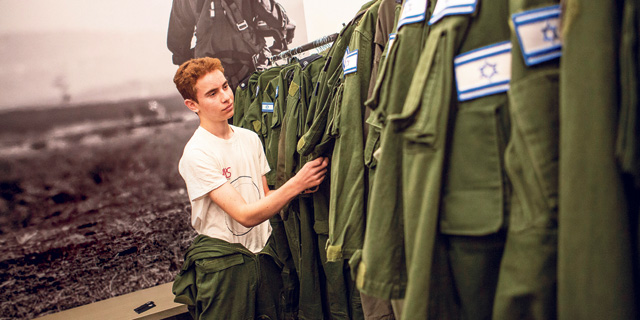 Fun and Games and Shooting Down Enemy Planes

In Israel, the new trend in summertime fun is military-themed summer camps and courses, with activities ranging from recreating famous air battles in an F16 simulator to countering military cyber attacks

In a room located inside a central Israeli movie theater complex, kids in flight suits are attending a briefing. Their mission today includes flying south, over the Israeli cities of Ashkelon and Kiryat Gat, a course they will have to chart themselves. Their vessel is a state-of-the-art F16 fighter jet simulator developed by American aerospace manufacturer Lockheed Martin. Brigadier General (res.) Ilan Boger is giving the brief. As an Israeli Air Force (IAF) pilot and former squadron and airbase commander, he has given countless such briefs and debriefs to professional combat pilots. Now, he commends a group of summer campers at the Squadron, an air force-themed activity center operated by a group of former and current air force personnel. 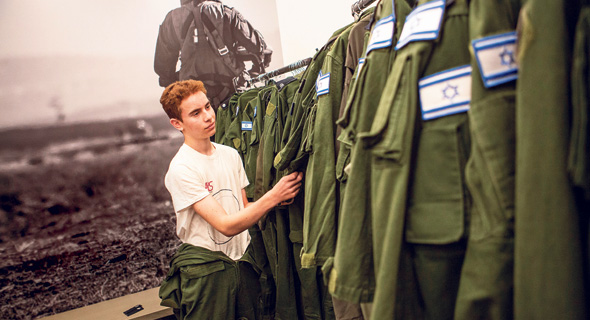 The Squadron is designed to look like a real-life F16 fighter jet squadron, complete with briefing rooms and 10 flight simulators. As part of its summer activity agenda, kids recreate the 1981 Israeli air strike that destroyed an Iraqi nuclear reactor near Baghdad. Dubbed Operation Babylon, the surprise attack has since been inducted into the Israeli military hall of fame. In another part of Israel, school-age kids on their summer vacation are training in Krav Maga, the martial art form developed by the Israeli security forces. Activities bear names such as “preparation for operational fire” and “counterterrorism 101.” A local paintball company offers daily activities designed based on the Israeli Defense Force (IDF) enlistment process and basic training, moving participants through a military-style obstacle course and teaching them how to fire semi-automatic (paintball) weapons. But not all army-inspired summer fun is about combat and fending off pretend attacks. Like the real Israeli army, which is mandatory for most Israeli citizens, military-inspired summer camps offer something for everyone. One of the most sought-after military units is the infamous Unit 8200, the Israeli army’s NSA equivalent known to secure its veterans lucrative careers in the Israeli tech sector. Tech-leaning kids can now use their summer vacations to train in thwarting cyberattacks and other skills that could help them secure a place at Unit 8200 and other top cyberwarfare units when they reach enlistment age. “These summer camps are an expression of the cultural militarism that characterizes Israeli society,” Kobi Michael, a senior research fellow at Tel Aviv University’s Institute of National Security Studies (INSS), told Calcalist in a recent interview. In Israel, the military enjoys great prestige and appreciation, coming up at the top of the list of trusted national institutions, he said, which is why it is so present in Israel’s collective culture. During the summer months, the Squadron offers a three-week youth leadership workshop, which includes 15 four-hour sessions. Week one starts off with basic aviation lessons: how to take off, control the plane, navigate, land, and perform maneuvers. By the end of the week, the kids have “qualified for solo,” meaning they are ready to operate the flight simulation independently. During week two, participants will learn how to fly in formation and have their first taste of air battles and air strikes. The final week will see them take on advanced tasks: planning and executing a flight, briefing and debriefing. 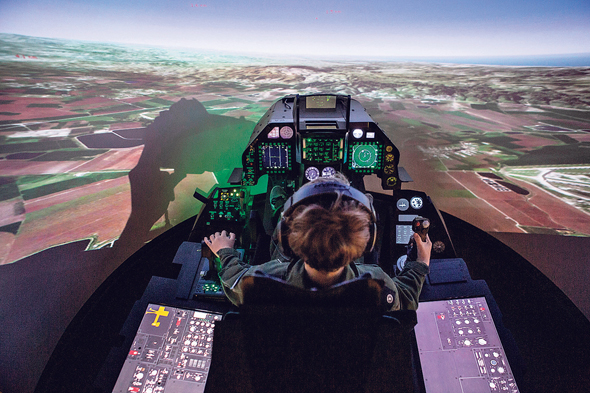 “The ethos of the fighter pilot is strong in Israeli society, and many kids want to experience it,” Colonel (res.) Ariel Brikman, IAF flight instructor and former airbase and squadron commander, told Calcalist in a recent interview. “It is a really cool experience to fly a real F16 simulator and meet real pilots,” he said. “But it is just a platform through which we get to talk about values and work on skills that would serve them outside the simulator.” Twelve-year-old Lihi Blitzblau is one of the participants in the Squadron’s program. “I’m the kid who really, really, loves the military,” she told Calcalist. “My dad was in the army for 20 years, and when I heard about the Squadron I was immediately excited,” she said. “I went to so many regular summer camps, and they are all the same, one day you go to the amusement park, the next day to the pool. There’s never this moment when you say: this is something I haven't seen yet. Here, everything is new,” she said. Plus, she added, it feels really authentic. “This is not flight school,” Boger told Calcalist. “We are not trying to produce pilots, just to give kids life skills. To know how to look at something you did and say whether it was good or not. To be prepared. That is how they trained us in the air force.” According to Boger, among the values bestowed during the program are how to work as a team, how to ask for help, and paying attention to others. “Working with the simulators just helps shed light on things. We treat the kids at eye level. They are not here to pass the time, they are here to receive values,” he said. “When I dreamt about this type of place, I thought about teenagers,” Colonel (ret.) Kobi Regev, founder of the Squadron, told Calcalist. “I wanted to teach them about precision, about professionalism, why it is important to work as a team, how to bounce back from failure. Even great pilots experience painful falls, and you need to get over it quickly,” he said. 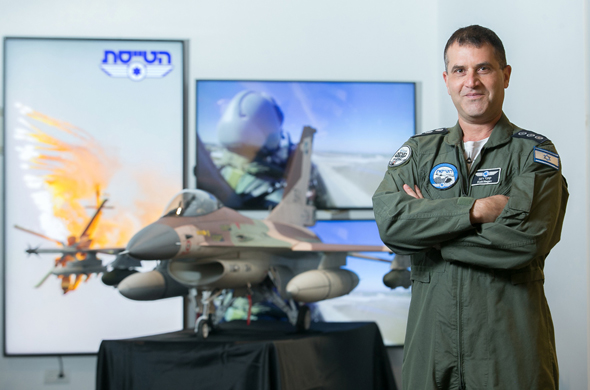 "Stop the attack or I'll remove you from this class,” guide Shahar Ofek warned one of the kids at a cyber summer course in the greater Tel Aviv metropolitan area. The kid had successfully cut off Ofek’s internet connection. More than a sign of youthful misbehavior, this is an indication that the lesson had sunk in. In this course, the objective is to teach kids how to fend off real live hackers. Harari Computer Studies offers coding and cybersecurity summer courses to children as young as 11. On its website, the company waxes poetic on the importance of cyber studies with phrases like “growing threats” and “security intelligence.” “Most people think that cyber is like in the movies, you push a few buttons and intercept a missile,” Ofek said. “It isn’t like that at all, it’s a sisyphic process,” he said. “We teach the kids python programming language, which hackers use, and we teach them how to write code and how to use hacking tools. If you know how to hack you know how to protect, and vice versa.” According to Ofek, each one of the kids participating in the summer program already knows how to block someone from getting online. One of them pulls this trick on him on a daily basis, he said. Another kid broke into his neighbors’ printer and then informed them of its vulnerability. In class, Ofek said he tries to teach them the fine line between a bit of cyber fun and criminal activity. “I teach them how to be white hats, not black hats,” he said. Across 10 two-hour classes, kids learn web protocols, how to conduct and counter a phishing attack, what are malware, how to use them, and how to write them. They also learn how to carefully trade on the darknet and deep web. Later, they will learn python, with lessons such as writing a network scanner, games, and a machine-learning algorithm for pattern recognition. Kids who want to enhance their studies can add a daily three-hour Java course. “The content here is at an academic level,” Nurit Harari, a computer science teacher and the owner of Harari Computer School, told Calcalist. For over a decade, she has been teaching courses and summer activities to kids. “Our courses demand strong ability and motivation. You don’t come to play, there’s no pool. We deep-dive into coding, and all the kids here are very goal-oriented, with a desire to serve in a prestigious technological unit in the army or secure a future career in tech.” Ten-year-old Oded Birenbaum told Calcalist he first became interested in coding a year and a half ago. Teaching himself Python through YouTube videos, he then moved on to Java. For a while, he has been seeking a more organized frame for learning. “My dream is to be a high-ranking software engineer for Microsoft or Amdocs, and I want to serve in Unit 8200,” he said. “I want to be a white hat, the one who stops the hackers with the black hats. White hats hack, say, for the Mossad, to find out things needed to protect the country, unlike black hats that are interested in criminal things like money or world domination.” 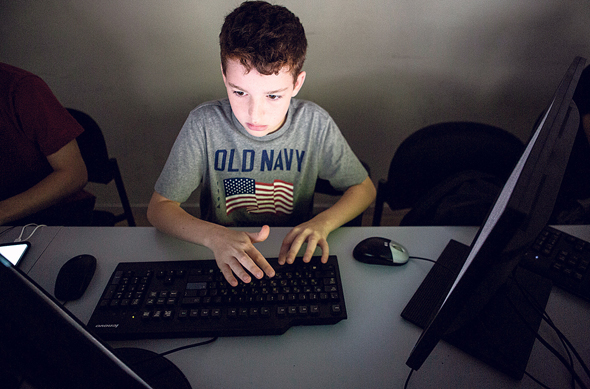 A paintball field near central Israeli town Kfar Saba looks a lot like a typical IDF training camp, complete with camouflage nets. On a recent summer day, 150 summer camp kids arrived here for bootcamp training. “Get in line, nobody talks, listen up,” shouts a stern paintball guide, likely recalling her days as an IDF squad commander. “Who can list the Israeli security forces?” Finding the kids’ answers—army, police, ambulance—to be incomplete, she tells them about Yasam (Israel Police Special Patrol Unit) and Yamam (Israeli counter-terrorism unit).

“When I ask you a question, you will answer ‘yes ma’am’ or ‘no ma’am,’ is that clear?” she shouts. This newly formed kiddy squad’s first order of business is to go down for five push ups.

Yadin Elbaz is the manager of the paintball field. In a recent interview with Calcalist, he explained that the activity is designed to make kids feel as if they are part of a “special forces” unit. They move throughout the day as if completing various stages of enlistment, are shown order drills, and face a military-style obstacle course. Older teens come for daily activities in a special set designed for urban warfare: densely-built houses, burned vehicles, and sniper posts. “Kids who play Fortnight all day look for real life activities that resemble the onscreen experience,” Elbaz said. 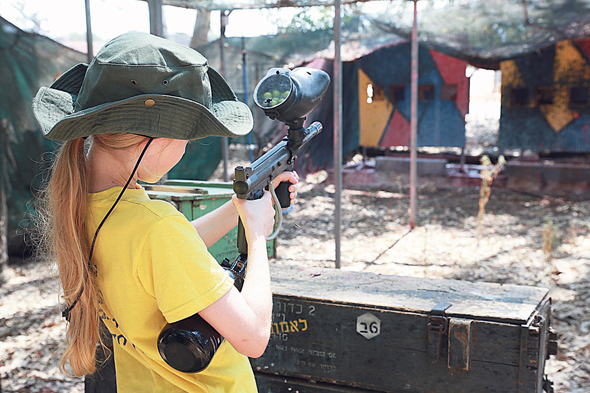 While they offer activities designed after real military tasks, like shooting down enemy planes and thwarting a cyber attack, most of these summer programs try to keep military connection as inconspicuous as possible, billing the activities as “youth leadership workshops” or “professional summer classes” for kids, and not as a type of pre-military venture.

Ami Niv’s summer camp in the Israeli town of Hadera is the exception. It offers, according to the ads, Krav Maga training and other combat preparation to kids as young as seventh graders. Among the activities taught are self defense against cold and hot weapons, counterterrorism 101, and something called “aggression training.” 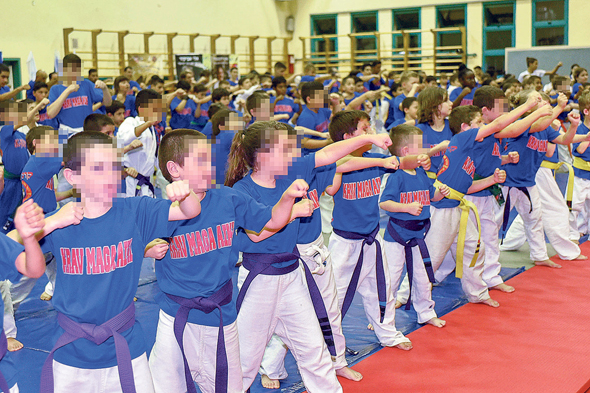 Ami Niv said he developed an educational program that starts early and leads all they way to enlistment age. “Our content represents knowledge that’s necessary to life here. Living in this country means you must be prepared for a terror attack,” he said. “We call our programs ‘training camps’ and kids as young as 12 train in simulations of attack. Our bodies are weapons of self defense, and when necessary—of attack as well.” “Today kids as young as 13 and 14 become interested in the different military units,” Moshe Yalovich, a Krav Maga instructor at the Ami Niv summer camp, told Calcalist. “It is linked to the gaming world they spend most of their time in, like Fortnight,” he said. “We take it from the screen to the real world, and the parents are happy that their kids get some time off screen.”