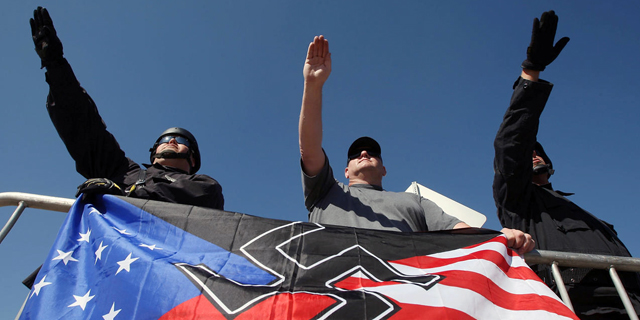 Living With Neo-Nazis: Seven Years in the Belly of the Beast

Sociology professor Peter Simi lived among U.S. white supremacy activists for seven years, and knows how they think, why they are rising in prominence, and maybe even how to stop them

On August 5, 2012, 43-year-old Wade Michael Page drove to a diner in Wisconsin where his ex-girlfriend worked. Upon learning she was not there, he entered a Sikh temple up the road and opened fire with a semi-automatic pistol he bought, legally, eight days prior. No one knows why Page decided to do so, killing six people and injuring another four before shooting himself in the head. After his general discharge from the U.S. army in 1998, Page became a white power skinhead, with ties to several white supremecist and neo-Nazi groups, including the Hammerskins, described by the anti-defamation league as as the U.S.' best-organized neo-Nazi skinhead group. His outspoken hatred was focused mostly on Jews and African Americans, so his decision to go after Sikhs left people perplexed. 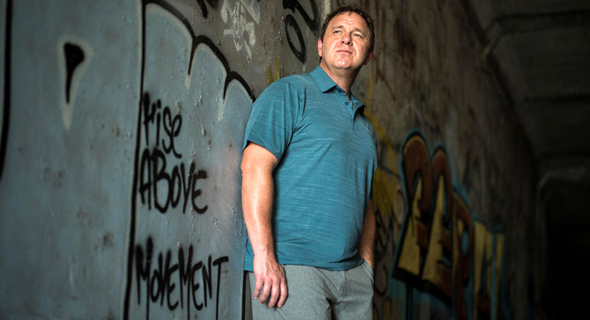 Among those stunned by the news was Peter Simi, a Chapman University professor who studied white power and neo-Nazi groups in the U.S. for over two decades, and lived among them for seven years during his studies. He knew Page personally—he lived with him for several months, a decade before his murder spree. He hung out with people like him, lived in their houses, went to their festivals, laughed at their racist jokes. 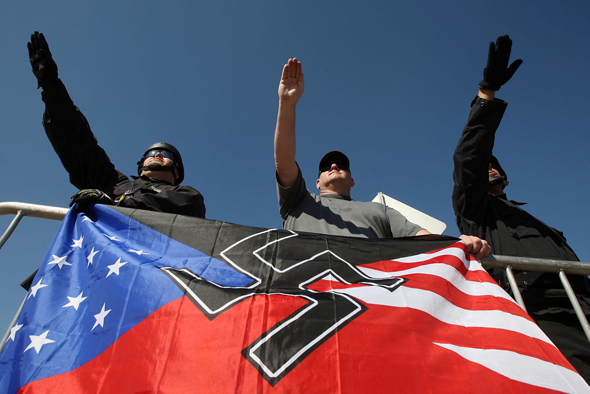 Recruitment today is performed mainly online, Simi said, but face-to-face recruitment exists as well, via two surprising avenues: mixed martial arts clubs and music festivals. The MMA-music combo was widely covered in April 2018, when 1,000 neo-Nazis convened in eastern Germany, in the Polish border town of Ostritz, to celebrate Adolf Hitler’s birthday. At the Schild und Schwert (Shield and Sword) festival, participants wore shirts bearing slogans such as “Adolf was the best” and “white is my favourite color,” bought racist merchandise, listened to heavy metal bands, and watched an MMA tournament organized by a white supremecist club. MMA clubs are a big thing in the U.S. now, even more in Europe and Russia, where there is a large neo-Nazi group called White Rex, Simi explained. In Ukraine a lot of MMA clubs mix in white supremacy tenets, and in Germany clubs are also targeting kids with the same messages, he said. At the same time, music and musical scenes were always an avenue through which neo-Nazis recruited. “They have their own events, but they also take part in existing music scenes such as punk and heavy metal,” he said. MMA clubs and music festivals provide a safe space for racist movements. Since they espouse ideas that go against mainstream thought, they need spaces that will enable them to tell stories, try out new concepts, interact socially, and create and express an identity, Simi said. They also use them for logistics and strategizing. “It is very important if you are part of a stigmatized group, otherwise your opinions can dissipate,” Simi said. While MMA and music can be used to recruit outsiders, the children of neo-Nazis are recruited at home. Simi spent hours sitting in the living rooms of white supremecists, listening to them teach their kids about race wars, about darkies and faggots and Jewbags. He took part in birthday parties where the cakes were shaped as swastikas. He saw children gifted toy soldiers decorated with SS symbols. He met kids who saluted their parents with the Sieg Heil salute. For such people, family is the basis of the movement, Simi explained. For white supremacist parents, the objective is to pass your beliefs on to your kids, or the white race will not survive. They believe the white race needs people that will give birth to more kids with “racial awareness.” Sometimes these kids are home-schooled, but if they attend public schools, they are taught the symbols, gestures, and music at home, he said. Simi recalls one five-year-old who could do the Nazi salute and sing along to neo-Nazi music word-perfect. “They dress their children like Nazi soldiers, skinhead warriors, or Ku Klux Klansmen—anything to integrate young kids into the movement,” he said. “It normalizes the movement. The kids don’t know anything else.” It is hard to shake beliefs acquired at such a young age, Simi said. When kids hear the N-word at home and are taught that black people are more prone to criminal activity, the messages they receive when they come into contact with other white supremecists sound familiar, he said. “They are preconditioned.” Some parents understand that being too extreme risks rebellious children going in the other direction, so they stress the importance of maintaining traditional values and being proud of your racial background rather than focusing on demonizing others, Simi added.

The good news? You can get out. During his studies, Simi interviewed a boy raised on white supremecist values since birth. “Instead of playing regular war games in his backyard, he played Kill the Jew,” Simi said. “That’s what he was taught.” Then, in middle school, he was sent to public school for the first time. An almost all-white area, but he was still exposed to different ideas than those he heard all his life. He started having doubts, listening to “forbidden,” liberal music like grunge. In high school, he no longer identified with the movement and his family’s ideals. Eventually, Simi said, his parents and siblings followed, and today none of them are involved in the movement. Another of his acquaintances was a member of a white power organization. Her daughter was shot, and saved by two black doctors. The incident led the woman and her husband to try and change their racist outlook: they relocated to a mixed community in southern California, and got along with their latino and black neighbors. One day, the woman made an order at a fast food restaurant and when she exited she realized the cashier got her order wrong. The cashier insisted she did not make any mistakes. “Those Mexicans, they barely speak English and she accused me of trying to avoid paying for my food, so I got angry,” the woman told Simi. She called the cashier racist slurs, added a few white power slogans and a Nazi salute, and then stormed out, got into her car, and burst out crying. She was embarrassed, and angry at herself for the outburst, she told Simi. “I don’t do that stuff anymore, but I was so angry that all I saw was red, and I wanted to beat her to death,” the woman recalled. When a person leaves a racist movement, sometimes he or she will go through a long journey before they can change their perspective, Simi explained, adding that leaving the group doesn’t necessarily mean leaving those ideas behind. It is the state’s responsibility to help those people rebuild their lives, he added. The first step to stop the rise of white supremacy is to stop ignoring it and recognize there is an issue, Simi said. “It might sound simple, but the U.S. failed, miserably, in recognizing how deeply white power-based violence has become entranched, and it is hard to make progress when the default is denial.” Something like the South African post-appertehied model of the Truth and Reconciliation Commission could help, Simi said, but reconciliation is not possible without truth. So his second recommendation is education, starting even before kindergarten. Kids need to be taught to see differences as an asset and an advantage, not as a barrier. It should be one of the first building blocks of education, he said, but regrettably, the system usually does not tackle these issues before middle school or high school, and by then, it is too late.

3.
Why the govt?
Why "It is the state’s responsibility to help those people rebuild their lives"? They do need help. By why is it the govt always the answer to problems?
2.
Interesting, but..
While this is really interesting and eye-opening, white supremacy is a very limited phenomenon. I'd reckon that if you'd try to find how many members there are you'd be hard pressed to find even one thousand of them.On the other hand Islamists are the true real and present danger to the whole of civilization. I'd like to see something written about that, Calcalist! Or is it too hot to handle. Right let's all keep our mouth shut, at our own peril.
1.
Very interesting
Very good article