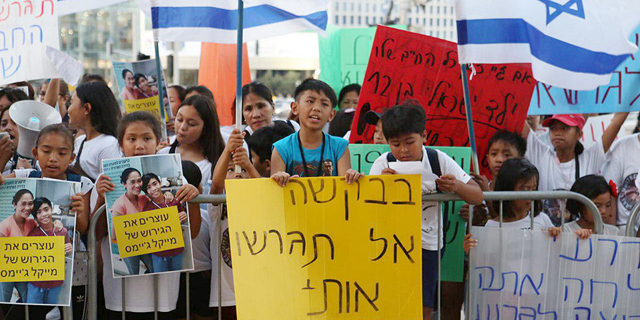 Since July, Israel has arrested dozens of migrant nursing workers whose visas have expired, along with their children who have been born and raised in the country. Last week, a mother and her 13-year-old son were deported to the Philippines despite their pending appeal

More than 30 top Israeli tech and industry leaders have banded together in an appeal to Prime Minister Benjamin Netanyahu, asking him to halt plans to deport children born to migrant workers in Israel. In a letter sent to Netanyahu Monday, the signees stated that "a few hundred kids cannot threaten Israel's unique character" as the state of the Jewish people. 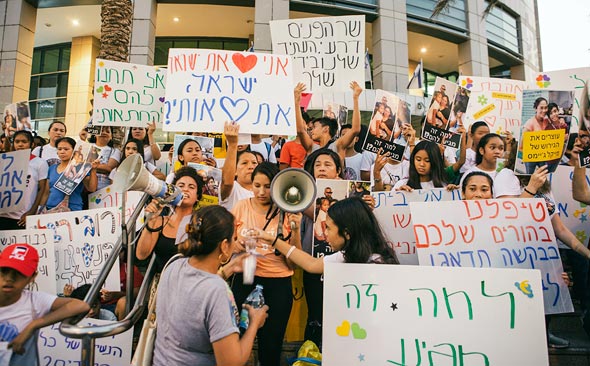 Protesting the deportation of migrant workers and their children from Israel. Photo: Tommy Harpaz

The children in question are the offspring of nursing workers, mostly from the Philippines, who arrived in Israel legally to work as caregivers for the elderly. Israel currently has around 60,000 migrant nursing workers, 80% of which are women, and 50,000 of which have valid work visas, according to data from Kav LaOved, a Tel Aviv-based nonprofit dedicated to maintaining labor rights in the Israeli industry.

Migrant nursing workers in Israel are not protected by laws limiting the working hours of Iseali citizens, and can be employed on a 24-hour basis as live-in caregivers without being paid overtime. This, along with relatively low financial support by the state for the elderly, makes hiring a migrant worker the only viable option for many Israelis in need of constant care.

Unlike in the U.S. and several other countries, Israeli law gives no special status to children born to foreign nationals within the country's borders. While migrant workers in Israel are eligible for maternity leave and a birth grant, same as Israeli citizens, giving birth may affect their visa status. Under Israeli law, a caregiver that gives birth during her initial 63-month visa period can choose whether to keep the child in the country with her until her visa expires, likely without being renewed, or send the baby back to her homeland before returning to work. A caregiver that gives birth after her initial work permit period has passed must exit the country with the child, and can return—alone—only if her latest employer is willing to give her her job back.

Since February, public outcry began to surface as Israeli media reported that Israel's Administration of Border Crossings, Population, and Immigration has begun to issue deportation orders to migrant workers whose visas were not renewed and their children.

Around 600 children, most of which are integrated in the country's public education system are currently facing deportation. Earlier this year, the state agreed to halt deportations and arrests until the end of the school year, in late June. Since July, dozens of migrant workers and their children, some as young as babies, have been arrested by immigration officials and scheduled for deportation.

In some cases, such as that of a Filipino woman called Rosemary Peretz and her Israel-born 13-year old son Rohan that were deported last week, they are being put on a plane while their appeal is still pending discussion in an Israeli court.

In Monday's letter, the signees state that the children's mothers have nursed the country's parents and grandparents for years and "are now being deported solely for bringing a child into this world." They also mentioned that in 2009, under similar circumstances, the state granted temporary residentship to several hundreds of children and their families, and urge Netanyahu to do the same now.

4.
just 70 yrs ago every country let every jew to come in to start a new life..
...it has happened many many times in 2000 year jewish history in Europe. It happened and it will happen again, no doubt. If Israel will treat Filipino caretakers living in Israel the same way the Nazis did in 1930s, nobody will help jews anymore when the time comes. Hopefully it never happen, but the history tells us otherwise. But that is not the main reason. Israel has become a state without any sense of humanitarian understanding of the basic principles of human life. Jewish population of Israel is getting smaller. Today it is only almost 65%! It's is not a secret that many young Israelis understand that there is a better life anywhere, but Israel. How Israel treats foreign workers reflects and influences the younger generations of israelis. Israel need to learn to take good good care of its foreign workers and treat them with utmost respect.
3.
Deportation of non-Jews from Jewish State Israel
Only a extreme Right Wing governemnt is able for such an inhuman act. It reminds me of similar activities of Nazis in 2nd ww. Apparently our current government is trying to copy Nazis and Fascist Police. Fie!
2.
deportation
deporting our foreign workers should awaken memories of jews deported from their homes in world war 2. what have we become?
1.
For your own sake...
please don't do the same as Europe. For foreign worker with kids born in Israel, it would be a trauma to have to move back to their country, while it wouldn't be for children of diplomats, high tech workers etc... ?! Please never buy that. Those so called leftists (I don't buy they are from the left) are so racist (that why I don't buy it) that elsewhere is automatically so bad that it is very bad to tell them to leave the country. I worked in several countries, and it never was a trauma when I left. It even was not a trauma once when I was fired. I just found a better job, better paid. I mean that people just have to build their path given the situation they encounter. For exemple, for south-eastern workers, going back to their own country is not going back to hell. There now more developed countries, in some aspect with even probably a brighter future than in Europe for example.