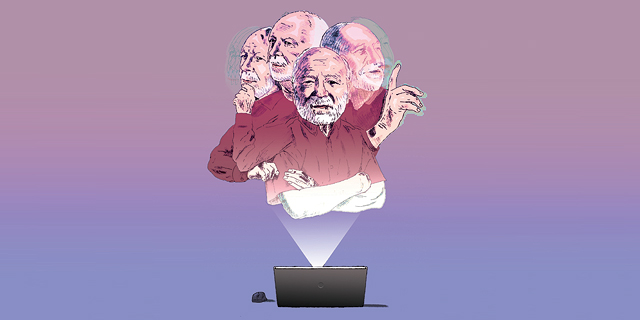 After Death, There Is the Bot

Journalist and author Andrew Kaplan is the first guinea pig of HereAfter, a startup that aims to preserve the dead as virtual avatars, raising questions about what makes a person, the changing approach to grief, and humanity’s desire to document its loved ones—and itself

In June 1967, as Israel was preparing for the military conflict that will later be known as the Six-Day War, people were frantic with fear of annihilation. The U.S. embassy called on all American citizens in the country to register so that their relatives back home could be notified in the possible case of their death, Brooklyn-born Andrew Kaplan recalled in a recent interview with Calcalist. Back then, the California resident was living in Israel, serving as a soldier in the Israeli military. On his way to the embassy in Tel Aviv, Kaplan felt ill and made a stop at a pharmacy. Waiting in line, he heard an elderly woman ask for a large number of sleeping pills. She wanted to kill herself if the Arab armies win, she told the pharmacist. The pharmacist refused, saying it would be illegal for him to sell her the requested amount. Bearing her arm to show the pharmacist the number tattooed on it, she told him that she was a Holocaust survivor, a former prisoner at the Bergen-Belsen concentration camp. Under no circumstances would she go through such an ordeal again, she said. After looking at her for some time, the pharmacist went into the back and returned with a box of pills. Before handing it over, he rolled up his sleeve to show her the number on his own arm.