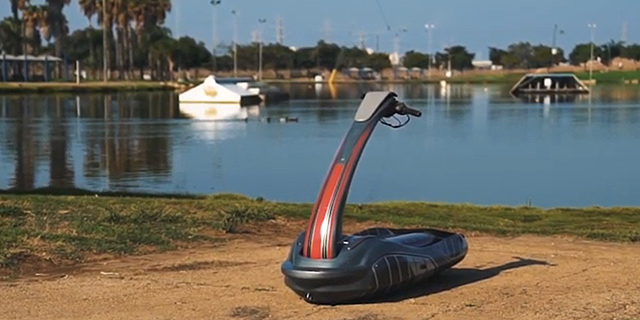 Sick of the hassle of using a regular jetski, Amir Shahar developed a fully electric jetski that fits in the trunk of a car

Amir Shahar got tired of dealing with his heavy jetski every time he wanted to go to the beach. The jetski’s tow trolley needs to be connected to a car, the heavy jetski must be transferred onto it, and the jetski’s fuel and engine oil is also a hassle to deal with, Shahar said in a recent interview with Calcalist. So, Shahar decided to go full electric.

An engineer by trade and the owner of central Israel-based electric gate manufacturer Agro Gates and Automatic Barriers Ltd., Shahar partnered with his father-in-law, also an engineer who retired from the aerospace industry.

An electrical jetski can be kept in the trunk of a car or on a yacht, enabling its owner to ride it at any given time and minimizing the hassle, Shahar said. Shahar has already built a first prototype for an electric jetski that he designed from the ground up, and is currently working on additional prototypes. The jetski runs on a lithium battery, and can reach a speed of 70 kilometers per hour, Shahar said. Shahar and his partners have so far invested NIS 2 million (approximately $570,000) into his pursuit to create hassle-free jetskis. He is currently trying to raise an additional $2 million to market and produce the jetskis in the U.S.