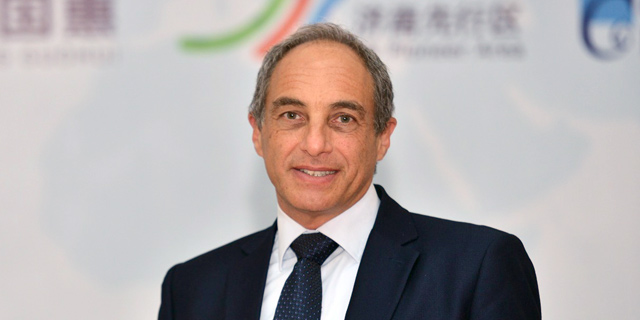 Edouard Cukierman of Cukierman & Co. and Catalyst sees potential in the mounting trade tensions between the U.S. and China, and thinks Israeli companies should steer clear of Chinese politics

China’s involvement in the Israeli tech industry is a hotly discussed topic. Increased U.S. restrictions on Chinese companies are diverting investors’ attention to Israel, where the local tech industry is booming, having reached a six-year high in funding. At the same time, a government plan to establish an agency that will oversee foreign investments in Israel has resurfaced, leading to two intense cabinet discussions on Tuesday and Wednesday and culminating in a decision to set up an advisory body within 45 days—though one that will not have any veto power or authority over the country’s tech industry. There has been much worry in the local tech sector over the possible ramifications of increased government interference. In reality, however, the government has very little power to interfere with Chinese investments in Israel’s private sector, according to Edouard Cukierman. The chairman of Israel-based Cukierman & Co. Investments House and managing partner at Catalyst funds, Cukierman has been working with Chinese limited partners and investors and assisting his portfolio companies to break into the Chinese market for many years.

The government has some ability to exert control in regulated industries such as telecom and insurance, as well as in the defense sector, Cukierman said in a Wednesday interview with Calcalist. But when it comes to the private sector and especially the tech industry, the government is in a pickle. Israel—unlike countries such as France and Canada—has no real tradition of government funds invested in local companies, which would have enabled it to exert some kind of control as a shareholder and compel companies to reject Chinese investments, Cukierman said. Israel’s main economic growth comes from its tech industry, which has to date been mostly unregulated, Cukierman said. When Mobileye—one of Catalyst’s former portfolio companies—was acquired by Intel for $15.3 billion in 2017, all the politicians took credit, he said. “We never saw the government interfering with the company.” A member of the board of several Israeli companies, Cukierman said his allegiance is to the companies. “We can’t reject an investment because of a general government sentiment,” he said. “There is a huge opportunity for Israeli companies in China. Over the last seven years we’ve hosted about 100 billionaires from China, in addition to delegations and participation in conferences. We are continuously seeing interest from investors in China, and it is growing because the Chinese have a lot of respect for what Israel has to offer, for Israeli innovation, and for what it could mean for the success of Chinese companies not just in China but globally.” The growing tension between the U.S. and China will accelerate the trend, he said. Some companies operating in sensitive domains like cyber or defense who do most of their business in the U.S. may choose to reject an investment from a Chinese company, Cukierman said, but in many cases a Chinese company looking to obtain a technology does not care if the acquired company is operating in the U.S. As a businessman and shareholder, he owes it to other shareholders to choose the best offer, he explained. “This is our role as board members, and American board members will do the same if the higher offer is from a Chinese company,” he said. The mounting tensions between the U.S. and China have also been reflected in warnings U.S. officials have issued to Israel regarding Chinese involvement in key infrastructure projects such as ports and roads. But Cukierman pointed out that many of the U.S.' existing key infrastructure has been built by or with the involvement of Chinese companies. “How come the Americans can interfere in Israel?” he asked. “It is the rule of the market to go for the less expensive option.” Earlier this year, Aaron Aaron, CEO of the Israel Innovation Authority, compared Israel’s position in relation to the trade war to a boat caught between two oceans. Cukierman shares his opinion. “When there are two gorillas fighting and we are a small insect, we have no role,” he said. “But what I can tell you is that there is now an opportunity for Israel. We have technology that is typically successful in the U.S., we have a lot to offer the Chinese, and the friction gives Israeli companies a chance to offer their solutions to Chinese companies,” he said. “Maybe we will have an opportunity to create a second large market for Israel, after the U.S., and the risk of not being in China is bigger than the risk of being there.” One thing that consistently brings China to the headlines, trade war or no, is the country’s questionable political practices and treatment of minorities. In recent months, the Hong Kong protests and China’s treatment of its Uyghur population have rekindled the discussion. Is that something that should be on the mind of companies and entrepreneurs looking to branch into China? According to Cukierman, Israeli companies should not get involved in such heated political debates. “We have a lot of challenges, we don’t have to focus on politics,” Cukierman said. “I think we expect the international community to look at Israeli companies for what they have to offer and not to get involved in politics and in the BDS movement, and we ask all countries not to be influenced by BDS. It’s something we have to completely dissociate—the technology and trade and export—from the politics.” “We are not in a position to judge people,” he added. Earlier this week, Calcalist reported that Israel-based Viola Group is raising a $250 million fund with government-owned China Investment Corporation (CIC) as a keystone investor, and mostly Chinese limited partners. Some have speculated that it could challenge several of Viola’s new portfolio companies should they wish to operate in the U.S. under the country’s new restrictions. Drawing on his own experience, Cukierman is doubtful. Catalyst has raised funds from Chinese investors before—including China Everbright Limited and the Chinese Post—and its portfolio companies, which belong to a variety of industries, have not run into trouble when choosing to operate or go public in the U.S., he said. More mature companies he has invested in have never opposed his Chinese backers, but rather were glad for their ability to open doors in the Chinese market, he said.