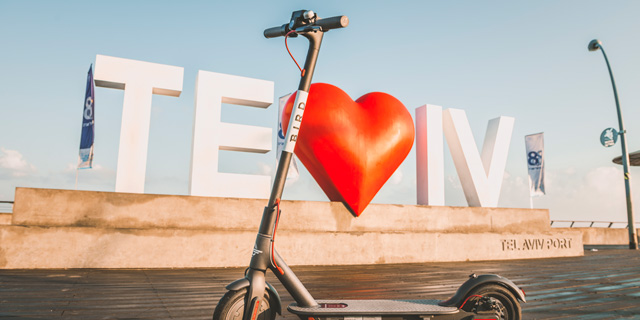 The city of Tel Aviv has taken its fight against rampant electric scooters up another notch. On Tuesday, the city announced it will require shared e-scooter companies operating in the city to install license plates on all their vehicles. The deadline for compliance is December 15.

Three companies currently operate shared e-scooters in Tel Aviv: Bird Rides Inc., Wind operated by BYKE Mobility GmbH, and Lime incorporated as Neutron Holdings Inc. City officials are hoping that by making the e-scooters trackable, they could influence riders to be more accountable. Tel Aviv is trying to curb riders from riding on the sidewalk—an offense that carries a fine of NIS 250 (approximately $71.50). In May, the city announced in a Facebook post that during the first five months of the year 9,000 tickets were issued to electric scooters and bike users who rode their vehicles on sidewalks.Despite heavy fines and enforcement efforts, many riders continue to take to the sidewalks.

To track down e-scooter delinquents, the city is telling residents: if you see something, say something. Or rather, take a picture. The city has created an app on which residents can upload photos of offending riders and tag the location and time. The city will then issue a fine to the felon within 24 hours. Tel Aviv is considered a haven for micro-mobility vehicles thanks to its warm climate and mostly flat terrain. However, the quick rise in the number of vehicles also brought forth safety concerns. In July, the city enacted new regulations designed to police the use of micro-mobility vehicles, such as requiring riders to don a helmet complete with a high visibility strip. Another regulation requires e-scooter and e-bike riders to have a driver’s license or complete specialized training for e-bikes. The new regulations followed a string of accidents involving electric bicycles and e-scooters, some of which were deadly.

2.
Escooters on sidewalks
Good for Tel Aviv. I use pepper spray.
1.
Saftey first
First of all, the drivers in Israel don't know how to drive, second you want us to ride on the in maintained road? I travel to and from work everyday, I have a herniated disc in my back, it would make alot of sense to repair or replace the outdated tarmac roads. But I know the cites spend thier stolen money on other things that have nothing to with the city. Like the light rail they are building in tel Aviv bat yam area. Why not spend the money on dedicated evehicle lanes? Learn to drive israeli