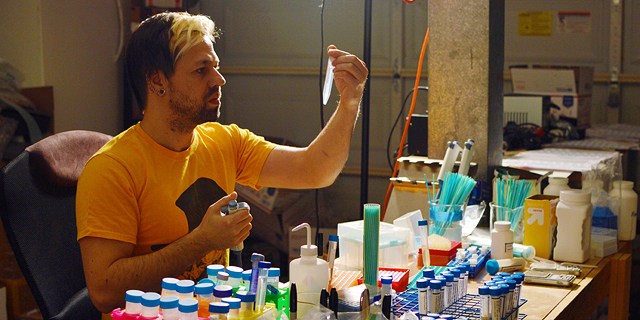 The Bio-Hacker From the Garage Next Door

Dogs that glow in the dark and people who mess with their own genetic code: an Israeli filmmaker went on a journey to visit people who rewrite DNA using technology they ordered online with a few hundred dollars

Like many other people, David Ishee's hobby evolved out of distress. A young man who lived in Mississippi and worked at a local gas field, he survived a violent robbery attempt by two armed men. Some time after that, to fortify his sense of safety, he bought a mastiff, considered the ultimate guard dog. Unfortunately, like many purebreds, the dog suffered from genetic mutations that made it sick and tired. Disappointed, Ishee turned to dog breeding in the hopes of creating a dog that will be up for the job.

Dog breeding has existed for millennia, a manifestation of humanity's need and desire to control and reshape nature. But a few years ago, Ishee's time-old hobby evolved when he learned about CRISPR, a revolutionary technology that makes gene editing more accessible than ever. CRISPER is so inexpensive, in fact, that people can experiment with it in the middle of nowhere, Mississippi. Ishee knew he wanted to use it to clean the genome of purebred dogs from hereditary diseases, but first he wanted to prove to himself and to the world that he knows what he is doing. He chose a more modest—and much more bizarre—project: he is now trying to edit medusa genes into his dogs to make them glow in the dark. 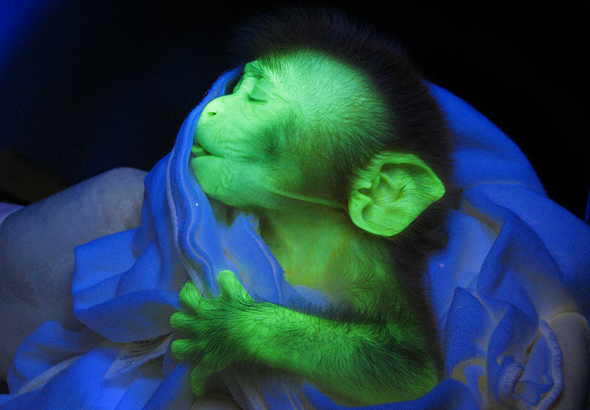 Ishee, who appears in the first scene of Unnatural Selection, a new Netflix documentary series created by Leeor Kaufman and Joe Egender, may appear bonkers. But while he himself has yet to achieve success, the technology he is using is completely applicable. Academic labs have already produced glow-in-the-dark rats, glow-in-the-dark cats to hunt the rats, and to complete the menagerie, glow-in-the-dark monkeys, sheep, and pigs.

Until CRISPR came along, gene editing was complex, very expensive, and basically inaccessible to anyone who was not heavily funded or trained. CRISPR's revolution of genetic editing can be compared to the invention of the personal computer: while we are still far from the day a gene editing kit can be found in any household, initial tools can now be bought online. You have a few hundred dollars to spare and time to learn something new? Congratulations, you’re a genetic scientist. You can now change the canine genome, or the feline genome, or any DNA you want. Even human.

"The first phone call we made was to a geneticist named Preston Estep," Kaufman said in a recent interview with Calcalist, referring to American biologist Preston W. Estep III, who is one of the scientific experts featured in Unnatural Selection. "It was our first interview, still during the research stage. Estep said a lot of things that blew my mind, but one of them did so more than others: we no longer have to accept the laws of natural selection. It can sound bad, but natural selection is cruel. A lot of people suffer due to it.”

Unnatural Selection was born three years ago when Kaufman, an Israeli who resides in Los Angeles, set down for a brainstorming session with Egender. They were talking about basing a project off a science fiction book when Egender brought up genetic editing. “Initially, I thought it was still in the realms of science fiction,” Kaufman said. “I said, you mean there are people capable of slicing the human genome at this very moment? People who think about the world of tomorrow, who understand the ethical and financial dilemmas of the future? Forget science fiction, let’s give them a call.”

The result is a four-episode series that looks at the complexities of the field by consulting experts and academic labs, and also by visiting quite a lot of garages where geeks with genetic editing kits engineer various critters. In one of the labs the two filmmakers visit, in Ouagadougou, the capital of Burkina Faso, a team is trying to take on malaria, a mosquito-borne infectious disease. According to the World Health Organization, 217 million cases of malaria occurred in 2017, with 92% of cases and 93% of deaths occurring in Africa. The team is trying to engineer infertile mosquitoes to eradicate both the bugs and the disease, and the initiative—like similar ones before it—is also drawing much criticism for its unknown consequences on the local ecosystem. The most important question the series brings up is about environmental engineering, Kaufman said. “Our ability to make decisions in this field can create miracles—heal the environment, eradicate severe illnesses, save endangered species—that is huge,” he said. “On the other hand, it brings up very scary questions about interfering in nature, the democratization of genetic engineering, the fear that someone will use this technology to do something bad and make people stop wanting to develop it further. And at this point we didn’t even know bio-hackers exist.” Bio-hackers are private people who decided to take on the challenge of genetic engineering, usually without formal education, sometimes using their own bodies as test subjects. A quasi-leader and unofficial spokesperson of this movement is Josiah Zayner, who has a doctorate in physics and previously worked for NASA. Zayner firmly believes that science should not be the purview of scientists alone. To encourage the public to participate, he partakes in activism that is borderline online trolling, even urging people to experiment on themselves. 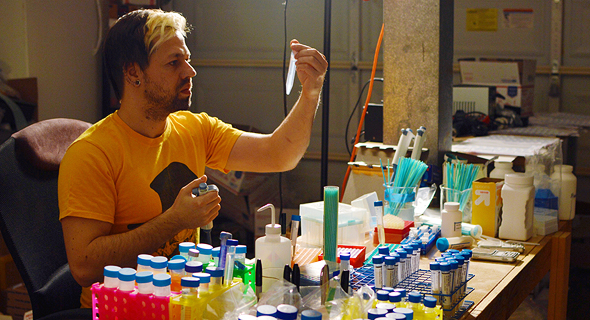