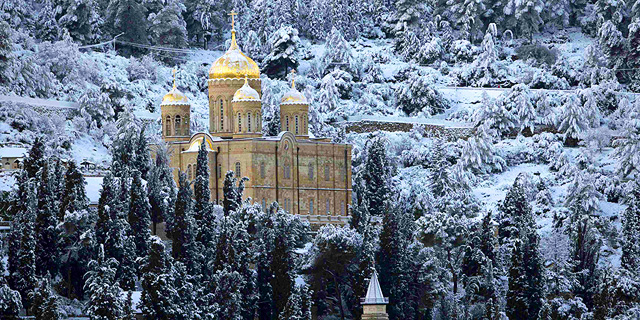 A few weeks ahead of Russian President Vladimir Putin’s planned state visit to Israel, a new—and unlikely—point of contention between the two countries has manifested: Jerusalem’s latest light rail route. The new route set to service the Hadassah Ein Karem hospital necessitates the evacuation of an area near the Russian Orthodox Church’s Gorny Convent, a plan that was met with firm opposition from the church. The new light rail route is one of several major infrastructure projects planned in Jerusalem over the next few years and is expected to cost hundreds of millions of shekels. Already under construction, it is expected to open in 2022. To make room for the rail, the city plans to lower major traffic intersection the Ora junction underground using two tunnels. Without this change, the light rail will interfere with traffic and hinder ambulance movement in to and from the hospital. 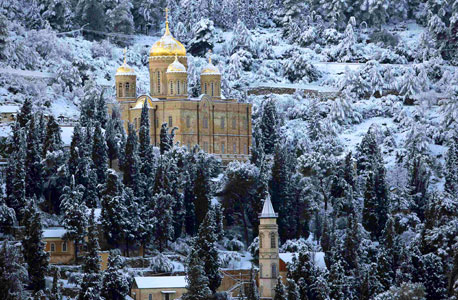 The plan was filed for public scrutiny in January, and the local construction committee is expected to convene and vote on its approval in the coming days. However, last week a religious Russian delegation filed an objection to the plan. In the letter, the delegation expressed worry that the planned work will obstruct access to the church and convent and damage the historical site. They are also worried that the noise will disturb the nuns in their prayers and that the work could encroach on the church’s property. Though the convent is located 130 meters away from the planned worksite, the church was not notified of the plan and only found out about it days prior, the letter said. Gorny Convent, known today for its golden onion domes, was built in the 19th century, but its church has remained unfinished for a century. It was finally completed in recent years with funding from the Russian government, as part of the renewed operations of the Russian church in Israel. The religious Russian delegation is controlled by the primate of the Russian Orthodox Church, known as the Patriarch of Moscow and all Russia, who has a close relationship with the Kremlin. Putin himself has been involved for a long time with the church’s activities in Israel. He advanced the return of the Mission of Saint Sergius or Guest House of Saint Sergius, known in Israel as Sergei Courtyard, to Russian control. The area, controlled by the Soviet government until the 1967 Arab–Israeli War and the severance of Israeli-Soviet relations, was returned to Russian control in 2009. The Israeli Ministry of Agriculture, housed in the area for years, was evacuated within a single day in 2011 as part of the conditions Putin set for prime minister Benjamin Netanyahu ahead of his visit to Moscow in March that year. The compound was transferred to full Russian control in 2012 despite objections from many organizations in Israel. The Russian opposition to the light rail construction plan is the latest in a series of diplomatic clashes between Russia and Israel. In April, Naama Issachar, an Israeli-American backpacker, was arrested during a layover in Moscow after nine grams of marijuana were found in her bag. She received a seven-year sentence. Issachar’s arrest and hasty and severe sentencing prompted wide criticism in Israel. The amount of drugs Issachar carried is considered legal for personal use in Israel. While the laws concerning marihuana are different in Russia, such a small amount would usually result in a much more lenient sentence. Many in Israel believe that the arrest was intended to pressure Israel not to extradite Russian national Aleksey Burkov to the U.S. on embezzlement charges. The Russian government has denied any connection between the cases. Since the beginning of December, around 30 Israelis, among them prominent businessmen, were denied entrance to Russia on claims of incorrect visas. Last week, on the night between Sunday and Monday, eight high-ranking Israeli businessmen, among them representatives of Google and Apple Israel, were detained in Moscow airport, interrogated for 12 hours, and then refused entry to the country despite having visited multiple times before. On Wednesday, some 50 Israeli tourists, including children, were detained at Moscow airport for up to 12 hours, interrogated and finger-printed, before being allowed to enter the country. Israeli media has speculated that the actions are intended to put pressure on Israel to ease up on entry requirements for Russian tourists.