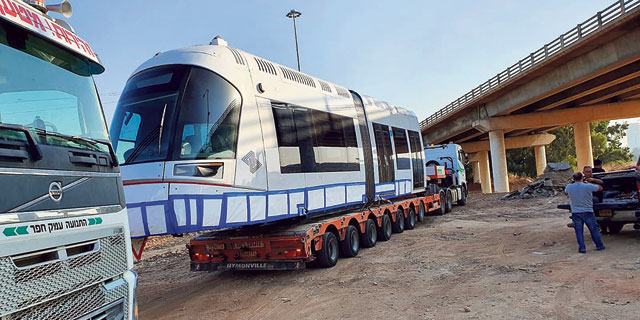 Potential problems include the possibility of uncontrolled speeding, derailment, wrong braking orders, malfunction of the fire detection system, doors opening during travel, or not opening during an emergency

Myriad flaws were detected in the new, Chinese-made light railway cars headed to Israel. A safety audit report by Changchun Railway Vehicles Co. Ltd. (CRC), the Chinese company that won a tender to manufacture Israel’s light rail cars for the planned route between Tel Aviv, Bat Yam, and Petah Tikva, revealed serious potential malfunctions. Israel ordered 90 cars, five of which have already arrived for tests, while the rest are set to be supplied by the end of 2020, ahead of the planned launch of the line in 2021. The report was commissioned by Israeli government agency Metropolitan Mass Transit System Ltd. (NTA). In its review, NTA stated that the findings are not expected to push back the schedule, and no extra charges are expected as CRC will be required to correct the failings. According to the report, reviewed recently by Calcalist, potential problems with the cars include the possibility of uncontrolled speeding; the movement of the cars during passenger disembarkation; wrong braking orders; doors opening during travel; malfunction of the fire detection system; and malfunction of the door opening mechanism during an emergency.

A deeper look at the report revealed that the Chinese manufacturer proposed solutions for some of the problems. Some were considered acceptable by NTA, while others were termed inadmissible. Regarding the possibility of the train going off the track, CRC stated that the derailed cars could be stopped by the tunnels’ “defensive walls.” For uncontrolled speeding that could lead to impact with vehicles or pedestrians, CRC suggests the use of emergency breaks—or that drivers honk to warn pedestrians. Other concerns are that the air conditioning will fail during an emergency (CRC’s solution: passengers could force doors open or break a window), or problems with the communication system (passengers can use a mobile phone, or pull the emergency brake lever). NTA executives, speaking to Calcalist on condition of anonymity, emphasized that the audit was performed on NTA’s behalf and that CRC is expected to fix all problems to NTA’s satisfaction. The problems NTA has encountered are not unique to Israel and CRC. In Boston, for example, the Massachusetts Bay Transportation Authority recently pulled cars manufactured by Chinese Railway Rolling Stock Corp. from the orange line, after they experienced derailment, door issues, and “uncommon noise.”  When CRC won the tender four years ago, some eyebrows were raised when it was revealed that the Chinese manufacturer was chosen for submitting the lowest bid, NIS 1.27 billion, compared to the competing company, Spanish CAF, which asked for NIS 1.36 billion. A report on the tender process ordered due to the criticism concluded that the structure of the tender placed a low enough priority on quality that it created beyond acceptable risk. The report was later shelved.

Approached for comment, a spokesperson for NTA said that all aspects of the light railway are subject to international exacting standards of quality, which are enforced by a third party, global consultancy company WSP Global Inc. NTA added that all elements of the project will have to meet before the service opens to the public. The use of data taken from risk analysis activities before the process is completed in an attempt to create a sensational headline is irresponsible, incorrect, and inaccurate, the spokesperson added.