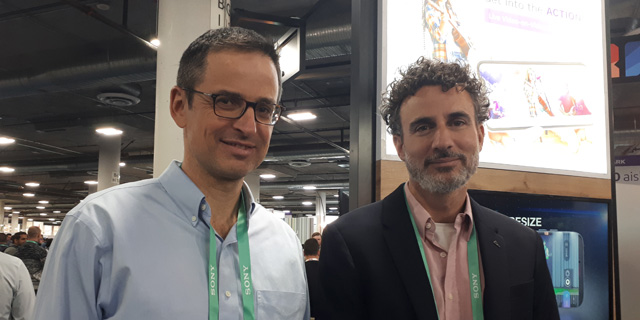 Israel-based Spectalix develops technology that can identify people or objects on a mobile phone-recorded video, separate them from the original background, and add them over a new video

Israel-based Spectalix Ltd. develops technology that can identify people or objects on a mobile phone-recorded video, separate them from the original background, and add them over a new video background. “To describe it in one sentence, we take the green screen effect and make it accessible on mobile to anyone, in real-time,” co-founder and vice president of business development Koby Maluk told Calcalist last week during the 2020 Consumer Electronics Show (CES) in Las Vegas. Founded in 2017 and based in northern Israeli tech hub Yokneam, Spectalix employs a permanent team of six and another 30 people outside of Israel who perform annotation for the product. The company raised $1.2 million to date, according to co-founder and CEO Mordechai Cohn.

Spectalix’s technology utilizes a neural network to identify the contour of the targeted object in the video frame by frame, cut it out, and paste the resulting video on top of another video at 30 frames per second. The technology is in very advanced stages of development, Maluk said. It is already viable for some types of devices, while for several devices the company still needs to adjust the technology, a matter of a few months. According to Maluk, the company is looking to create a cross-platform application that will target private users as well as brands such as sports groups and leagues and creative agencies. The app will contain backgrounds created by Spectalix as well as by users, but the main way the company intends to monetize the technology is by partnering with brands. Spectalix could provide a software development kit (SDK) for brands that have their own app, and companies with no apps of their own, like beverage or food companies, could be hosted on Spectalix’s app, Maluk said. “Sports groups, for example, have many games a year, and a social division,” he explained. “If before every important game they’ll create a scene with the star players where fans could insert themselves, we believe a lot of people will be interested.”