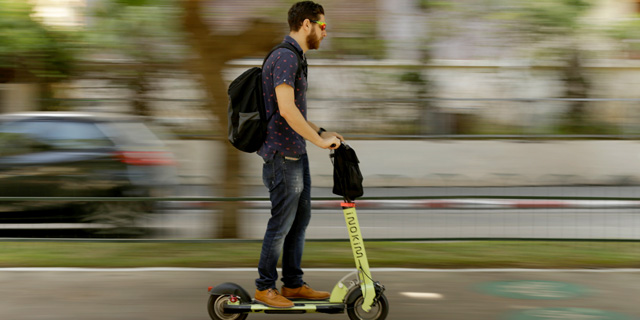 Over 10% of Israelis Make Weekly Use of Bikes and E-Scooters, Report Says

Nearly 7.5% of Israelis use micro-mobility options every day, according to a global public transport report released Wednesday by Israel-based public transportation app Moovit

Approximately 12% of Israelis use bikes, electric bicycles, and electric scooters on a weekly basis, according to a global public transport report released by Israel-based public transportation app Moovit App Global Ltd. Wednesday. Around 7.5% of Israelis use micro-mobility options every day. Tel Aviv is often considered an ideal market for micro-mobility vehicles thanks to its warm climate and mostly flat terrain. In 2019, Tel Aviv had the highest rate of shared e-scooter users per capita, according to a Thursday report by Israeli news outlet Ynet that cited Brad Bao, the CEO of smart mobility company Lime.

Bangkok had the highest percentage of micro-mobility users in the world on a daily basis, nearly 30% of the population according to the report, followed by the Mexican cities of San Luis Potosi and Monterrey, where 24% and 21% of the respective population uses bikes, e-bicycles, and e-scooters every day. The average distance a person travels during a commute in Israel is 19.6 kilometers, the second-longest distance among the 24 countries Moovit surveyed. The top spot went to The United Arab Emirati cities of Abu Dhabi and Dubai, which boast an average trip distance of 20.88 kilometers. In terms of the average commute time to and from work, Israelis spend longer in transit than most international counterparts. The average commute time in Israel, according to Moovit, is 52 minutes in each direction. The city with the highest average commute time, however, 72 minutes, is Istanbul, and the lowest commute time, 20 minutes, was recorded in Burgos, Spain. The average wait time in Israel for transit during a commute is 14.2 minutes, with 46% of public transportation users making two transfers during their commute to work, and 18% making three or more. Founded in 2012 and based in central Israel, Moovit develops a free mobile navigation app that offers real-time public transit information in 3,000 cities spanning 92 countries.