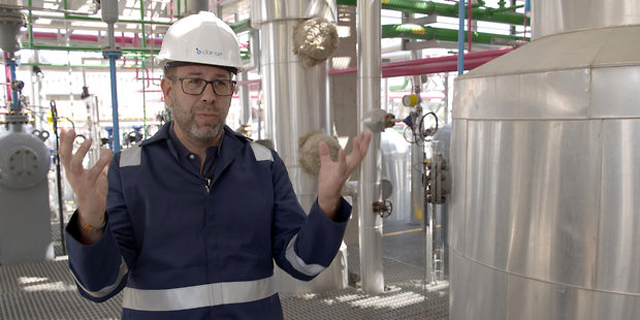 Ran Sharon, 49, is the founder and CEO of cleantech company Clariter that promises to take a variety of plastic waste items and turn them into non-toxic, odor-free industrial oil, wax, and solvents that can be used as raw material for various products

Plastic products are piling up worldwide, filling up not just landfills but oceans and natural landscapes and threatening to drown the earth in non-compostable, mostly single-use garbage. That much we know. But, quietly, over the past 16 years, Israeli entrepreneur Ran Sharon has been working on a possible solution. In 2004, Sharon founded Clariter Societè Anonyme, a cleantech company that promises to take a variety of plastic waste items and turn them into non-toxic, odor-free industrial oil, wax, and solvents that can be used as raw material for various products. 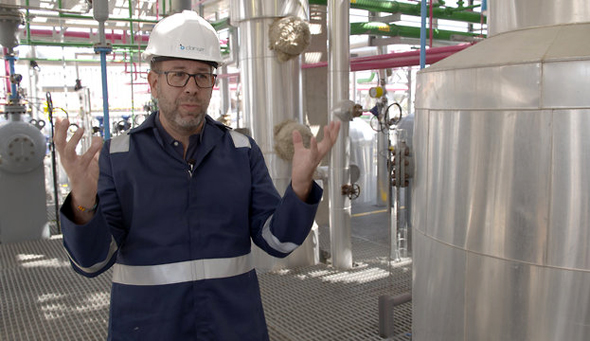 While he emphasizes that he is a businessman, not a tree hugger, 49-year old Sharon, who acts as the company’s CEO, said he believes the world’s plastic problem must be addressed before it is too late. “With the current rate of population growth and the ever-expanding comfort-first lifestyle, the pile of plastic waste will only grow,” he said in a recent interview with Calcalist. Clariter was born when Sharon was at a crossroads. He had just stepped down as the head of a Warsaw tech hub and was not sure about his next step. Then, he met 84-year-old chemistry Professor Andrzej Bylicki, who told him about the process he was developing for turning plastic into useful material, which later became the basis for Clariter’s technology. Sharon set up a pilot in Poland and reached proof-of-concept within two years. “It gave us a chance to make a lot of mistakes and improve our product,” Sharon said. “We were checking to see what happens when we use Coca-Cola bottles, plastic bags, and all kinds of plastic products to see how well the process works on them.” According to Sharon, Clariter can process most plastic products, including bottle caps and sturdy toiletry containers that are normally unrecyclable, but that it cannot deal with drinking bottles, which he says only amount to between 8%-10% of plastic waste. There are several methods of recycling plastics—either by deconstructing its molecular structure to make new forms of plastics or by turning it into a source of energy, a process that releases a large amount of pollutants, Sharon said. What Clariter does, according to Sharon, is not recycling, which means making the same thing again, but upcycling, turning useless and harmful plastic waste into necessary and clean raw material. “Our oil is as clear as water, has no smell, no sulfur, no toxins of any kind,” he said. As an example of possible uses, Sharon gives the paint industry. “Most paints smell like petrol but our material is odorless,” he said. Clariter’s product can be used to manufacture a variety of consumer products including detergents, coating for wooden floors, shoe polish, and candles. The company hopes to gain a U.S. Food and Drug Administration (FDA) approval that will allow it to be used in body care products, such as moisturizing lotions and baby oil. After completing its pilot, Clariter set up a large manufacturing and development facility in South Africa. The plant has been operational since 2018 and is meant mainly to serve as a template for future facilities worldwide and give suppliers and clients a chance to examine the technology’s potential for their business, Sharon said. The relatively small factory— capable of producing just 1,000 tonnes of product a year—is not profitable and was not meant to be, as the main goal is still advancing development, he said.

The company’s next factory will provide 60,000 tonnes a year, allowing it to turn a profit, he added.

In five years, Clariter intends to open five new factories and also plans to license its technology for use by other companies, allowing for accelerated growth. With this scenario, by the end of 2028, Clariter intends to produce 1 million tonnes of its a year. "We have an agreement with a major Dutch company that is willing to take all the product we make off of our hands, but we only signed for 30% because I want to export and sell to other customers,” Sharon said. Clariter employs 70 people in Israel, Poland, and South Africa and has raised over 35 million euros to date. It is currently working to raise an additional sum of between 15 million euros and 20 million euros in the near future, Sharon said. In the long run, it intends to raise an additional round of 100 million euros, he added.

According to Sharon, Clariter’s factories can be set up in urban environments as they produce very few emissions and a test conducted by a Dutch company determined its process was far less environmentally damaging than current plastic disposal methods such as landfill dumping or burning.

“If I could, I would set up 10 factories in Israel and take care of all of the country’s plastic waste, but you have to be realistic and start small,” Sharon said. This requires a shift in everyone’s state of mind—from garbage disposal professionals to regulators—we need to stop complaining and start figuring out how to do better, he said.