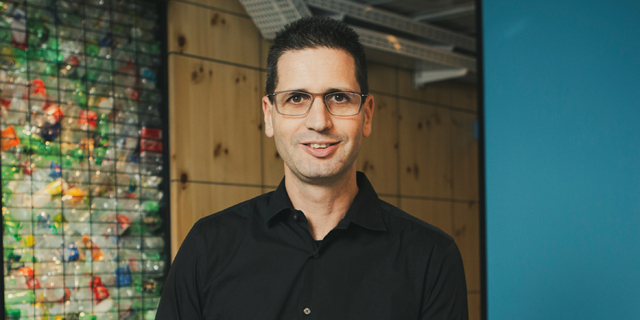 It's 2020, and SodaStream Is Taking on America

On Sunday, the Kansas City Chiefs won the 2020 Super Bowl. Before halftime, at-home water carbonation company SodaStream International Ltd. broadcasted its first Super Bowl commercial since 2014. But those expecting the company’s notoriously feisty ads—in 2013, CBS refused to air a SodaStream commercial that bashed then-rivals PepsiCo and Coca-Cola, and a 2014 ad featuring Scarlett Johansson was only slightly more tame—were destined for disappointment. The SodaStream of 2020 is another beast; one fully owned by PepsiCo, and no longer led by legendary CEO Daniel Birnbaum. “The new ad is less biting than its predecessors, we need to be more level-headed today,” CEO Eyal Shohat told Calcalist in his first interview since assuming the role in July. The new commercial, which shows astronauts discovering water on Mars and stars Bill Nye, was devised at SodaStream’s Israeli headquarters and is intended to mark the start of a new era for the fizzy water maker.

“SodaStream became known in the U.S. as a colorful drink, and that is a big mistake in terms of marketing, because the entire U.S. market is moving away from soft drinks and diet drinks towards sparkly water,” Shohat said, adding that the company’s earlier efforts to build its image have become counterproductive. Shohat is planning a rebranding of SodaStream in the U.S., promoting it first and foremost as a device that makes carbonated water. As part of its rebranding and its integration within PepsiCo, which paid $3.2 billion for the Israeli company last year, SodaStream will start selling subtle-tasting syrups in July under PepsiCo’s brand Bubly. Later on, SodaStream will also start selling syrups in classic PepsiCo flavors. But that is the extent of the markers of SodaStream’s new ownership, at least for the moment. A tour of SodaStream’s facility in Rahat, a Bedouin town in southern Israel, concludes without sighting even one PepsiCo logo. There was no great change, Shohat said. “PepsiCo CEO Ramon Laguarta said it explicitly when he visited the facility over the summer: we bought SodaStream for what it is, not to change it or to synergize and cut costs.” There is no merger plan or merger actions, Shohat said, but PepsiCo is helping SodaStream break into the American market. “Ramon has senior executives at chains like Walmart or Target on his speed dial, and that’s the difference. We’ve already been added to Albertsons, the third largest U.S retailer.” There was one incident, though, that, for all his talk, made Shohat feel like a cog in the PepsiCo system. It was when he called management to inform them that Birnbaum, SodaStream’s legendary leader and the architect of the PepsiCo acquisition, was being investigated under suspicion of providing an acquaintance with insider trading information around the completion of deal. Birnbaum, now the company’s chairman, was released under limiting conditions. Among the suspicions against him in the still-ongoing investigation are allegations of fraud and breach of trust. While the timing is suspicious—Shohat assumed the role of CEO in July 2019 and the investigation became public in September—he says there is no connection between the two events. “When I was appointed as CEO, it was clear Daniel would be taking many steps back. He holds the title of chairman, but at a private company that has less operative significance. Shohat was the one who informed PepsiCo about the investigation as soon as he was able to, considering the limitations that the Israel Securities Authority placed on him. “Jim was of course very surprised, and not really happy about it, but it was all in very early stages at the time.” Jim is Jim Andrew, executive vice president of SodaStream and PepsiCo’s Beyond the Bottle Ventures, who is part of a very small group of people that report directly to Laguarta. “I was the CEO for about a month then, and Jim and I have a great relationship, we talk once a week.” Shohat also had to break the news that he himself was summoned to give testimony. Recounting that episode, he laughingly stated it was the most downtime he got in the past six months, because he was not allowed to bring his phone in the room. Birnbaum’s investigation is a non-issue at the company, Shohat said. “I emailed all employees, described the situation, explained that it had nothing to do with the company’s operations and that I hope it all turns out to be a mistake. No one at Pepsi told me to send the email. They asked if they should send someone to Israel and I said there was no reason, and that was it.” These days, Shohat is attempting to leave Birnbaum’s legal issues behind him and focus on SodaStream’s next big move: expanding the Rahat facility with an investment of NIS 400 million (approximately $116 million), accompanied by recruitment efforts of 500-700 additional employees. SodaStream currently employs 2,500 people in Israel. The plan was in motion even before the PepsiCo acquisition. “Manufacturing capacity is our biggest issue, and we’ve been chasing our tail for two years in that regard,” Shohat said. The company looked at several options, including China, Eastern Europe, and the U.S., but eventually, Israel proved the best option, financially as well, he said. “Pepsi became the second company, after Intel, to receive strategic investor status here,” he said. The status comes with a government grant worth 20% of the NIS 400 investment and another grant related to the facility’s location in Israel’s rural south. “We’ll pay 5% tax on income and the same tax on dividends,” Shohat said. “Pepsi said those terms made Israel the most attractive location in terms of investment, so I hope it is just the beginning for them.” Shohat said the Rahat facility has cut down local unemployment from 40% to 20%. As part of the acquisition agreement, PepsiCo committed to keeping the facility, in its current framework, for at least 15 years. SodaStream’s headquarters, which employs 200 people, are located in Kfar Saba, a town in central Israel. Even though SodaStream stopped releasing its financial reports since the acquisition, according to Shohat, the company recorded revenues of around $900 million in 2019. That means two things: first, SodaStream is maintaining the growth rate it had before the acquisition, of around 15%. The second, and more important effect, is that SodaStream is set to become PepsiCo’s 23rd brand in 2020, an honor reserved only for businesses that have sales of over $1 billion a year. In an empire that employs 265,000 people across 190 countries, the achievement will give SodaStream a different status.

After the Rahat expansion, SodaStream is planning a battle for the American market. Despite the buzz it has generated to date—and the $5 million it previously spent each year on less than a minute of Super Bowl airtime—the company’s products can currently be found in only 1.5% of U.S. households, and the U.S. market only contributes 15% of the company’s sales. While that is almost 2 million households, Shohat believes the potential is much greater. Currently, Germany and Sweden are SodaStream’s biggest markets, with Germany being the largest global consumer of carbonated water. “If we can increase our U.S. penetration to 5%, which I hope will happen within three years, it means an additional $1 billion in sales.” Since taking on the role of CEO, Shohat has replaced the company’s American management team and hopes the big break will occur in 2020. In the longer term, if we can reach a 15% share of each market, that means many more billions.”