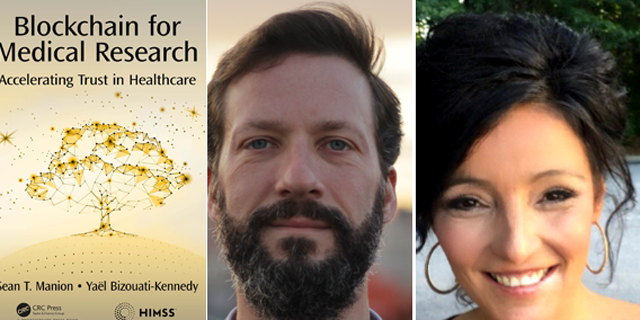 In a new book, authors Sean T. Manion and Yaël Bizouati-Kennedy discuss how distributed ledger technology can accelerate medical research while bringing a new layer of trust to healthcare, especially in the wake of the coronavirus crisis

The promise of blockchain technology has seemingly been scrutinized from every angle since the pseudonymous Satoshi Nakamoto published Bitcoin's white paper and introduced the world to its underlying tech more than 10 years ago.

Its potential is especially apparent in the field of medical research. According to Sean T. Manion and Yaël Bizouati-Kennedy, the authors of the new book "Blockchain for Medical Research: Accelerating Trust in Healthcare", it takes 17 years on average to bring new medical treatment ideas into evidence-based clinical practice. Manion and Bizouati-Kennedy believe blockchain can improve science and accelerate medical research while bringing a new layer of trust to healthcare.

A blockchain is basically a database that is shared across a network of computers. The network constantly checks to ensure all the copies of the database are identical, making the records immutable. Blockchain is already being used in the healthcare industry for different purposes, with the ultimate goal being to manage trial data and medical records while maintaining personal privacy and regulatory compliance. One such example is the Drug Supply Chain Security Act (DSCSA), a pilot for which was completed in December 2019, by international accounting firm KPMG LLP, German pharmaceutical and technology company Merck KGaA, Walmart, and IBM, as part of a U.S. Food and Drug Administration (FDA) project. "The pilot’s findings demonstrate that leveraging blockchain technology can significantly reduce the time needed to trace a prescription drug—from up to 16 weeks to two seconds," IBM said in a press release at the time. Manion, the chief scientific officer at ConsenSys Health, the healthcare arm of Brooklyn-based blockchain technology company ConsenSys Inc., and Bizouati-Kennedy, a freelance journalist and author, began writing the book last year before the coronavirus (Covid-19) pandemic rocked the world, not only changing almost every facet of the way people live their lives but also sending tsunami-like shock waves through the medical community. "When you hit a situation as globally dire as the one we are in where things change so drastically, so quickly, everyone is saying why did not we have something in place to do things faster especially when it comes to medical research," Manion said in an interview with Calcalist earlier this week. "The process of clinical research is very slow and methodical and it has to be in some cases, but it is also bogged down by bureaucratic, as well as human issues." Bizouati-Kennedy said that a tragic personal loss was her source of inspiration for writing the book. "First, I believe in blockchain and what it can achieve, especially as it relates to medical research,” she told Calcalist. “I also wanted to spread this important message and show, via all the interviews I conducted for the book, that people from various backgrounds are putting enormous efforts in creating real-life solutions. On a personal note, I lost my son to an illness, and treatment was not developed fast enough to save him, I hope this will change soon. This was my biggest motivation," she said.

The book includes three main parts. In the first part, Blockchain Isn’t Tech, the authors look at blockchain along with critical trade-offs and current explorations of its utility. The second part, ‘Science Is Easy’, takes a closer look at science as a process and how this drives advancement in medicine. In this part, the authors outline how the open science movement is looking to improve the current medical process, while highlighting the limitations of these improvements using current technology. The third part, DAO of Science, examines how blockchain, applied to open science, can impact medical research, for example with decentralized autonomous organizations (DAO). DAOs are organizations represented by transparent computer encoded rules not influenced by a central government. Manion explained the book is meant to first and foremost educate readers in an effort to bridge the gap between tech and medical research. The book ends, however with a template for a strategic plan for how governments in particular, and funding agencies in general, may want to look at blockchain tech. "We look at how they may want to foster education and the piloting of it, as well as some of the regulatory challenges that come into play. Really it is a step by step plan, that I initially thought was for the next three to five years, but with the current crisis it could be accelerated to the next year or two. To quickly get the type of framework that blockchain could bring into the bulk of our medical research to really accelerate new ideas into clinical practice," Manion said.