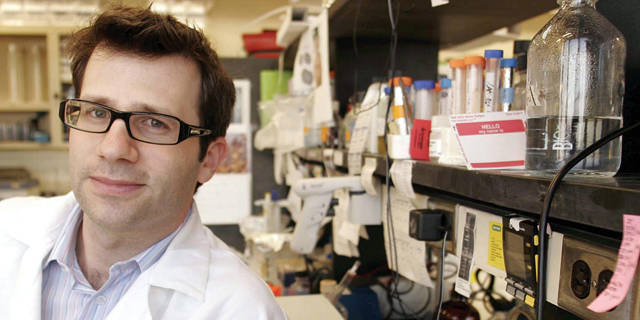 Medical physician, researcher, and bestselling author Sharon Moalem talks about why women are more resilient to the virus than men, why kids make the best virus propagators and why urbanization puts everyone at risk of infection

At times, during my conversation with him, it seemed as if physician, researcher, and bestselling author Sharon Moalem sighed in relief over the coronavirus (Covid-19) outbreak. It is not that he is insensitive to or dismissive of the personal and national tragedies playing out, on the contrary—but he has long come to the realization that a major pandemic is due to hit humanity and has been preparing for it. As far as Moalem is concerned the outbreak concludes a long and hidden cycle from which he believes humanity will emerge smarter and stronger.

“The coronavirus is a reminder,” Moalem said in an interview with Calcalist, “that no matter how important and sophisticated we think we are, the greatest danger is not climate change or a planet-destroying asteroid, but one that is invisible to us.” Moalem, 46, was born in Israel, grew up in Canada and currently lives in the U.S. A world renowned physician and researcher whose studies focus on the link between medicine, genetics, and evolution, Moalem knows a thing or two about those things that evade our sight. He earned his reputation due to his innovative approach that looks at evolution as an active process in which genetic processes react to shifting conditions. He has published four best-selling books over the course of the past 13 years, books that have brought his field of study to the attention of the general public. The first of his books, Survival of the Sickest: A Medical Maverick Discovers Why We Need Disease, was translated into 30 languages and made it onto the New York Times Best Sellers list. His fifth book, which deals with the genetic superiority of women, is expected to be published shortly, coronavirus turmoil notwithstanding. In addition to his research, Moalem is also an entrepreneur, who co-founded two startups and has 25 patents registered to his name. For the past month, he and his team at the prestigious Mount Sinai Medical Center in New York have been compiling data from around the world to build a better model of the new pandemic’s projected impact. Did you ever imagine that we would find ourselves in this type of situation? “Absolutely. Moreover I fail to understand how we did not find ourselves in it sooner. Think about it, never before have there been such conditions of proximity. Human society is more urbanized than ever before. In an urban society people are in direct contact with each other on a constant basis, every time they press a button on an elevator. The fact that we have gone 100 years without a pandemic, speaks to the resilience of our immune systems.” Trees in the forest are also in close proximity and that does not expedite the spread of diseases among them “Trees in a forest do not constitute a monoculture. In agriculture, when you are dealing with one variety of wheat or grapes, when a fungus attacks, it attacks everything. That is why farmers are forced to constantly use fungicide. If they were growing a variety of plant types, they would not have to, since the fungus would not transfer from a grape vine to an olive tree. In a natural forest, one never sees a single variety of pine trees. That only happens when humans plant it that way, like you see in Israel and other places, and that is precisely the conditions in which a disease can wipe out an entire forest, just like a pandemic breaking out in an urban setting.”

Are pandemics an urban problem?

“Throughout history, global pandemics took place when human beings crowded into cities. This is not a new problem, it is one that has been with us for 2,000 years. The Plague of Justinian, for example, took place roughly 1,500 years ago during a relatively urban period. It led many people to leave the cities to which they only returned in significant numbers after the industrial revolution.

“When Smallpox or the Bubonic Plague struck London, everyone fled the city, just as they are doing now. I am in Manhattan and everyone who could, left the city for the Hamptons or wherever they could get to. It is a pattern that repeats itself throughout history.” Does this mean that in order to avoid pandemics we must reduce urbanization? “Precisely. Less urbanization will enable a more sustainable future. We are used to thinking the other way around, that urbanization will lead to better resource management. That may be true, but the cost is more susceptibility to infectious diseases.” Reducing urbanization is not really possible in the 21st Century, though. “It is impossible as long as we keep thinking the way we have until now. We have yet to try other solutions, like floating cities. We still have not thought of different places and other ways of living.” The coronavirus mostly harms the elderly. Some even spoke in favor of tolerating such harm. Could this be a message from nature that there are simply too many people and that it is time to make way for the next generation? “Actually we are discovering that the virus is deadly across more age ranges than we initially thought. We are seeing surprising findings regarding 30-50 year-olds. But the virus just wants to survive. It will not kill too many, so as not to inadvertently kill itself.” How can such a primitive virus know not to kill too many people? “The people who are transferring the virus most these days are children and the virus knows how to take advantage of them. On the one hand, children’s immune systems are underdeveloped and their immaturity protects them from a deadly phenomenon called Cytokine release syndrome, in which the body produces too many white blood cells. On the other hand, children are in more direct contact with each other, they play and touch and thus serve as a perfect vessel for the transference of the virus to their family members. It is an amazing strategy by the virus: children’s immune systems enable widespread infection, while at the same time not affecting them too violently. Another advantage is that children have many more years to live, so the virus has found itself long-term living arrangements.” Will traces of the virus remain with us forever? “The chances of that are pretty high. Any disease that attacks us can change our genetics and, in a way, affect evolution. Pandemics influence evolution in two ways. One way is by killing off many people. Those who managed to survive due to a genetic advantage pass it to their offspring. The other way is by actually altering our genetic code. Around 8% of the human genome is made up of the remnants of ancient viruses that spread, infused into human cells, and left their genetic payload within them. “There are reports of men who contracted coronavirus and concentrations of it were discovered in their testicles, which means it could reach their offspring. It is possible that the changes to our genetic code are a type of correction that will grant us previously unseen traits, but we will only find out about them in the distant future. When that happens we may be able to understand why some people got sick while others did not. It may be the case that some of the people who died from the virus, particularly the younger ones, had an immune system that was good at coping with germs, but overreacted when it encountered the virus.” Is there a difference in how male and female bodies respond to diseases? “More men contract Covid-19 than women. People do not understand the differences between the sexes and immediately say it is a result of behavior, that men smoke more or wash their hands less often. This may be partially true, but the fundamental reason is that women have a stronger immune system than men. It is an evolutionary trait, with the goal being that women survive to care for the children.”

An important part of your work focuses on epigenetics, the ways in which the genetic code changes in response to different conditions. Will the events taking place now produce trauma that will leave a mark on the human genome? “It is difficult to characterize it as trauma. What is taking place now is not much different from what humanity has been coping with for thousands of years, up until the invention of modern medicine and hygiene. We were lucky to experience a century without a global pandemic. “When it comes to epigenetics, any crisis can have an impact, but it can only be seen in the long run. We know, for example, that the children of Holocaust survivors have a tendency for obecity because their parents’ bodies suffered from malnutrition and, as a result, stored more nutrients and that trait was transferred to the next generation. So the result of this outbreak may be the birth of many hypochondriacs, which is not necessarily a bad thing. Why are people afraid of snakes even though only a small minority of us ever encountered them in nature? Because that ancient fear is genetically ingrained in us. Maybe the coronavirus pandemic will be an efficient way of instilling fear of microbes, so we are more careful about what we touch and wash our hands more often.” The U.S. currently has highest number of patients and the rate of infection there is frightening. As someone who is very familiar with the health system there, do you think it is up for the challenge? “It all depends on people’s willingness to self-isolate, but the chances of people locking themselves up are pretty slim. In a country that is home to 300 million people it could easily end with millions of deaths, but I remain an optimist.” Covid-19 Coronavirus “Sharon Moalem” Evolution Genetics Interview