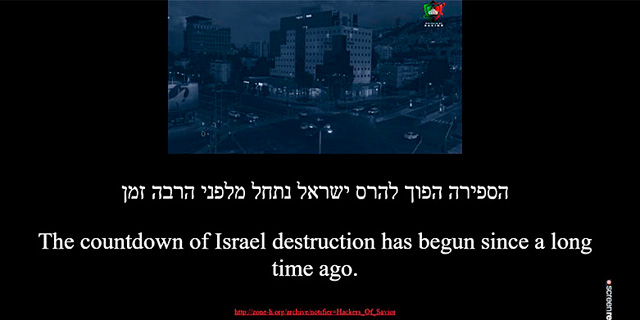 Thousands of Israeli Websites Down after suspected Massive Iranian Cyberattack

The cyber war between Israel and Iran is heating up. Tens of thousands of mostly unsecured Israeli websites were reportedly attacked by Iran-based hackers on Thursday morning, disabling the sites and replacing them with the threatening message. “The countdown of Israel destruction has begun since a long time ago,” (sic) reads the warning message in Hebrew and English posted by a group calling itself the “Hackers of Saviour.”

The U.S. Demands Israel Takes its Side in the New Cold War with China

The sentence is also accompanied by images of what appears to be the destroyed city of Tel Aviv, links to YouTube videos, and other threatening phrases.

The group’s YouTube channel describes them as hackers set on avenging Israel’s treatment of Palestinians.

When opening a link to a page featuring the message, a notification pops up asking users to activate their cameras. Doing so is strongly discouraged.

The Israel National Cyber Bureau, the government agency tasked with protecting Israel from hacking attacks confirmed that “a host of Israeli websites were hacked in the morning hours in a suspected Iranian cyber-attack.”

“The matter is being handled by the Bureau. We recommend users refrain from pressing any links on compromised sites,” the Bureau said.

The affected websites all seem to be sites that operate on servers belonging to Upress. Ynet News received the following statement from the company: “Early this morning we detected a widespread cyber attack against many websites stored on our servers. It is a case of a malicious and far-ranging attack carried out by anti-Israel (Iranian) sources. We detected a weakness in a WordPress add on that enabled the hack and are working closely with the National Cyber Bureau to research the breach and fix the affected sites.”

Among the hacked websites are some belonging to local municipalities, popular restaurant chains, several NGOs, and a left-wing Member of parliament.

Thursday’s attack comes after a series of tit-for-tat cyber attacks between the two countries, with Iranian hackers linked to an attempted cyberattack on the official Israeli water network in April and Israel blamed for a reciprocal attack on computers at Iran's Shahid Rajaee port that caused massive backups on waterways and roads leading to the facility.