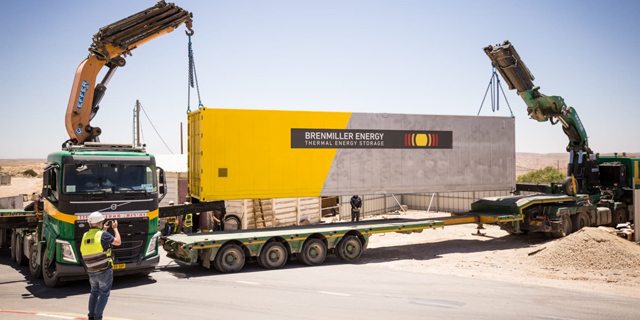 The heat recovery from the existing generators allows hot water to be supplied without the burning of additional fuels. It saves about 36,000 liters of diesel fuel per year, and reduces pollutant emissions of about 112 tons of carbon dioxide a year

Israel’s Ministry of Defense and the Israel Innovation Authority (IIA) have announced they will pilot a new water heating system that will reduce pollutant emissions at Israeli army outposts. The heating system was developed and manufactured by Tel Aviv-listed Brenmiller Energy Ltd., and was recently installed at the Israeli military’s post on Har Harif.

The system is recharged from the residual heat emitted by two existing diesel-powered generators used to supply the power at the base. In the process of generating electricity, the engines emit hot gases and the heat is stored in the storage medium (crushed rocks) at high temperatures. The reservoir is discharged when there is a demand for hot water at the base, for instance when the troops want to shower.

The system is proposed as a replacement for the current mechanism in which thermal water heaters are operated using pollutant fuels. The new system is unmanned and remotely monitored. The heat recovery from the existing generators allows hot water to be supplied without the burning of additional fuels. It saves about 36,000 liters of diesel fuel per year, and reduces pollutant emissions of about 112 tons of carbon dioxide a year, according to the IIA’s statement. The project, whose total development cost is estimated at NIS 1.5 million ($430,000), was set up for the Defense Ministry as a pilot with a NIS 500,000 ($142,000) grant from the Innovation Authority, which functions as the government’s investment arm. The company estimates that fuel savings will result in a three-year return on investment. "This is a great example of the importance of the Innovation Authority's introduction of support programs in collaboration with fellow government ministries. Many innovative technological developments are encountering the first customer checkpoint, and the pilot route allows examining its feasibility on an industrial scale, among relevant and significant clients such as the defense system. Leveraging the pilot for broad commercialization of technology while reducing financial risk due to PA support, the partner pilot site (in this case, the IDF and the Ministry of Defense) earns advanced technology in its service that saves a great deal of money, the economy benefits from a successful Israeli company that employs working hands in high productivity and civilian jobs. The state benefits from reducing the use of natural resources/pollutant emissions,” Israel Innovation Authority CEO Aharon Aharon said in a statement.