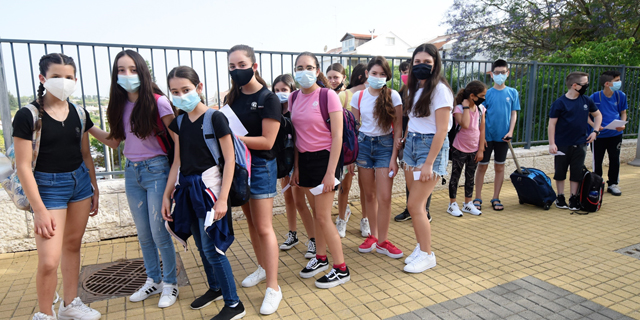 As the U.S. mulls technological tracing of students, Israel must slam the door on such proposals

Despite infections in schools increasing, Israel must resist the temptation of deepening its surveillance tactics

The return to the post-coronavirus routine in Israel’s schools, which began with a significant feeling of relief, has transformed over the last two weeks into a source of anxiety and pressure for many Israelis after it emerged that the schools were unable to enforce social distancing and mask-wearing requirements and became hotbeds of infection. Currently, 304 students and school staff members have been identified as carriers and nearly 14,000 people have been sent to quarantine after a series of infections at schools around the country. A total of 92 schools and kindergartens were closed since in-class education resumed, five of them on Friday. Even though it was a predictable occurrence — when a lockdown is lifted contractions can be expected — the ability to quickly identify and efficiently isolate the breakouts is key. People have, rightfully or not, feared a secondary outbreak due to what’s taking place in the education system in Israel and elsewhere around the world. All over the globe countries that are resuming school activities in a more gradual process, or are considering doing so, question what can be done to prevent or reduce infections in schools.

In the U.S. they are convinced that they have a solution and that it, predictably, rests in technology. In New Albany, school is only scheduled to resume in August, but before the 4,800 students return to the five schools in the district, they will be equipped with an electronic beacon that tracks their location within several meters, everywhere they go throughout the day. A central network will monitor their precise location, the people they sat next to, and the groups they mingled with. All this with the goal of limiting the spread of the disease by pinpointing the proximity points between a verified carrier and others. “We are very much interested in the automated tracking of students,” said Michael Sawyers, superintendent for New Albany-Plain Schools, adding that he believes the technology could help the school determine whether social distancing is being observed and help quickly identify students who may have been exposed if someone tests positive for the coronavirus. The schools are set to use Bluetooth beacons developed by Volan Technology, Inc, which some schools use as a safety tool and were modified to meet the Covid-19 needs. They won’t be the only educational institutions to take similar steps. Several universities in Massachusetts are considering making use of similar technology. The University of Arizona began developing an application to track its students and additional colleges are considering following suit. RightCrowd Software Pty Ltd, which sells smart Bluetooth badges to companies has developed a system that issues a warning if people get too close to each other and another that can be used for contact tracing, and they say they have been approached about them by several universities and boarding schools. Fear of the coronavirus and the ability to use technology to track its spread has given rise to the blossoming of the surveillance industry, which develops tools to track people’s behavior in the public space. Schools, which are on one hand vital to the economy’s ability to return to normal and on the other locations with high potential for infection, will be the central testing grounds for the attempt to instill such technologies. The fear is such that the American Federation of Teachers warned about it in a document presenting the plan to re-opening schools, including a recommendation to “establish rules, including contract language, that reassure faculty and students that corporate education vendors will not be using this crisis to enhance their data mining.” As far as we know, there are no such steps being taken in Israel and if there will be, they will likely be met with widespread opposition. Seeing how the academic year is already nearly over, it is difficult to see how such a move that would entail purchasing and implementing a complex network could go ahead. But Israel in the age of Covid-19 is one of the most aggressive countries when it comes to harming privacy in the name of battling the pandemic. The police here was granted dangerous capabilities in terms of receiving tracking data from cellular operators without the need for a court order and Israel is the only Western country that has allowed its espionage organizations use its powerful surveillance tools against its citizens as part of the war. If the number of infected continues to rise, the public becomes sufficiently panicked and the desire to allow the Israeli market to function normally becomes strong enough, we may see the conditions form over the summer to allow those who are interested to advance the installation of the tracing technology into the schools. After all, if it’s good enough for the Americans, why not for Israelis? The answer to such an effort must be a resounding “no.” The coronavirus will be with us for a long time, months if not years. Any change, any system that is installed to combat the disease will remain with us for a long time. It will be difficult, if not impossible to turn back the wheel once the pandemic is over. Systems that will be installed now, will not be removed once a vaccine is found, after all, it’s already been paid for and surely has other uses. The desire to return to normalcy and protect it can lead us to bow to things we normally wouldn’t, like making light of the Israel Security Agencies’ civilian tracking program or placing our children under surveillance. Instead of protecting our routine, submission to such measures will create a new routine of spying and surveillance, in which the government, its agencies, and even private companies can tell where we are at any moment and use that information for unapproved purposes. That is not a normal routine, it is a dystopian vision that we must defend against. For now, no one has suggested installing tracking devices in Israeli schools. But as the number of sick rises, and it will continue to do so, and the number of schools being closed climbs, chances increase that someone will put it on the table. The only appropriate answer to such a proposal is slamming the door in their faces.