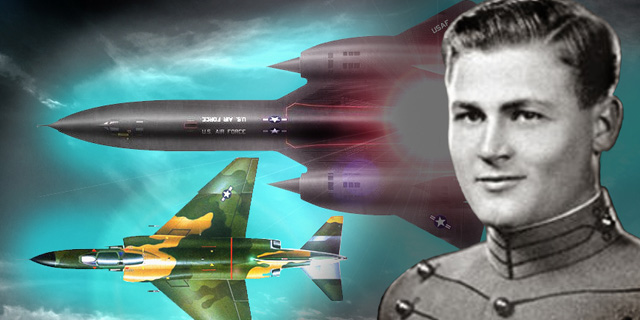 Rockets, pilots and mishaps: The story behind Murphy’s law

Murphy had developed for the U.S. Air Force arguably the most accurate tools to monitor and plan ejection and emergency systems but it was one bad day at work that made him famous

Hello, this is your captain. There is an old Yiddish saying that goes, "Man makes plans...and God laughs," and it does really seem that sometimes everything that can possibly go wrong does ultimately go wrong, as if on purpose. This is also known as "Murphy's law."

Today I'll tell you the story about that very Murphy, a pilot who became an engineer, and about that day that connected him with random misfortune for all eternity. 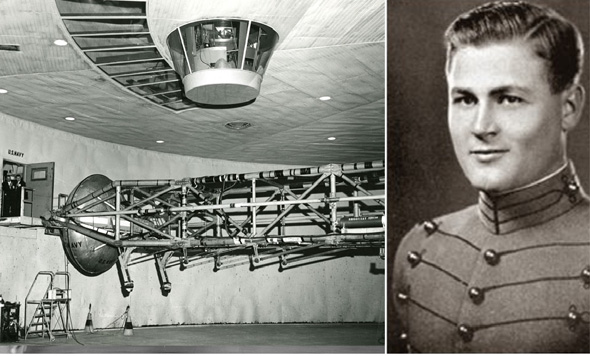 Ed Murphy could have never imagined what he'd become to be remembered for. Photo: NASA

Edward Aloysius Murphy Jr. was born in 1918 and served as a pilot in World War II. He didn't stand out during his service, but after the war he went on to study engineering and would go on to become a brilliant and creative innovator. Murphy became a R&D officer at the Wright Air Development Center of Wright-Patterson Air Force Base, helping develop emergency systems, including several innovations in the field of human centrifuges aimed at testing the reactions and tolerance of pilots and astronauts to acceleration above those experienced in the Earth's gravity, what is known as High-G training.

In 1949 he joined a very special project, the high-speed rocket sled. The project was labeled as MX981 and its goal was to test the effects of high speed on equipment (that was either too sensitive or too dangerous to use on a plane) and on humans, which was essential in the development of ejection seats for the space age and supersonic jets. Ejection seats were in use already prior to World War II, but they weren't built to withstand speeds of 1,000 km/h or 2,000 km/h. Ejecting in those speeds with the seats available at the time would essentially be the same as jumping without a parachute.

So how do you test the effects of acceleration on equipment and ejection? With a railroad track several kilometers long and a rocket sled mounted on it, of course.

The poor experimenter was the head of the research project himself, a man named John Stapp, a fearless physicist and U.S. Air Force colonel who registered breakthroughs in research on the effects of acceleration and braking on objects.

The tests were held at the Edwards Air Force base in California, initially at speeds of several hundreds of kilometers per hour and later at speeds reaching over 1,000 km/h. After the sled came to a halt, the researchers pulled Stapp out of his seat and according to his injuries determined how to improve the harnesses so that next time he might suffer more minor ailments.

Stapp ended each of these test runs with hemorrhages, fractures in his bones, bruises and more. It was said that he preferred to be his own guinea pig as experimenting with animals didn't result in accurate enough results and he didn't have the heart to send anyone else to be tortured on the rocket sled.

Very early on in the experiments, Stapp understood that the sled wasn't providing accurate data and that all the work wasn't resulting in valuable information. Rocketing equipment and people at speeds of hundreds of kilometers per hour is fun and all, but a little unnecessary, if it doesn’t provide the required results, and Stapp’s team didn't have enough information to develop a seat that would survive a supersonic ejection. He needed an expert, which is why he brought in Ed Murphy.

And he approached the right man. Murphy had developed for the U.S. Air Force arguably the most accurate tools to monitor and plan ejection and emergency systems. Among his developments was a system of 16 sensors that was attached to the harnesses and belts of the test pilots in order to provide information on their condition. Murphy's invention was originally built for centrifuge testing, but when he was approached by Stapp he was more than happy to modify it for the rocket sled. 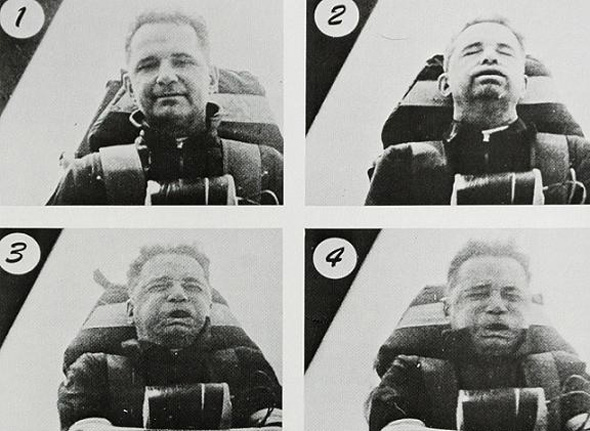 John Stapp was his own experimenter, unwilling to to put anyone else through the torture of the rocket sled. Photo: USAF

There were several last-minute changes made in the morning of the first experiment way back in December 1949. For one, rather than Stapp being strapped to the seat, it was a chimpanzee that was chosen for the mission so that the Air Force wouldn't lose a brilliant scientist in the case of an accident. However, Stapp ultimately decided to spare the chimpanzee and replaced the monkey in the hot seat.

The rockets ignited and the sled roared down the track until it gradually came to a halt. Murphy and the rest of the researchers rushed to check what the sensors recorded, only to discover that they didn't register a thing.

Murphy, a talented engineer, immediately understood that a mistake had been made. All the equipment was checked, tested, and approved several times before the experiment so there was no reason for any malfunction. To his surprise, Murphy found out that all 16 sensors weren't correctly plugged into their sockets as he had instructed his technicians. They plugged them in upside down.

Murphy was furious at one of his assistants, saying, "if that guy has any way of making a mistake, he will."

That sentence immediately became associated with Murphy. "Murphy's law" ultimately was condensed to "If it can happen, it will happen," and named for Murphy by his technicians in mockery of his perceived arrogance.

It was Anne Roe in her 1951 book 'The Making of a Scientist' that introduced 'Murphy’s law' to the rest of the world, quoting an unnamed physicist who noted that "Murphy's law or the fourth law of thermodynamics (actually there were only three last I heard) which states: 'If anything can go wrong, it will.'"

Murphy continued his brilliant career and focused on efficient techniques for testing emergency systems. He worked in some of the U.S.'s most ambitious projects, including the Apollo spacecraft, phantom jet, and apache helicopter.

But historians don't believe that Murphy's law should even carry his name. In 1908, British stage magician Nevil Maskelyne wrote that "it is an experience common to all men to find that, on any special occasion, such as the production of a magical effect for the first time in public, everything that can go wrong will go wrong."

Maskelyne was more than just an entertainer. He was also an engineer and the world's first hacker. In 1903, he hacked into Marconi's demonstration of wireless telegraphy, proving that Marconi's claims of secure and private communication were at best premature. Clearly Marconi didn't believe things would go wrong in such a way.

A version of the law was discussed even earlier in a report by Alfred Holt from an 1877 meeting of an engineering society. "It is found that anything that can go wrong at sea generally does go wrong sooner or later, so it is not to be wondered that owners prefer the safe to the scientific," he wrote.

Holt is credited with establishing the long-distance steamship that changed global transport.

There are also claims that mathematician Augustus De Morgan came up with the concept of the law, writing in 1866: "The first experiment already illustrates a truth of the theory, well confirmed by practice, what-ever can happen will happen if we make enough trials."

So what have we learned? That for over 150 years brilliant minds have been trying to use logic to explain the fact that things can go wrong for anyone at any time. Their quotes sound the same because they all suffered from the same problem: even the greatest genius is just a human and is usually also dependent on other humans.

As for Murphy, after he died in 1990, his son said that his father hated the meaning the law had taken among the general public. When someone would miss the bus and say to himself "damn, Murphy's law!", that was terrible contempt in the eyes of the engineer. To him, these things were simply the result of a lack of planning and not a meticulous plan that encountered an unexpected mishap.

Have a good flight!