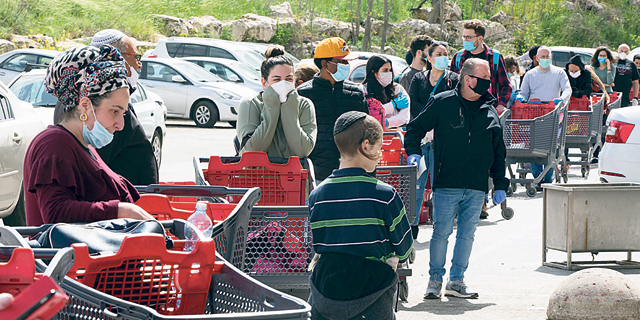 Israeli retail chains are reporting a massive jump in online sales, amid growing fears that the government will impose a new lockdown to try to curb the spread of the second wave of the coronavirus (Covid-19) outbreak and in light of the number of people who have gone into quarantine. According to chains, last week saw a 100% increase in online orders, compared to the previous week. The major supermarket chains have prepared with large inventory stockpiles and manpower, but it is estimated that a sharp rise in orders could delay supply, similarly to the delays recorded at the height of the first wave of the outbreak.

Shoppers line up outside a supermarket in March 2020. Photo: Amit Shabi

"We have been experiencing an increase in sales in the stores and online since the start of the month, but what has been happening in the past week is madness," a senior executive from one of the chains told Calcalist under condition of anonymity. "We are experiencing a 100% surge compared to last week, which as I said, was high compared to last month and certainly compared to the pre-coronavirus period." A representative of another major retail chain, who also requested to remain anonymous, echoed the sentiment. “In stores, we are experiencing a 20% increase in sales since the beginning of the month, but online sales are up by 100%.” In light of the boost in demand, the chains are preparing with increased inventories. "We have increased orders from suppliers by up to 25%, depending on the type of product," explained the CEO of one of the chains. According to him, most of the increase in inventory was recorded in dry products such as canned tuna, pasta, and flour, in line with the demands recorded during the first wave of the outbreak. "We do not expect there to be an onslaught similar to the one recorded in the first wave, because the public has realized that the food stores continued to remain open and there was no shortage of food, but caution has certainly driven an increase in the volume of shopping.” The Ministry of Health reported on Thursday morning a new daily high of 1,898 new infections and in a press conference on Wednesday evening, Israeli Prime Minister Benjamin Netanyahu admitted that another full closure could be on the cards. "We are doing everything we can to avoid a full closure, but to avoid it, we need your full cooperation, citizens of Israel," he said. "The second wave we have been discussing is already upon us. We are fighting it with determination and unity. We are taking health and economic measures. I hear (your) distress."