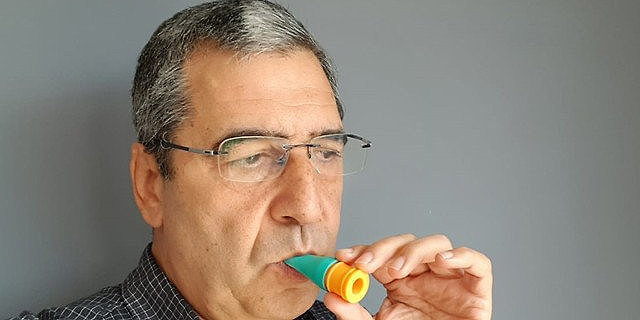 Ram Group, which claims to be the rightful owner of the invention, is suing Ben-Gurion University and professor Gabby Sarusi, who have been touting the technology in recent months

A fierce legal battle regarding an innovative device that can diagnose coronavirus (Covid-19) in one minute is currently ongoing at the Tel Aviv District Court. On the one side, a group of foreign companies named Ram Group, founded by Eyal Ram, who claims to be the rightful owner of the invention. On the other side is Ben-Gurion University of the Negev (BGU), its technology commercialization company and university professor Gabby Sarusi, who have been touting the technology in recent months.

Ram Group, represented by attorneys Eliad Shraga and Michal Guttman, filed back in June a request for an injunction against the university and Sarusi, who are being represented by attorney Eitan Eliraz. Ram Group claimed that the "defendants, who as service providers received drawings and sketches of the invention for a device that can test for coronavirus in one minute and for which there is a pending request for a patent, are promoting themselves in the media in Israel and across the world as if they developed the invention."

Ram Group claims that it has suffered massive damages due to the university's conduct. "Due to these false publications a number of investors with whom we were negotiating regarding an investment or sale decided to backtrack from their intention to invest during the funding round," read Ram Group’s filing.

BGU and Sarusi vehemently deny the accusations, claiming that the "invention is based in its entirety on what has been public knowledge for years" and that the plaintiffs haven't provided any evidence that an invention was stolen from them.

Tel Aviv District Court Judge Gershon Gontovnik didn't grant Ram Group the injunction it requested, saying that he doesn't believe there is enough evidence to approve the request. Gontovnik scheduled the next hearing in the case for August, but BGU filed an emergency motion with the court last Thursday demanding to also remove any temporary warrants that were put in place until the case resumes. BGU said that Jerusalem-based equity crowdfunding company OurCrowd Ltd. has "committed to investing $8 million as part of a funding round of $25 million in the university's technological initiative but has now announced that it will immediately halt the investment only due to the fact that the next hearing was postponed to the middle of August."

According to Sarusi, deputy head for research at the School of Electrical and Computer Engineering and a faculty member of the Electro-Optical Engineering Unit at BGU, clinical trials on the device in conjunction with the Defense Ministry on more than 120 Israelis had a better than 90% success rate compared to Polymerase Chain Reaction (PCR) tests. Current coronavirus test kits are based on amplifying and identifying the viral RNA sequences, and therefore depend on costly reagents and biochemical reactions. In addition, these PCR-based kits take hours, and in many cases days, to yield results and require logistically complicated shipping and handling of sensitive and infectious biological samples. The one-minute Covid-19 test is electro-optical in nature, rather than biochemical, it is not sensitive to environmental factors that can affect results of current testing methods and each test kit is set to cost between $50 to $100 to produce.

"These are idle proceedings. The conduct of the foreign companies is causing huge damages to the university's commercialization company and to the researcher, significantly harming the $25 million funding round for this important project," said Eitan Eliraz.

Attorneys Shraga and Guttman said: "The group owns the innovative invention that was developed to quickly and immediately identify coronavirus. Unfortunately, professor Sarusi and Ben-Gurion University are pretending to be the owners of this invention."