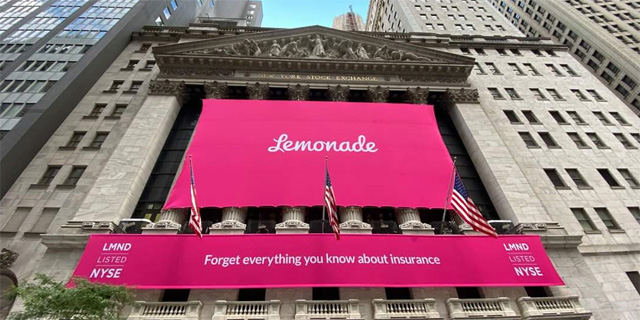 In an unusual step, analysts from Goldman Sachs, which was the underwriter for the online insurer’s successful NYSE IPO earlier this month, cut its price target by nearly 50%, urging investors to sell

On Monday, something unusual happened on Wall Street. Just one month after the successful initial public offering (IPO) of online insurer Lemonade Inc. on the New York Stock Exchange, its lead underwriter, Goldman Sachs, dropped a bombshell, initiating coverage with a recommendation to sell at a 44$ price target. This target was nearly 50% lower than Lemonade’s share price at the time. Underwriters are normally expected to take some moral responsibility for the companies whose IPOs they are signed on and continue to back them. Their name and reputation often serve as an assurance for investors that the company is indeed an attractive investment and are crucial for a company choosing underwriters.

Nonetheless, Goldman Sachs’ analysts, led by Heath Terry, wrote in a note to investors that Lemonade, founded in 2015 by Israeli entrepreneurs Daniel Schreiber and Shai Wininger, is facing five more years of operational losses before it will see any profits. "Lemonade is essentially venture investing in the public markets,” the note read. The analysts further stated they believe the company presents a higher risk profile than is represented by its current price, sending its stock down 15.6% by market close Tuesday. Lemonade is currently traded at a market capitalization of $3.6 billion. Lemonade offers insurance policies at a flat monthly rate that can be acquired instantly on its website. Underwriting and the handling of claims are also done digitally and automatically, in most cases, without human interference. It is important to note that the underwriting and analyst departments are expected to run separately, protected by a Chinese wall to prevent mutual influence. Still, investment banks normally take a completely different approach to that taken by Goldman Sachs and underwriters normally serve as a cheerleading team for the stocks they offer. Lemonade’s other underwriters, remained consistent, giving its shares a target price of $85-$105. Goldman Sachs’ analysts are no strangers to the unique nature of Lemonade, as a company set out to disrupt the insurance industry using AI. This disruptiveness was the main engine behind the success of its IPO. Yet, they wrote, its high risk is due to the challenges it faces as it “works to transition its reinsurance relationships, significantly lower its net loss ratio, and expand its product offering into more competitive categories."

Lemonade’s IPO was considered the best for an American company in 2020 so far, as its stock, first launched at $29 per share, surged by 139% on its first day on the exchange. Since then, it continued to rise, at one point reaching a price of nearly $90 per share with a market cap nearing $5 billion. The huge gap between the original valuation and the value attributed to Lemonade by the public investors has reawakened criticism concerning the working methods of Wall Street’s underwriters, who often tend to sell the shares of attractive companies on the cheap to investors they are used to working with. This means companies do not get to make the most of their IPOs, in terms of cash inflow.

Now, a month after the bank served as Lemonade’s underwriter in an IPO that brought in $320 million for the company, Goldman Sachs’ analysts say one of its future challenges will be raising additional funding.

Lemonade currently operates in the U.S., Germany, and The Netherlands. Earlier this month it announced it was entering the pet insurance market in the U.S., in addition to its home and renters insurance offerings. While its business model, based on AI tools reducing the need for human agents, allows it to save on expenses and be cheaper than its competition, it is still a long way from becoming profitable. In 2019, for example, after tripling its revenue to $67.3 million, its losses still amounted to $100 million.