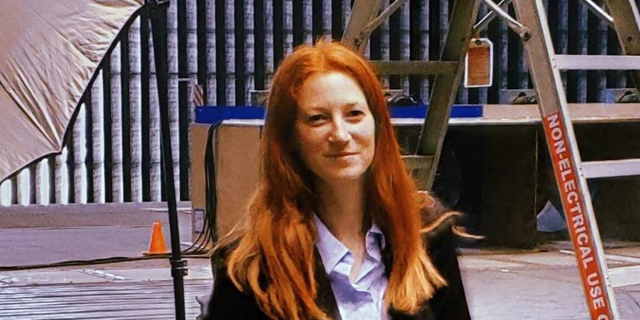 After the umpteenth time in which she entered a room to discover that once more she was the only woman in attendance, Neta Blum realized that she must act. The result, the At (Hebrew for “you,” feminine) program which encourages young girls all over Israel to pursue careers in science, technology, engineering, and mathematics (STEM) fields. Blum, and some 250 of the country's female tech leaders, including representatives from Google, Microsoft and Cybereason, visit high schools across the country explaining to young girls why a successful career in tech is open to them just as it is to the boys in their classroom, and at the same time serving as role models and living proof to their claims.

Young girls would be hard-pressed to find a more impressive role model than Blum, who at 27 has not only founded At, but also heads the Ministry of Defense’s Flight Technologies Department at the Directorate of Defense Research and Development, the first woman and youngest person ever in this position. In fact, Blum is the only female employee among the dozens working in the Flight Technologies Department. She is simultaneously carving out a career in academia as a Technion Ph.D. student in the Faculty of Aerospace Engineering.

Born here, Blum grew up in Maryland, the daughter of a professor father and doctor mother, before returning to Israel at age 17 and attending the Brakim excellence program, a joint initiative of the Technion and Israel Defense Forces (IDF) that combines a condensed bachelor’s and master’s degrees in mechanical engineering in only four years, with military service. She was the only woman in a class of 20 to begin the Brakim program, with only half of the class, including Blum, ultimately completing the arduous course.

Neta Blum, founder of the At program. Photo: Courtesy

"I was always the only woman in the class or course and had to pave the path for other women to follow in my footsteps. I understood that there is a problem if I'm always the only woman in a room and that I have a responsibility to change that," Blum, who was also named on Forbes Israel’s “30 Under 30” list earlier this year, told CTech. "So I started going to schools to talk to students about my path. And when I spoke to them about technology and things like mechanical engineering I saw a spark in their eyes and how desperate they were to learn more about these new fields. When a student comes up to me at the end of the talk to ask me how she can follow in my footsteps that means everything to me."

Blum's Ph.D. research is focused on exploring how the Saint-Venant’s principle (SVP), a tenet of structural mechanics that examines stress distribution of forces on elastic materials, works in soft biological tissues. Before joining the Ministry of Defense, Blum served in the IDF Air Force as an aircraft accident investigator.

"While I was analyzing flight accidents I understood that the human body also has failings and flaws and that led me to my Ph.D. studies at the Technion. I'm examining a theory from the world of flight related to flaws in airplanes and checking if it also applies to flaws and diseases in the human body," she explained.

Blum doesn't believe that all girls need to study sciences at a high level, but insists that they should know that they have that option to do so and shouldn't be scared about taking on the challenge, even if they will be the only female student.

"Girls don't have enough role models so as soon as they see someone who already did it and succeeded they understand that they can do so too. Women are 50% of the population but they aren't represented accordingly in senior management roles in every sector, including tech. I'm trying to change that in tech, which is close to my heart," said Blum. "The process starts from day one when baby boys are given Lego to play with and baby girls are given Barbies. It is also evident in the fact that many parents tell boys to find a way to overcome difficulties when they encounter them while girls are allowed to give up. We need to tell young girls that if they see a challenge they should go for it and shouldn't be scared to take risks the same way we would tell boys."

Blum added that when she's asked by young girls what they need to do to follow in her path she explains that besides working very hard, they should also develop additional interests, with Blum herself being very active in sports and music, also volunteering at the Synthesizer music accelerator.

"For me this is a national program," she said of At. "I try and visit as many schools as I can throughout the country. Due to Covid-19 we are now giving lectures over Zoom and that has actually allowed us to reach many more young girls. I meet with many municipalities, schools and I'm in contact with the Ministry of Education. Everyone wants to be part of this and promote this cause."

Blum's work at the Ministry of Defense is largely secret, but it was recently revealed that her department, together with the Israel Aerospace Industries (IAI), produced the country’s first 3D-printed unmanned aerial vehicle (UAV). The SkysPrinter UAV, which is electrically powered and made from 26 parts printed using metal, nylon, carbon, and complex materials, already had a successful test flight in December 2019.

"It was always important for me to be somewhere where I can have a positive impact on the world. I wake up every morning with a sense of mission and I know that what I'm doing is ultimately protecting Israeli citizens," said Blum.

Blum returned from a trip to the U.S. in March and says that gender inequality in tech is far from being just an Israeli problem.

"I was part of a delegation that toured the U.S. and I told my story across the country. I spoke about how gender inequality concerns me and asked them what the situation is like in the U.S. It turns out that they have the same problem even in ‘the great America.’ I don't think we are further behind other places in the world," Blum noted. "We need to do the right things, like having programs like At and educating girls from a young age that they can achieve anything and that they should fight and not give up. Simply show them that all the options are open to them.

“I had the benefit of growing up in an academic household with a father who is a professor and a mother who is a doctor,” added Blum. “Both my sisters also studied at the Technion, but not everyone is privileged like this. I got lucky, but what about everyone else? It is really important to me to relay the message that anything is possible to every young girl in the country who isn't as lucky."