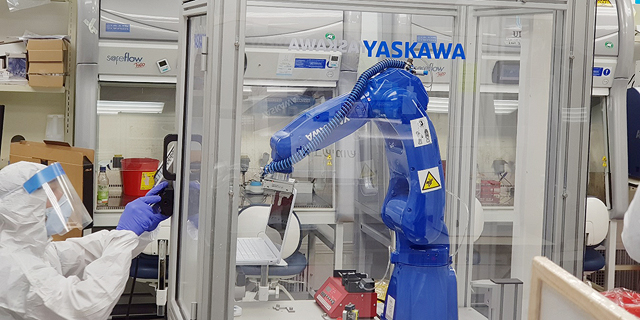 The robotic arm is capable of conducting around 2,800 tests a day and is meant to replace human testers

The R&D Center of Yaskawa Electric in Israel has completed the development of a robotic system that can conduct Covid-19 tests. Yaskawa Europe Technology (YET), which is the Israeli branch of the Japanese giant, is planning on providing labs in Israel with the robotic arm which is capable of conducting around 2,800 tests a day. The arm, which has already been installed in the IDF’s main Covid-19 testing lab, is meant to replace human testers and is built to be faster and prevent human errors. Operating the robot doesn't require any expertise and can reduce the strain currently being experienced by lab staff across the world and free them for additional tasks.

"The new corona inspection robots answer Israel’s need as well as any other country in the world, to accelerate the testing speed rate and increase them significantly," said Arik Dan, President and CEO of Yaskawa Europe Technology.

Founded in 1915, Yaskawa provides solutions in industrial robotics, motion control, inverters, positioning stages, as well as semiconductors solutions. In January 2015, the company launched in Israel a Technological Robotic and Motion Control Center, aimed to expose and simplify robotics technologies within the Israeli industry.

"YET's robotic system accelerates the testing rate significantly. This could become a turning point for the pandemic inspection management, since as the testing samples number is increased, national decisions are more easily taken and ultimately the infection chain can be stopped," added Dan. "In addition, the system will minimize the risk of lab workers who could be infected by coronavirus. The corona robot system has great global commercial potential for health organizations around the world."