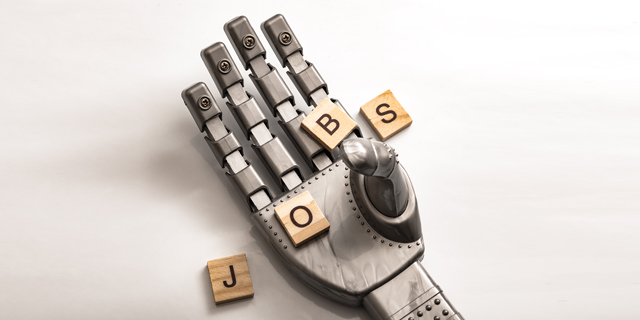 Labor Day with no labor: 10 jobs that are going extinct due to tech innovation

While technological advancements can make our lives better, it’s putting some workers at risk - let’s take a look at who might be saying goodbye to their jobs in the future

This Labor Day, the U.S. can celebrate a surprising unemployment rate of 8.4%. Of course, the ongoing coronavirus (Covid-19) pandemic has greatly impacted these numbers which once rested comfortably at the 3% mark. While the recovery looks strong (numbers were estimated to remain in the double-digits), society should still be wary of another job disruptor: technology. Innovation has amazing ways of making our lives better. We are healthier, safer, and more knowledgeable than ever before. Of course, with each advancement in our technological abilities, we run the risk of displacing some workers in the process.

When Thomas Edison created the lightbulb, a lot of candlemakers went out of business. But the world got the lightbulb. Let’s take a look at some of the jobs that have been lost due to technology, as well as some that might not survive the next 20 years. Town Criers Before our iPhones could send us tailored news to our pockets, towns used to have dedicated ‘criers’ breaking news alerts to villagers. Usually, it was young men who had the power and stamina to run around towns and scream all the latest news to whoever was nearby. The job faded into the past once radios and televisions became more widespread, and we can’t say we’re sorry about it. Switchboard operators Some older readers might remember a time when you could call an operator if you didn’t know the number of the person or company you wanted to dial. Here, the operator would literally face a physical switchboard and he/she could then plug you into the right connection. Of course, today we can all just search for the numbers we need directly from the internet on our phones - that is, if you still make voice calls. Ice Men This sounds like a superhero group - and if you lived in the 1920s, they probably were! Before the age of freezers or ice trays, it was actually quite hard to create and store ice on summer days. Ice Men would collect and distribute blocks of ice to houses that wanted to keep their drinks cold. The service was considered a luxury and was dangerous for the worker, who often suffered from blistering freezes on their hands. The Knocker-up Today, our phones can track us while we sleep and gently wake us up at the precise moment we’re in the optimal sleep pattern. So, a little different from a few years ago when ‘knocker-ups’ used to walk down streets and tap on the windows of homes with a large stick. That way, workers who needed to get to the factory at an early time would never miss their shift. It begs the question: who woke the knocker-up up? Checkout Cashiers While there are still many people who serve as checkout cashiers around the world, technology is speeding up the process whereby they might get replaced by robots. Already, consumers can use ‘self-check-out’ tills to save human interaction and error. Amazon has developed Amazon Go, an entirely cashier-less physical store based on computer vision technology. Israeli company Trax Retail is also developing technology that might make cashiers obsolete one day. Sports Umpires and Referees In a game of sport, having an unbiased mediator is paramount. Today, we’re seeing cameras and computers quickly replacing the referee on the field when it comes to decision making on the ground. The English sport of Rugby was the first to introduce a ‘camera referee’ - something a human could turn to when reviewing a move from a team player. It makes sense that one day we might see humans off the court and the game can be solely mediated by a robot with no vested interest in the results. Truck Drivers Truck driving was reported as the most popular job in 29 US states, making its eradication from the economy a worrying thought. With the advancement of self-driving vehicles, we might one day see truck fleets operate via autonomous AI technology. Shipment companies will want to replace high-maintenance humans (who require food, rest, and exercise) with autonomous vehicles that can travel for 24 hours without a minimum wage. This displacement might cause millions to lose their jobs, with American think leaders calling it the 4th industrial revolution. Radiologists As soon as artificial intelligence entered the medical imaging space, radiologists felt their jobs becoming more of a risk. And while medical imaging companies assure doctors that AI won’t replace radiologists, it’s becoming clear that radiologists with AI will replace radiologists without AI. The tool can be used alongside professionals to help them identify false flags and inaccuracies in scans - but for how long? Some in the medical sector are concerned about the future of radiologists and how human eyes can compete against terabytes of information. Uber Drivers It’s no secret that the race for autonomous vehicles is well underway. Telsa, Uber, and Google are all racing to be the first company to deliver level five autonomy for vehicles in their fleet. For companies like Uber, this means that they can finally get rid of one of the things causing them problems - their own drivers. For years, there have been reports on driver abuse, safety, and workers’ rights in certain US states. As soon as companies like Uber or Gett can automize their vehicles, it’s likely they will terminate the contracts with their drivers. Journalists(?) Deciphering fact from fiction in the world of online media has never been more important - particularly in a ‘post-truth’ world. Journalists have been key in holding power to account, informing the public, and entertaining the masses. However, it’s proving more difficult to convince readers that information is coming from an unbiased and honest source. While efforts have been made to automate the journalism process, errors are showing that the human touch is still needed - at least for now.