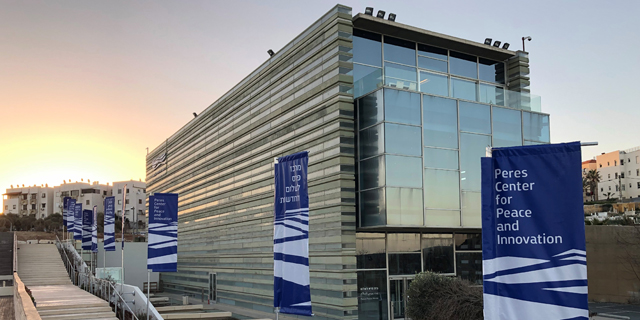 Jaffa’s Peres Center for Peace and Innovation has recently been refurbished as a space dedicated to recognizing some of the stars coming out of Israel’s tech ecosystem. The non-profit center hosts physical and virtual tours with partnerships to help promote peace and peacebuilding among Israelis and its neighbors, in part through joint prosperity-building tech innovation.

The center was established in 1996 by Israel’s former president Shimon Peres. While he lived a political life, he was adamant that the center would be non-political and help “privatize peacebuilding” by encouraging “civil society to do practical and impactful work.” The primary sectors they work with are education, sports, private sector development, agriculture, medicine, and healthcare.

The Peres Center for Peace and Innovation. Photo: Chen Shenhav

There are two metrics that the Peres Center uses to measure its success, explains its deputy director general Yarden Leal-Yablonka. “The first one is impact - all of the programs that we develop are around where we can add value and a measurable impact,” she told CTech. Some of the programs supported by the center include an Israeli accelerator program called Starting Up Together - partnering with the Edmond de Rothschild Foundation, they help bridge the gaps between Israelis who want to explore their potential in being entrepreneurs. The second metric is by the strength of its partnerships. The Peres Center for Peace and Innovation partners with a mixture of people and organizations that can help it fulfill its mission of peacebuilding. These may include community leaders, NGOs, government industries, or private sector businesses. One noteworthy program, although Leal-Yablonka cannot reveal details, is called SharakeHTech, implemented in partnership with the Israel-Palestinian Chamber of Commerce and Industry. It helps with ‘match-making’ opportunities between Israeli and Palestinian companies that can help support tech ecosystems in the West Bank and Gaza. She explains how it can take years to build trust for cross-border cooperation, but once it’s established the Israeli center can help with encouraging positive partnerships and best practices to help those communities thrive.

“We’ve been working with them on capacity building, company building, soft skills, professional skills, but also aiding them through meet-ups and conversations with Israeli companies that are interested in working with them,” she explained. According to Leal-Yablonka, there are also more than 20 West Bank and Gaza-based companies that have the potential to work with Israeli companies who also need to outsource some of their jobs.

The Palestinian companies aren’t anonymous within their own ecosystem, but privacy is respected in regards to their involvement with the Peres Center for assistance and networking. Sadly, “they still don’t have the gravitas in the community to deal with any backlash that comes from a very clear partnership with an Israel entity,” she said.

The Peres Center’s assistance can involve anything from supporting and fostering tech systems to healthcare and education systems. This is important since it is almost impossible to establish a startup in Palestine and unemployment rests at around 40%, Leal-Yablonka explained. In 2019 the new center finally opened its doors after it was decided that the original office would be converted into a unique space that tells “a 360-degreed story of Israeli innovation.” It has since hosted more than 80,000 visitors including school children, entrepreneurs, MBA students from overseas, and international heads of state. CTech recently stepped foot on the premises when it was invited to watch a (socially distanced) Demo Day for the Techstars Israel Accelerator program. While we only saw the entrance and impressive auditorium overlooking the sea, there is a four-story exhibition outlining the history and its mission. Each year, one of the stories is dedicated to showcasing up to 45 different Israeli tech startups. The second cohort of startups will be showcased in January. After a brief closure due to the coronavirus (Covid-19) pandemic, the center is open to the public in accordance with health guidelines.