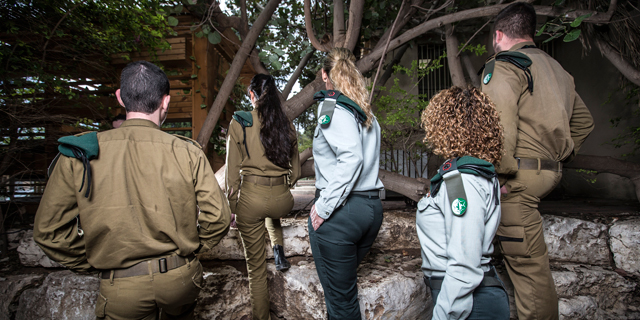 "I'm used to being approached to use my contacts to help soldiers be assigned to one of the Israel Defense Forces's prestigious tech units, but now I'm being flooded by approaches asking me to use my contacts so soldiers can continue in the army and not be discharged," a senior officer in one of the Israeli army's top tech units recently told Calcalist. This officer isn't the only one receiving such approaches, with similar requests playing out in most of the IDF's units. Over recent weeks various military units have held meetings with senior officers in the Israeli military’s Manpower Directorate to discuss the surge in requests by soldiers to remain in the army for at least a few more months, even if it means extending their mandatory service. "My daughter who serves in one of the Air Force squadrons was supposed to end her mandatory service in December, but like many other soldiers she understands that there is nothing waiting for her on the outside," said Iris. "There are no jobs for them through which to save money for a trip abroad and there is no point in saving money because it isn't clear where they will be able to travel to. All of my daughters' friends asked to remain in the army, even if just for a few months so they can see how matters unfold."

According to Iris, since the outbreak of the Covid-19 pandemic, her daughter and her friends have seen how their former counterparts who completed their service in their early 20s are unsure what to do with themselves in the outside world. Most of them are unemployed, with the types of jobs discharged soldiers usually take often being in the hard-hit tourism industry, with waiting on tables no longer an option either. The agriculture sector is essentially the only industry still recruiting recently discharged soldiers.

Higher education studies are also far from a tempting alternative considering they are currently mostly taking place remotely. Universities and colleges are still charging full tuition, but most of the lectures are being held over Zoom. Nevertheless, enrolling for higher education has become the default for many released soldiers as there are few other alternatives.

The IDF is in constant competition for manpower with the private sector, especially when it comes to its elite technological units. The dynamics of this competition are usually determined by the financial situation in the country. "It is clear over the past few decades that during a time of recession more soldiers will sign contracts to remain in the army because they are looking for the stability that the army provides. But when the economy is doing well it is difficult for the IDF to compete with tech companies," said a former senior officer in one of the IDF's tech units.

The situation this time is more extreme than usual as not only has the employment market suffered, especially when it comes to student jobs, but there is also no real option to travel abroad for a post-army trek. As a result, the demand to remain in the army is being experienced across all units. For the IDF this is a golden opportunity to retain manpower that is already trained and experienced. Prior to the Covid-19 crisis, soldiers freshly released from the IDF's elite tech units received tempting offers of tens of thousands of shekels per month from tech companies. NIS 30,000 (approximately $8,700) a month became a totally acceptable starting salary for soldiers that completed their service at Unit 8200, the Israeli military's equivalent of the NSA, with soldiers trained in one of the cyber units even receiving starting offers of NIS 50,000 ($14,500). "Since the start of the crisis we are witnessing a trend that officers in the army's tech units are choosing to continue their service beyond what they are required, unlike in previous years when they would discharge when they could and immediately join tech companies," said Oren Sharon, a partner at S. Friedman & Co. law firm and the head of its tech department. "The reason for this is the employment stability in the military compared to the current instability in the private sector which is experiencing a high unemployment rate." Sharon added that tech companies are unconcerned with this latest development as even those who are still recruiting can select from a large pool of experienced workers who are currently willing to accept a significantly lower salary due to the crisis. Soldiers who remain in the army beyond their mandatory service receive around NIS 7,000 a month, with young officers getting NIS 10,000. These sums aren't negotiable, but they aren’t taxed and are secure. The IDF is currently trying to determine how to leverage the current situation and optimally fill the many different positions. "Due to the recent developments and the fear from employment insecurity in the private sector among released soldiers, there has been a specific increase in requests to remain in the army for short periods," the IDF Spokesperson Unit said in a statement. "Most of the soldiers ask to continue for a few months until the situation will become clearer." The IDF Spokesperson noted that the decision to increase or decrease the military’s manpower is determined only according to the needs of the units and is not affected by the ramifications of Covid-19.

"The IDF aspires to retain the very best human capital and continues to tend to that at all times, including the current time," the statement concluded.