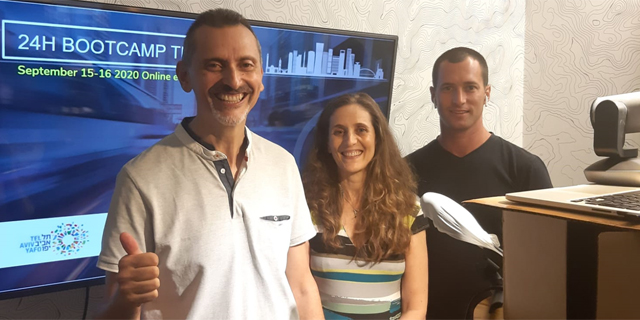 CTech was on the ground during 24H Bootcamp, where 100 startups competed for the winning spot

The winners of last week’s 24H Bootcamp TLV have been announced after taking a break over the Jewish holidays. The three teams were fertility medical devices IMMA.Health; AI-based desk organization tool DeskPlan; and children’s app StoryToons.

The bootcamp took place over 24 hours in mid-September where hundreds of participants worked together to try to create the next big startup. The ‘Shark Tank’-style semi-final saw eight teams pitch their final ideas to a panel of judges consisting of early-stage investors and business angels. During the bootcamp, the startups received advice from mentors, speakers, and keynote speakers including CEO of OurCrowd Jon Medved, former CEO of IIA Aharon Aharon, and Nir Zohar, President and COO at WIX.

IMMA.Health is a medical device that helps women perform their own follicle followup at home. DeskPlan helps offices optimize the assignment of daily work locations for employees using AI to help companies get back to work safely. StoryToons is aimed for children between the age of 3-8 who can create paintings and videos on an app with their parents.

As part of their prize, each winning team received a spot to pitch their venture to entrepreneurs and venture funds at SigmaLabs; a full 250-hour program at ThePowerMBA; and tickets to the DLD Tel Aviv Innovation Festival. All participants received complimentary or discounted offers from ThePowerMBA, Fiverr, TLV Municipality, WeWork, and Jumpstarter.

24H Bootcamp TLV was initiated by Yossi Dan with the mission to help establish new startups in the Covid-19 era. While the event took place entirely online, the head operations were based out of WeWork Hazerem in South Tel Aviv, in partnership with Tel-Aviv Municipality, Google for Startups, Microsoft for Startups, Pitango, OurCrowd, Fiverr, WIX, and more.