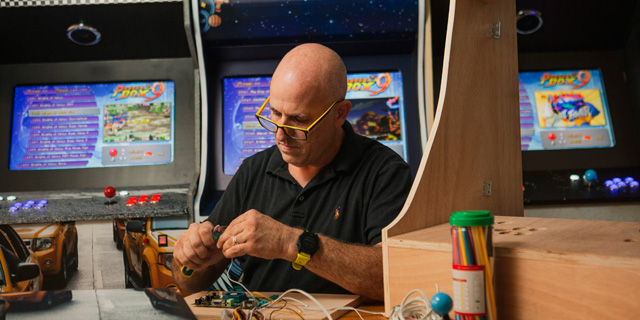 Tomer Eisner left behind a tech career to construct nostalgia-driven consoles in his living room and sells them at $2,000 a pop

What are arcade games? “Back in the 1980s and 1990s, when the video game world was still in its early days, most of us didn’t have those games at home. We would go to an arcade that held large video game machines, that were operated by tokens, and each one only contained a single game.” How are arcade games different from today’s offerings? “Arcade games were much better. They weren’t violent and were much simpler, for example, a player needed to get from point A to point B and eat apples like in Pac-Man, or cross the street without getting run over like in Frogger. Today, there’s a constant competition over which games have better effects or higher level graphics, and it is too difficult for our brains to comprehend, it’s simply too fast.”

“That’s a difficult question. On one hand, I am still constantly applying for jobs in my sector, because the pay is high. On the other hand, last week I had an interview for a senior position and ended it after six minutes because I realized that it didn’t interest me. Now, I’m deep in the world of arcade games and want to fulfill their potential. I have a friend who opened up a game store in the Netherlands, and told me we should think about joining forces in the future and expanding the business to Europe. My greatest dream is to open a store in Soho, New York. I’ll get there one day.”