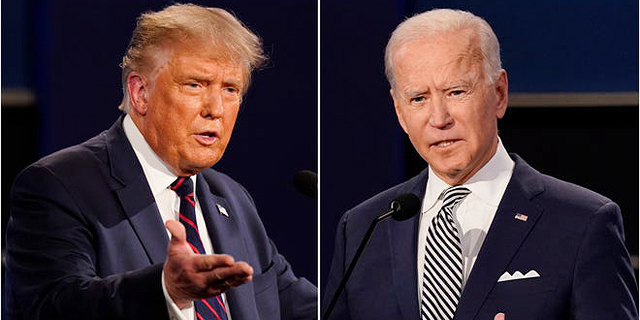 No matter who sits in the White House, U.S. aid is still guaranteed and the world’s only superpower will continue to be the primary target for Israeli exports

It may be a while before the post-election political landscape in the U.S. is clear. The results, whatever they end up being, may only be determined following the counting of mail-in ballots and possibly an extensive legal saga.

After the winner — Donald Trump or Joe Biden—is determined, it will be necessary to examine the U.S.-Israel relationship through two central parameters. The first is the “Fundamentals,” meaning the basic characteristics of the ties that are not going to change, no matter who the winner is, and guarantee that the status quo remains largely intact. The second parameter is the various minor or major changes to U.S. policy that may cause ripples outside the U.S. borders and impact Israel too.

Donald Trump and Joe Biden face off during a debate. Photo: AP

Israel has been and will continue to be a strategic American asset in the Middle East, and the alliance between the two countries is not likely to change substantially whether a Republican or Democrat is sitting in the White House. The U.S. aid to Israel will continue flowing in as long as it isn’t affected by external factors that don’t rely on the identity of the winner. The aid package in any case is not supposed to be re-addressed during the upcoming term, only after the 2024 elections.

The U.S. will continue to be Israel’s main export target, the recipient of nearly a quarter (23%) of the country’s export goods. When it comes to the services sector, one of Israel’s biggest growth engines, 40% is geared to the U.S. market. All in all, it is a figure that adds up to nearly $15 billion - the vast majority (82%) in tech and R&D services. When it comes to tourism, which makes up 14% of the service exports, American citizens are the largest group, making up 21% of the total incoming visitors. These elections won’t change that, no matter if Trump or Biden ends up winning.

Another factor that is not dependent on the identity of the winner is the U.S.’s monetary policy. The policy is determined by the Fed, led by Jerome Powell, who will continue to steer the ship in a clear direction keeping interest rates close to zero. The Fed will also continue to purchase government bonds at a massive rate and, no less significantly, purchase massive amounts of corporate debt. On Wednesday the heads of the Fed are scheduled to meet and may decide to increase the purchases further.

The U.S. economy is expected to undergo its worst recession in modern times - worse than the 2008 financial crisis. According to the updated forecast of the International Monetary Fund (IMF), it is facing a 4.3% decline in GDP, a figure that is expected to dictate U.S. macroeconomic policy. Despite a dramatic improvement in the unemployment rate, which fell from 14% after the first Covid-19 closure to a level of about 8%, the U.S. is still in the midst of a major employment crisis, with predictions of double-digit rates, similar to Israel.

A Biden victory will, however, bring about some changes. Primarily, it is possible that there will be a decline, though not an all-out cessation, in tensions with China, following Trump’s trade war which caused serious harm to global trade and made a significant dent in Israel’s foreign trade figures in 2019.

A lowering of tensions with China, won’t only increase the rate of global trade and bring about the removal of tariffs and other obstacles, but will also weaken the U.S. administration’s demand that Israel ceases, or at least significantly reduces, the activity of Chinese companies in Israel, especially when it comes to infrastructure. Only a year ago Israel, under pressure from the U.S., created a government committee to oversee and filter out foreign investments. A Trump victory may force Israel to double down.

Biden will also be the harbinger of good news to the Israeli cleantech sector. After all, the development of alternative energy solutions played a central role in his campaign platform. It may provide a golden opportunity for Israeli companies operating in the field, which is experiencing rapid development but can still reach new heights.