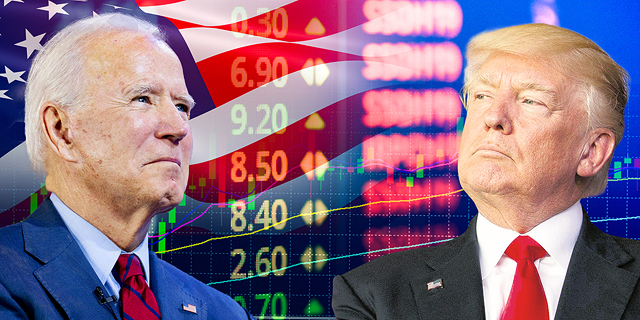 Closer than expected U.S. election race has investors on edge

Investors moved to price a greater chance of U.S. policy gridlock after a close and tightly contested election on Wednesday. Strength in U.S. Treasuries and the dollar indicated that even if Democratic challenger Joe Biden were to win the race for the White House his party may not have the support of the Senate needed to push through the large fiscal stimulus investors had hoped for. 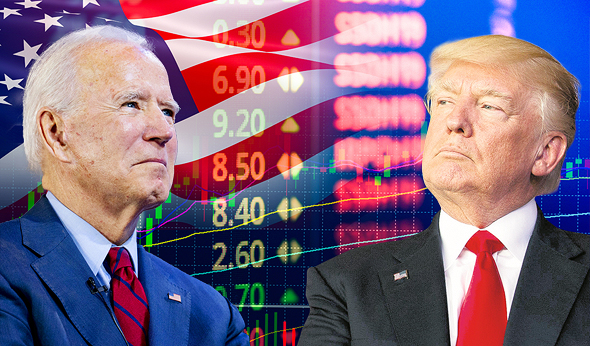 Donald Trump and Joe Biden on the background of stock market charts. Photo: AP and Shutterstock

Furthermore, technology stocks surged, with tech-heavy Nasdaq futures gaining 1.9%, on the expectation of receding chances of a Democrat presidency, that could usher in rising capital gains taxes or tougher antitrust measures. Even though Wall Street's "fear gauge", the CBOE Volatility Index, eased slightly, it remained unusually high, reflecting the likelihood that it may be days before the result is known in the three key Rust Belt states of Michigan, Wisconsin and Pennsylvania. Reflecting that uncertainty, betting markets swung violently on the Presidential vote. Early in the count, bookmakers flipped from having for months assumed a win for Biden to suddenly pricing a high probability President Donald Trump would keep the White House. But as votes streamed in they reversed again and now strongly favour of Biden's chances - up to 70% or more. "Vote tallies in key Senate races are consistent with no overall Democrat control even in the event that Biden wins the Presidency," said Toby Nangle, Global Head of Asset Allocation at asset manager Columbia Threadneedle in London. "As such the abolition of the filibuster, feared by tech investors wary of the prospect of regulatory hardening looks less likely. The prospect of a very substantial fiscal package that would boost nominal GDP ... looks lower with a split Congress." President Trump won the battleground of Florida and with the race down to a handful of states, and both Trump, 74 and Biden, 77, had possible paths to reach the needed 270 Electoral College votes to win the White House. The U.S. dollar jumped to it highest in three months against the euro before giving up some gains, while the yield on the 10-year U.S. Treasury note slipped off five-month highs as investors prepared for prolonged political uncertainty. Mexico's peso and South Africa's rand rallied as MSCI's emerging market currency index hit a 12-day high as Biden appeared in the ascendancy again. He re-emerged as favourite to win the election in online betting markets, a reversal of fortune for Trump who was favourite overnight, according to data from three aggregators. "The polls are proving wrong again," said Giles Coghlan, chief currency analyst at HYCM. "They predicted an overwhelming Joe Biden victory, but the outcome of the U.S. presidential election is currently on a knife edge." In addition to the presidency, control of the U.S. Senate was potentially up for grabs in Tuesday's vote, with Democrats hoping to wrest power from Republicans. NO 'BLUE WAVE' But some investors saw fading chances for Democrats to score a big win in the Senate as Republicans held the line in several contests that had seemed up for grabs. Markets have been fixated in recent weeks on prospects for a massive fiscal relief stimulus to help the economy recover from the coronavirus pandemic that has killed more than 230,000 Americans. A "Blue Wave" sweep that sees Biden win and Democrats capture the U.S. Senate had gained a lot of investor attention in recent weeks and was seen as the surest path to a massive fiscal package that could support equities and accentuate trends of a weaker dollar and steeper yield curve. "If we have a Republican Congress the fiscal stimulus is going to be much smaller than expected by markets and closer to $1 trillion than $2 trillion, which is the most likely outcome currently," said Nikolay Markov, senior economist at Pictet Asset Management. The increased chance of a Republican Senate was seen as decreasing the chance of rising capital gains taxes and boosting tech, said Andrew Brenner, head of international fixed income at NatAlliance Securities. Some investors see a Trump win, which would take tax hikes favoured by Biden off the table, as a best-case scenario for the stock market. Ahead of the election, JPMorgan predicted an "orderly" Trump victory as the most favourable outcome for equities. Since the 2016 election of Trump, who ushered in corporate tax cuts that supported equities but also imposed trade tariffs that led to volatility, the U.S. stock market has gained over 57% and hit new highs. Investors remain most worried about the race being too close to call or contested for a while. "Markets can live with either candidate," said Francois Savary, chief investment officer at Swiss wealth manager Prime Partners. "The scenario they don't want are legal problems over the outcome and significant political unrest."