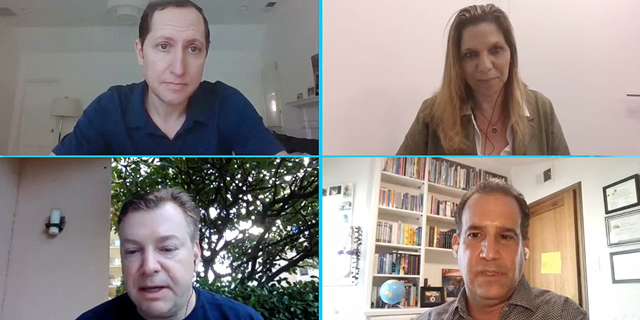 How to create a stable of unicorns: J-Ventures panel debates investments in the biggest tech companies

“I have met CEOs of many companies which went on to become Unicorns. They are exceptional and they think big, they have big visions,” Merav Weinryb, the Managing Director of Qualcomm Ventures said at a panel dedicated to investing in unicorns that took place online on Tuesday as part of J-Ventures’ annual Investors Conference. The panel, moderated by serial founder, CEO and investor Michael Rolnick and featuring, in addition to Wenryb, Jake Sein, the Managing Partner of Stonebridge Ventures, and Brett Rokhind, the Managing Partner of BRK Capital, dealt with how to identify companies with the potential of reaching unicorn status and how to stay ahead of the public market. J-Ventures is a primarily Jewish and Israeli VC fund based on a strong community of leading partners in VCs, past and present executives, including VPs, C-level managers, and board members in the largest public tech companies like Google, Uber, FB, Amazon, Apple, LinkedIn, and 70 serial successful founders. According to Oded Hermoni, managing partner and co-founder of J-Ventures, investors in the fund backed or founded over 25 unicorns and it is acting as a "Capitalist Kibbutz" where the investors are involved with sourcing, screening, and helping the companies.

“So the first thing I looked for was the CEO. Then I went on to look at things like their position in the market, their win rate, their growth rate, and all the KPIs that you look for in such companies," Weinryb continued. “If I were to compare between a company and a Unicorn, I feel that the sales are really exceptional. Also, according to published statistics, 90% of the companies which went on to become Unicorns were grown by the founder throughout. So that is what I look for.” “I tend to invest in companies that are going to become Unicorn companies in the future. The factors on which I assess the companies can be summarized by the team, the TAM (total addressable market) and the type of business model. The revenue model, the relevant market, is more important than most people think. For the type of business model, I look for businesses with the potential of having high gross margins or business models with good entry points,” Sein said when asked to define the desired attributes of a unicorn. Rokhind shared his own model when it comes to the attributes he looks for, which he called the “Four Ms.” “They are; Market, Model, Management, and Money. We are investors so we need to know the right time to enter a company and assess their market, their model and their management team, and then price accordingly,” he elaborated. Rokhind went on to describe his experience working with one of the biggest companies out there - Alibaba. “When we met Jack (Ma), he had a 102-year vision. Having started in 1998, he wanted to create a business that crossed across three different centuries. What Unicorn businesses like Alibaba and even Amazon now do is that they take the cash flow generated from their primary business and they invest it in other initiatives like AliPay and AliCloud. At the time, the real question was whether they could make all these businesses successful. As an investor, we depend on our pattern recognition, I did the same.” When asked what drives the huge valuations of unicorns, Rokhind suggested a mix of public and private money. “I think it is the combination of public markets and the private markets. Right now, it might seem like the public market is driving them,” he said. “You see these cycles in both, public and private markets. The size of the price keeps getting bigger and bigger. There are 502 Unicorns out there. If you look at Zoom, Shopify, the $100 billion mark can be seen in many companies now. So if you were to invest 10 to 30 billion, you could get twice or thrice of the money in return gradually.” Sein, meanwhile, addressed the changes in the market in terms of top-performing companies and the factors that drive their growth. “Back in 2000, the biggest companies were Chevron and Exxon which are oil companies. But today, the biggest companies are tech companies. Apple is now worth two trillion dollars, Microsoft is also closing in on two trillion dollars. The market of technology products has grown significantly. High growth companies are now 100 billion dollar companies. They are driven by digital transformation. I think Covid-19 actually accelerated that," he said. Addressing the Israeli investment market, Weinryb discussed the vital importance of going international as quickly as possible. “There is no local market so Israeli entrepreneurs think of the global market right away. The advantage is that we have relationships with the U.S., Europe, Asia, and even China. We’re so used to working like that, now with Covid-19 and everything is on Zoom, everything is online anyways. In other cases, you fly to the right places and you get the job done.” Make sure to watch the video to hear the panelists’ predictions for what’s in store for the tech investment market in 2021.