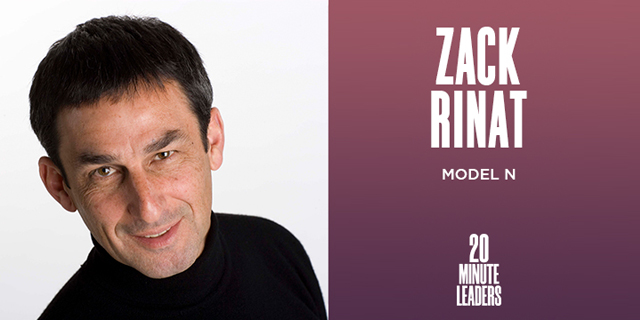 Dream, Align, Respect, and Excel: serial founder Zack Rinat talks to Michael Matias about the core values he lives and works by

Nearly every entrepreneur dreams of building a successful company and taking it public, and it is unthinkable to many to build four successful companies and earn an award from the White House for positively impacting society and the economy. Yet, Zack Rinat achieved these tremendous accolades by building four highly successful firms NetDynamics which was acquired by Sun Microsystems (Nasdaq: SUNW, NYSE: ORCL), Model N (NYSE: MODN) , TradingDynamics which was acquired by Ariba (Nasdaq: ARBA. NYSE: SAP), and Conduit which acquired Perion Networks (Nasdaq: PERI) and received the Champions of Change award from the Obama White House in 2013.

Rinat always believed and emphasized that the single most important aspect of a company, and the factor that will either make or break it, is its corporate culture. For Rinat, corporate culture is founded on the founders’ core values. These core values are served as a compass to guide employees in every decision, action and bend in the road. Zack Rinat shapes his corporate culture upon four core values that boil down to the acronym DARE: Dream, Align, Respect. and Excel.

Rinat spoke to 20MinuteLeaders creator Michael Matias abut why it is extremely important to him to give back to society, and help his community flourish whether by creating new jobs or encouraging social entrepreneurs in their ventures.

Who are you as an entrepreneur?

Before coming to Silicon Valley in 1990, I worked on a project to develop a jet fighter known as The Lavi in Israel. I worked on the flight control computer before the Israeli government canceled the project. The project cancellation made me realize that I wanted to control my destiny, and I figured entrepreneurship was the way to do that. In 1995, I co-founded a company called NetDynamics, which created the market for application servers. The company was enormously successful and was acquired by Sun Microsystems, which was later acquired by Oracle. Our work is known right now as the standard and is called (J2EE) Java 2 Platform Enterprise Edition. After the acquisition, I helped a friend of mine, Professor Yoav Shoam of Stanford, to start a company called TradingDynamics, which was a pioneer in business to business auctions. The company was in business for about 18 months and then got acquired by Ariba which was later acquired by SAP. I was then the chairman of the board of Conduit which split into a privately held company and also to a publicly held company through a reverse merger with a company called Perion Network.

But my longest endeavor is with Model N, which we founded in 1999 and took public 8 years ago on NYSE. Two years ago, I retired from Model N and am now spending my time between running the DARE foundation and few technology start-ups.

How much value did you bring into the world economy through these different endeavors?

The way I always evaluated business contribution to society was through multiple factors starting with the number of jobs we created both in the U.S. economy and in the global economy. I estimate that in the last 25 years, my companies have created tens of thousands of jobs. This jobs creation led to the Obama administration recognizing me as a Champion of Change — entrepreneurs that create jobs in the economy.

You also enjoy taking time off by attending events like Burning Man.

Yes, I love the Burning Man event, and it has become a way of life for me. Burning Man to me is another shining example of the magic of cohesive culture centered around 10 principles/values. These values serve as a compass to a very large group of people who live and exemplify them throughout the festival, and the magic is visible. This is the same philosophy of creating a corporate culture, in my belief.

What are your two cents on creating culture and how do you go about doing it?

I believe that culture needs to be explicit and that implicit culture is no culture. There are two ways to define culture. The first is from the outside inwards, where you look at what the culture ought to be, and you drive towards it. The second is from the inside out, you look deep inside the company to understand the values of the founding team and you define those as the culture. I believe in the latter because values are constant and rarely change.

How do you make culture explicit?

In my companies, culture came down to four core values: Dream, Align, Respect, and Excel. As a CEO, I have always interviewed the first 250 people myself because if you get the leadership and the first employees right, then real magic happens. It is paramount to explicitly interview people to understand cultural fit and to hire only those who exemplify your core values. The founding team and the executive team needs to be the role model of living and promoting the values. Cultural fit needs to be ingrained into the way you evaluate people in their performance reviews, in their promotions, and in their career path. Culture needs to be celebrated and recognized. We had a process of an annual nomination, selection, and verification of people that exemplify the core values and we recognized them in our annual meeting and gave them a large amount of stock in the company.

How did you take this concept of DARE and then transition it into a non-profit movement?

Describe yourself in three words.