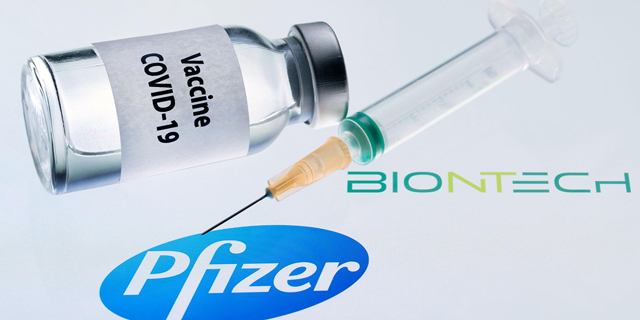 While Israelis overwhelmingly disagree with sharing their medical data with state security agencies, they are willing to do so with drugmakers in exchange for Covid-19 vaccines

When Israel acquired millions of Covid-19 vaccine doses from U.S drug manufacturer Pfizer, questions arose regarding a deal the government had struck with the company to hand over data on the vaccination campaign’s results in exchange for the rapid transfer of the doses. Some privacy advocates had claimed the company was essentially conducting a human experiment on Israelis by collecting massive amounts of people's personal data for its database. While the official purpose of the data gathering is to analyze herd immunity, predict future pandemic outbreaks, and study possible side effects of its vaccine, critics claimed Israel was allowing its citizens’ private medical data to be used in what constituted as clinical research. A similar deal was reportedly struck with Moderna too. A survey conducted by Israeli cybersecurity company Kape Technologies resulted in some surprising findings on Israelis’ attitudes toward privacy, with some 60% of respondents saying they do not have an issue with Pfizer collecting their data.

A survey found that Israelis are more wiling to share their data with drugmakers like Pfizer than state security agencies in exchange for Covid-19 vaccines. Photo: Getty Images

The survey was conducted among 500 Israelis aged 18 and over, which is a representative sample of the overall adult population, and asked whether they agreed to have their medical data transferred to the drugmaker for research purposes. Out of the respondents, those aged 35-44 were the most concerned about their data being shared, with 51% saying they didn’t agree to share it, while the age group of 65+ were least concerned, with 75.9% saying they were willing for Pfizer to obtain their data. Women were slightly more hesitant about having their data shared, with only 57.6% agreeing to it, compared to more than 62% of men. Broken down according to ethnic affiliation, Jews (62%) were by large far more willing to have their data shared compared to Arabs (48%). The survey also asked the public about its sentiments regarding state surveillance measures being used to track coronavirus (Covid-19) patients to break off infection chains. The results showed that people were less willing for state agencies like the Shin Bet internal security agency to keep tabs on them, seeing it as a bigger harm to their privacy. Startlingly, while many agreed to share their personal data with drugmakers like Pfizer, a higher percentage remained opposed to sharing that same data with the security agency, with 51% of the respondents saying they strongly disagreed, and 45% saying they agreed.

“The most surprising finding which arose from the survey found that while on one hand many of the respondents agreed to share their private medical information with drugmakers Pfizer and Moderna, on the other, many were vehemently against sharing similar information with the Shin Bet,” said Kape CEO Ido Erlichman. “There is a growing tendency among the public to approve sharing data when there are clear benefits to be reaped and compensation for that data (namely from pharmaceutical companies who have proved they are capable of issuing effective vaccines within a short span of time and there is inherent value in that fact). That being said, there is a rising trend among respondents to differentiate between types of data that they are willing to share, from a standpoint of waving their privacy rights. These findings show that the Israeli consumer sees medical data as a highly sensitive topic, but is willing to cooperate to attain specific objectives that serve the general public’s health.”