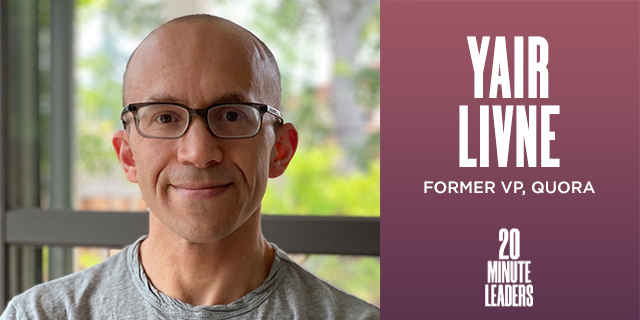 Mathematical principles can be found or applied in nearly every industry today, and Yair Livne, former VP of product at Quora, is using mathematical algorithms to better understand and improve society. Livne has a passion for applying arithmetic concepts to addressing and solving today’s pressing issues. In his personal research, Livne investigated the factors that contribute to protests and found that economic conditions are a strong determinant to a protest’s occurrence. After leaving the field of academia, Livne took the opportunity to work at Quora, an online platform where users ask questions and provide answers. As Livne notes, the sharing of knowledge is a delicate balance that must allow for freedom of speech while also minimizing threats of misinformation. With countless social media and news sites available, information is more accessible than ever, and Livne is determined to help spread information in a more positive way.

You were doing your Ph.D. at Stanford in economics and working on some really interesting things, both matching theory and political economy. Tell me what led you to do that research.

I was curious about economics for years before coming to Stanford. I was doing my BA and master’s at the Hebrew U in Jerusalem, mixing math and econ throughout. I was really interested in this intersection where the theory and the beauty of mathematics can be applied to real-world problems. I got curious. What other kinds of beautiful mathematical applications can be used to understand the world or maybe improve the world? Matching markets was a really fascinating thing. People were innovating on matching theory to do things like kidney donations and matching kids to schools in a really efficient way. Some of those techniques were actually implemented in the kidney donation market or in school systems like in Boston and New York. That was how I got pulled into this area.

How does mathematics play a role in our lives, whether it's matching theory or political economy? I'd love to really understand this world a little bit better and show some of the excitement.

I think kind of the modern way to view economics is from incentives. If you can describe with a little bit of math—it doesn't need to be super sophisticated—what people's preferences are and what kind of outcomes they prefer, then you can model the world and use this description of incentives to predict behavior. If you can predict behavior, then you can go one step higher and describe what kind of systems would actually push forward better behavior on the part of economic agents. Then you can think of designing these systems in a way where matching is "optimal," and you can get the best outcomes for the largest amount of people. That's, for me, a really neat thing where you can take mathematical models and solve them in a way that generates better outcomes for people in their real lives on the things that matter most.

What about the political economy? How does math play into politics and what's coming there?

I got pulled into it through my wife, who was also doing a Ph.D. at Stanford at the same time. She was in the political science department. We got really curious on this topic of protests in authoritarian regimes. These are people who are taking a big chance and going to voice their objections to the regime under the threat of arrest or execution. Why are they doing that? What kind of dynamics contribute to them taking that chance? What are they looking to get out of it? We were using a mixed approach of looking at empirical data but also building a mathematical model that would try to explain under what conditions would people actually take that chance. We reached a model where the economic conditions were often a strong determinant of when protests might happen. The timing was really opportune because we were doing this just before the Arab Spring.

Yair, you're working on these mathematical models, and all of a sudden the Arab Spring happens. How does this all play out? Are you surprised?

We definitely were surprised. This was not something that we had seen since probably the fall of the Soviet Union, where people work on toppling regimes by going out into the streets. It is very relevant or eerily similar to the dynamics we described in our papers because ultimately the logic was very simple. When things get bad enough from an economic perspective where people are desperate enough, they'll take that chance. That was the heart of the model. But really connecting it to the empirics and actually being able to predict this was the neat part of the research. It was both surprising but very consistent at the same time.

At that point, you're leaving academia and you have a series of different experiences leading up to your job at Quora. Walk me through your life path that led to being VP of product at such an awesome company.

It may seem random, but I think there is a thread connecting everything. What I've enjoyed or what I've been attracted to is how do we use math or logic to unlock a lot of value. That's something that's always driven me or I was passionate about. With Quora as an economist, this is actually a fascinating thing to dive into because you can think about Quora—and I think this is true of knowledge more generally—as a market. There are people who need certain answers to certain questions and other people in the world who know the answers. How do you connect the two sides of this market and how do you unlock value? That was the key question that motivated me.

My first project, which we later deprecated, was called Quora Credits, which was a way for people to accumulate virtual money and be able to spend it by asking people directly for their answers to a question. You basically got the ability to buy someone's attention. If you are a good member of the community and you supply value yourself, then you were able to utilize that and get knowledge out of somebody else's head. That was a beautiful concept to me.

When I look on social media, it's very hard for me not to be pessimistic about where we're headed with misinformation. How do you approach this mentality that we have a real issue on our hands and it's growing exponentially?

We were actually in some sense validated by all of this happening. That sounds ironic. But we had been worried about misinformation or just generally what's true or not for many years. Our mission is to share and grow the world's knowledge, real knowledge that is useful to people. Misinformation is something that undermines people's trust and knowledge. That was an existential threat if the platform can be manipulated into showing prominently or spreading information that's not actually true. That undermines trust in the platform. One of the key moments for me in that journey was in 2014 or 2015, when we had sent an email out to hundreds of thousands of people and an answer at the top of their email had basically 9/11 conspiracy theory content in it. That was like a real wake-up moment. We really have to put in some guardrails and make sure that we don't let that kind of "information” take over.

That's a lot of responsibility, isn't it? To understand that the things that you're working on are the core of information?

Absolutely. It's scary at times because you really are potentially influencing the way hundreds of millions of people a month think. If you're pushing the wrong stuff out there, that is the opposite of our mission. That is a really tricky area. It's very hard to be the voice of truth and be an arbiter of every little fact. We're talking about millions and millions of answers a week. Nobody can sift through that and make a decision. You need to strike this balance of allowing debate and allowing enough spectrum of views to have a fight out there and have that evolution of ideas. But at the same time, the stuff that's intentionally false or deliberately misleading or is the conspiracy theory realm, (you need to) have a really hard line there.

What needs to happen so that I can help my 6-year-old niece as she grows up? How can the world help her gain curiosity in the right way?

I think that's a really key question. This is a really interesting intersection of regulation and corporate responsibility. Frankly, a lot more debate needs to happen there. I honestly think that the right solution is some regulation, potentially not a massive amount, but a lot more corporate effort to squash these pockets of the Internet that are really dangerous.