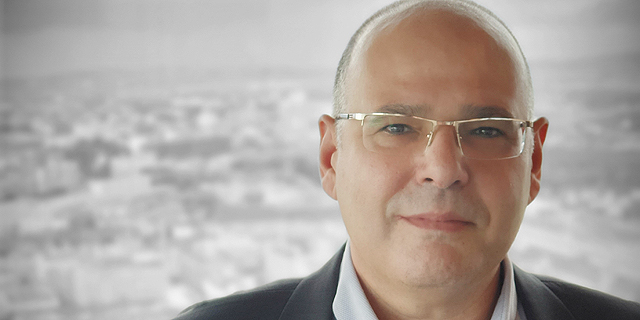 Israel’s SpacePharma is pioneering the ‘Made in Space’ revolution

Through advancing experimentation in suborbital conditions, the company is laying the groundwork for future off-planet production

One Israeli startup is taking the stuff of science fiction and turning it into a reality. SpacePharma has developed a laboratory which can be utilized to conduct experiments in microgravity at a fraction of the cost of traditional launchers. The company, based out of Herzliya with offices in Switzerland, has an expanse of research and development projects it is currently working on, including miniature satellites, equipped with solar panels, and other hardware which is all developed out of its blue-and-white offices. “We’re taking concepts that people once thought was merely science fiction and turning it into science fact, or reality,” Yossi Yamin, co-founder CEO of SpacePharma told CTech. 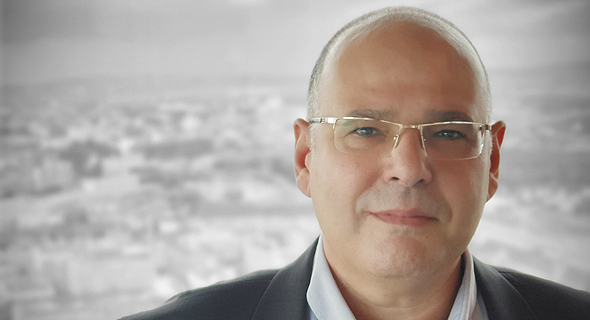 While many traditional space tech startups focus on designing launching capabilities or constructing spacecraft, SpacePharma differs in that it creates something wholly unexpected - minituried labs that can conduct experiments in suborbital conditions - or while floating mere meters above the Earth’s atmosphere - for research purposes and someday even pharmaceutical production. “We can squeeze our labs onto a satellite, spacecraft, or have it installed on the International Space Station which is Eytan Stibbe, the second Israeli astronaut, will be doing to carry out Israeli experiments when he goes there next year,” Yamin said. The company’s products are innovative for a host of reasons. “It’s difficult to send heavy, large machinery into space, and it is highly complicated to operate it there since it requires astronauts or some other form of human intervention. We are skipping and bypassing space agencies regulations - while adhering to space law - by providing unmanned, miniaturized, effective technology,” Yamin said. Doing so is also very expensive, and cargo is charged by the kilogram, meaning that a six kilogram cargo could cost around $30,000 to send into space. Thirdly, several experiments may be stored on a single device, encouraging scientists to collaborate and split launching costs, and are more energy-efficient. “Our technology can also be controlled remotely, activated in orbit, retain communication from anywhere on Earth, all while conducting life-saving research. And this is the beauty of SpacePharma,” he elaborated, “we’re leading a revolution in NewSpace technology.” The company retains a full end-to-end satellite service, as well as constructing its own autonomous satellites, solar panels, telecommunications, liquid systems, pumps, reaction chambers, sensors, spectrometers: everything that enables science to be efficient in orbit, while lowering the cost and encouraging collaboration among scientists to send multiple experiments on a single payload. 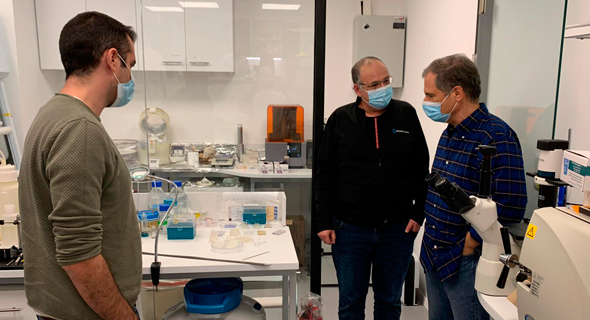 Second Israeli astronaut Eytan Stibbe visited SpacePharma's facilities earlier this month to observe some of the types of experiments he will be conducting aboard the ISS using their lab. Photo: SpacePharma

What is unique about conducting experiments in microgravity environments? “We have two separate types of technology: organ-on-a-chip, with which we can grow tissue cultures or liver cells,” he added that this is mainly biology oriented, “and lab-on-a-chip technology particularly relates to the chemistry aspect of the flow of liquid and its chemical structure in space.” In the absence of gravity, molecules do not remain in phases and appear arranged in a uniform order and can be studied. “We’re specifically concerned about studying how reagents (or solutions) can be converted into high-yield crystals,” he said. That same application can be used for targeting cancer cells as well, he related. Since molecules exhibit unique properties in space, they can be studied individually. In suborbital conditions, there are no ripples in water surfaces and droplets can be almost “suspended” or appear static, allowing for researchers to study the more fine-tuned aspects of how the body or an organ reacts to a specific treatment at the molecular level. What do some of those experiments entail? “We study everything from colloids, enzymatic reactions, liver cells, fluid physics, stem cells, cancer biopsies, whose molecules retain their three-dimensional shape.” Research such as this could possibly lead to new breakthroughs in fields such as life science, foodtech, chemicals, materials, and more. “And this is what we are trying to bring to the world, a floating laboratory that can help the pharmaceutical market,” he said. 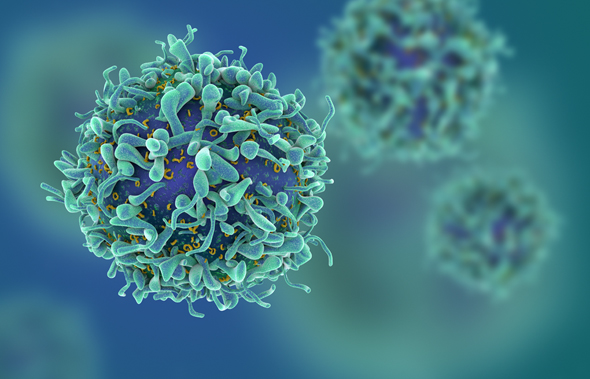 Remote control via an app The entire operational management can be controlled through the SpacePharma app, which can be installed on a smartphone and can create a protocol and manage experiments. In one experiment, scientists studied the effects of microgravity on stem cells. The compounds were then imaged by sensors who photographed them every few milliseconds, and that data was immediately relayed via telemetry once the satellite passed above SpacePharma’s Swiss-location. Moreover, the data is encrypted and protected from external sources, he noted. Teams in Switzerland later relayed that information to the Israeli team. Conducting experiments remotely, even through an app, is no simple feat. Often sending experiments to orbit won’t survive post-launch, so Space Pharma has developed an innovative late-loading method that allows them to survive up to 96 hours after launch by using powder or rehydration techniques, which can be reactivated in space remotely once in orbit. Space Pharma also has a Corolab project designed to help ease strains caused by the Covid-19 pandemic. What does that entail? “Since scientists could not touch Covid-19 samples for fear of infection, we’ve designed a device where we can take those samples and remotely analyze them. Although it has never been done, we believe that we can take any experiment to orbit and study its structure. We’d like to take Covid-19 vaccines (which are required to be stored at -77 degrees Celsius) and store them in space, eliminating the need for high-powered deep-freeze technology, high costs, and the vaccines’ rapid expiration.” Fusing pharma and space SpacePharma hopes to one day produce such vaccines in space. Its MoTi satellite will be the first pharmaceutical production facility in space. “We’ll be able to launch it, and then send it back to us, having the first ever products ‘Made in Space,’” he said. The satellite’s name - contrary to popular opinion - doesn’t derive from the popular Israeli name Moti, rather from a name of a movie— Charlie Chaplin’s Modern Times, since it will be a revolution much like the film was in 1936 for the entertainment industry. SpacePharma has also collaborated with the Israel Space Agency and its Italian counterpart in launching two other satellites, the DiDo-2 and DiDo-3. The former aimed to study effects on enzymes or proteins in space, and the latter put select Italian and Israeli technologies into orbit, including the first-ever conducted by an Israeli hospital in space, the Sheba Medical Center whose Dr. Ohad Gal-Mor examined methods of how to combat antibiotic resistance. 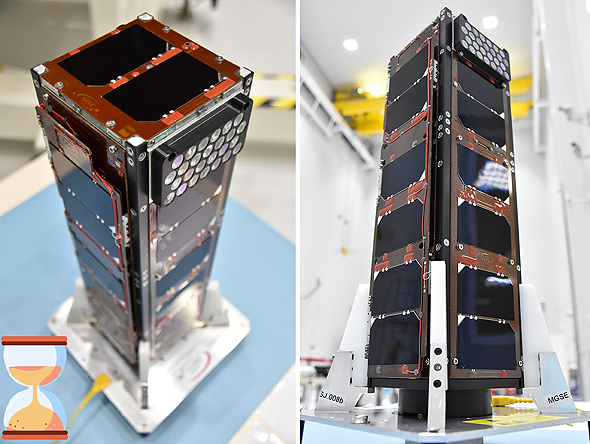 The financial aspect and beyond Currently, SpacePharma has collaborations with NASA, the European Space Agency, the Italian Space Agency, and Moffitt Research Center in the U.S. It is aiming to secure another $20 million in a series B round, led by a European venture capitalist from the space sector whose name may not yet be revealed. “So far, we’ve invested $20 million in a series A round, half from equity while another half comes from grants and sales,” and this is a respectable ratio for young startups, he noted. “Business in orbit requires a longer time to mature than software, data, or AI startups do, and can take between eight and ten years to go public; it requires a lot of patience and patients,” he quipped. In the pharmaceutical industry, companies usually start to develop medications once there is a decent sized population, he explained, “but we are interested in asking governments and other companies whether they’d like to send their experiments to space on our platform, and subsidize them to lower the price. The new economy is in orbit.” SpacePharma has been globally recognized and received many awards. And innovation doesn’t just end in suborbit. It has potential that is more far-reaching and extensive than what many can comprehend. “We could have an entire industrial zone in space that aims to improve our life here on Earth, and later enhance our journey to the Moon, to Mars, and to other planetary destinations.”