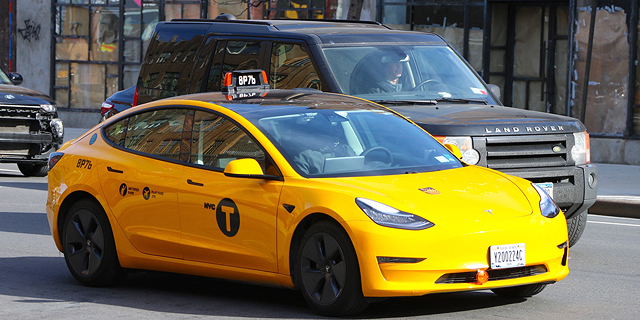 Keep inhaling those fumes: Tesla Israel is refusing to sell its vehicles as taxis

Though the electric vehicle’s range is suited to the Israeli cab driver, the company says it prefers to focus on private buyers for now

If you’re in Israel, don’t expect that Tesla taxi you ordered to arrive any time soon. Despite the fact that their range makes them perfectly suited to the role and they could cut down on expenses for operators and pollution for everyone, Tesla Israel is refusing to sell its electric vehicles as taxis.

The company, which for the time being is concentrating its sales through its website, is not offering its vehicles to be sold as taxis, which would allow the drivers to purchase them with zero sales tax and grant them back a return on VAT. Tesla’s call center is not available to assist in the matter.

“Tesla promises a driving range of upwards of 400 kilometers, which would suffice for my daily needs, without having to take a mid-day break to charge it,” a veteran taxi driver told Calcalist. “But I can’t reach them to make an order.”

A Model 3 Tesla, which would cost an individual NIS 180,000 ($55,360), would cost a taxi driver NIS 144,000 ($44,290) after tax returns. While the purchase cost is around NIS 40,000 more than for existing popular taxi models like the diesel-powered Skoda Octavia, the electric vehicle would significantly cut down on regular expenses such as fuel and maintenance.

Most taxis in Israel are sold via specialized agents who hold exclusive agreements with importers. Tesla has yet to enter an arrangement with any of them, even though it routinely works with external contractors on things like installing charging stations (Afcon), bodywork shops (Shagrir), insurance (Phoenix), and financing (Mimun Yashir).

In Israel, similarly to other countries, authorities are trying to encourage taxi operators to abandon polluting diesel-powered cars in favor of more environmentally-friendly vehicles. In 2019, the Environmental Protection Ministry enacted a subsidy for people who purchased hybrid vehicles, issuing a tender that was awarded to Toyota, which resulted in its sales tripling to 800 units. An Energy Ministry pilot to operate 20 electric-powered Nissan vehicles as taxis in Tel Aviv had to be nixed because of regulatory difficulties at the Ministry of Transportation.

Tesla vehicles are already being used as taxis in New York, London, Barcelona, and Amsterdam. That said, the operation of a fleet of 70 Tesla vehicles at Schiphol international airport last December resulted in a 1.3 million Euro lawsuit by the BIOS taxi company. The company charged that the Tesla Model S vehicles weren’t able to meet the guarantee of a 400-kilometer range between charges. They were replaced by Model X vehicles, which solved the charging issue, but other problems, such as Tesla limiting the company to service only two of their vehicles simultaneously, resulted in the operator claiming vehicles were forced to stand idly for weeks at a time. Additionally, Tesla refused to provide the taxi operator with extended warranties beyond those it granted individual buyers, meaning that after 80,000 kilometers, the company was forced to pay for repairs at an accumulated sum of 150,000 Euros.

Tesla Israel said that for now, the company prefers to concentrate solely on sales to the private market, and will consider expanding its sales in the future.