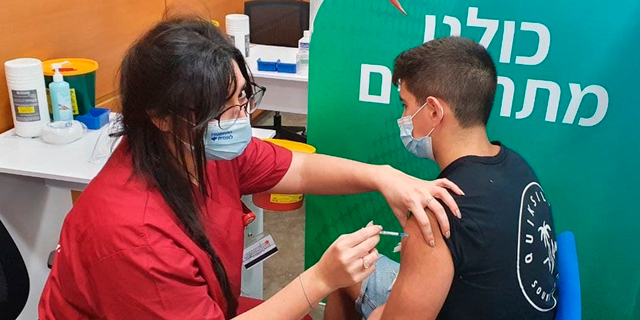 Only 608 people out of a total 602,000 had tested positive for Covid-19 more than a week after receiving second dose

Israeli healthcare provider Maccabi said on Wednesday that Pfizer Inc's Covid-19 vaccine was 95% effective in a trial of 602,000 people, reinforcing the drugmaker's efficacy findings. Maccabi, which covers over a quarter of all Israelis, said in a statement that only 608 people had tested positive for Covid-19 more than a week after receiving the second of two required Pfizer doses.

A boy getting vaccinated in Israel. Photo: Ynet

The comparison was against a group of 528,000 Israelis with similar backgrounds who did not receive the vaccine, Maccabi said. Of those, 20,621 tested positive. "By comparing the proportion of new cases between the vaccinated and yet-to-be vaccinated groups, efficacy of the vaccine in Israel is currently estimated at 95%, seven or more days after receiving the second dose," Maccabi said. Most of the 608 infected vaccinees reported only mild symptoms, such as a headache or cough, Maccabi said. Some 21 required hospitalisation, seven of whom had severe symptoms, it added. The data by Maccabi reinforces efficacy findings by Pfizer and its German partner BioNTech, which following a late-stage trial also found their vaccine to be 95% effective. Nearly 44% of Israel's 9.1 million citizens have received at least one shot of the Pfizer vaccine, making the country the largest real-world study of its efficacy. On Wednesday, Clalit, Israel's largest healthcare provider, reported a 94% drop in symptomatic Covid-19 cases among 600,000 people who had received both Pfizer doses.