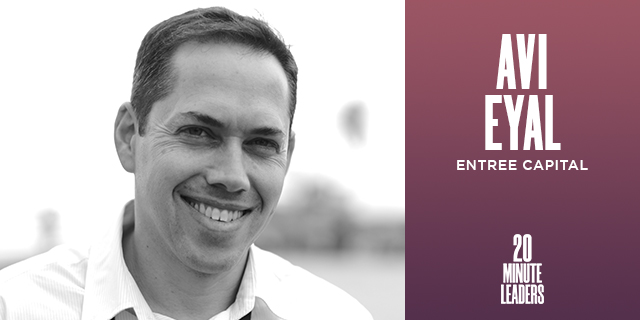 "My passion is growing businesses, growing founders, and I live and breathe that"

Avi Eyal, Managing Partner of Entree Capital, talks to Michael Matias about his path from being an entrepreneur himself to helping build 90 companies as an investor

It may seem that Avi Eyal has done it all, from developing a series of successful startups to co-founding Entrée Capital, which has invested in 90 companies. But he is not ready to stop any time soon. He continues to work because he wants to be challenged each day, and he has an insatiable appetite for learning. Eyal is also passionate about helping others in their startup dreams. He advises young entrepreneurs to not rush things. Even if lots of funding is within reach, he suggests taking the time to make sure your product and processes are right in the early stages so you are ready for your breakthrough. Speaking to 20MinuteLeaders creator Michal Matias, he reminds founders their goal should be founding a strong and meaningful company, not just raising lots of money.

How do you even have such an incredible trajectory from startups to venture capital?

I was born in Israel to a very average Israeli family. When I was six, my father took up the role of engineer in South Africa, and I grew up in South Africa. I did my schooling in South Africa, studied computer, software, and electrical engineering at the University of Natal. To put myself through university, I started a company writing software for people. I called it Great Programming Solutions (GPS). By the time I finished university, we had 50 or 60 employees. Two years later, we mergered into an IPO in South Africa and London. From not knowing any better, we had fairly good success. I eventually left the business and had another two startups I wanted to try out. What I realized was that I needed to leave South Africa if I wanted to make it big; like actors go to Hollywood to try to make it big, entrepreneurs who want to make it big go to the U.S. I landed in the U.S., and I was fortunate enough over the next six years to be involved in a number of startups, which were sold eventually. I learned a valuable lesson that if things don’t look right and don’t feel right, it’s much better to exit gracefully, get your money back, and move on. Later, my partner Martin and I decided to start investing in companies. We had reached the ripe old age of 40, and everyone was younger, brighter, faster, stronger. We thought we could leverage our founder experience to other industries, other startups. That was the beginning of Entrée Capital.

Walk me through some of the similarities between the different ventures you formed. If you look back to the first venture you had in college, what are some key mistakes or insights you gained?

Which mistakes didn’t I make? I think that we were lucky and successful despite everything we did. I always started in businesses that were moonshots or at the forefront of what they were doing. In the States, we had a business that was really like Shopify in 1999. There wasn’t the ability to build things of that scale in the cloud in the Internet 1.0. We did very well with it. I was also involved in a company that was taking DNS and putting it in a software stack for the first time, taking it off routers. Fast forward 15 years later, I backed a business in New York, which is the new generation of DNS, and it’s one of the leading companies around the world for application load balancing, contact distribution, DNS, security, etc. A lot of things repeat themselves in new guises.

Mistakes we made then were not understanding how to hire the right kind of people, not understanding how to scale business, and having a fair amount of arrogance and building things around yourself rather than building things around teams. Typical mistakes people make when they don’t have the benefit of expertise and an ecosystem to use. In South Africa, there wasn’t an ecosystem to teach you how to build great tech companies. That’s the one thing you have to give to Israel, London, Boston, New York, San Francisco: these places have developed unbelievable ecosystems … of information sharing and founders helping each other. People can share the information, and it lifts up the industry and makes everyone successful.

For young entrepreneurs starting on their journey, what are some key things that they should keep in mind as they go about their venture?

I think that too many founders, especially in the last year or two, leverage their own brand to go out and raise incredible amounts of money because it’s easy. I think for founders to really be successful, founders should take their time, get to a decision about what they want to build, begin building it, make decisions on how they are going to scale, and how those things are going to look before they raise copious amounts of money. I think with their seed or pre-seed round, they should take time and make sure they have it right. If you get to this breakout situation or moonshot trajectory, you don’t have time to go back and do things all over. You don’t have time to go back and correct the sins of the past. Money is not the objective. The objective is how you build a big company, a successful venture that is meaningful to you and your stakeholders. My view is to take it slow, repeat, build the flywheel, test, retest, and then grow. I think it’s a hard thing to hold yourself back in this market where money is so cheap, but I think long-term, you’re best served if you do that.

I have to ask one of the most difficult questions. Why do you continue to work when you’ve done it all?

My passion is growing businesses, growing founders, and I live and breathe that. I think a lot more people have done far better. But I suppose in my own way, I love founders, I love building, and I enjoy the challenge. I need to be challenged every day. For me, it’s a combination of the challenge that you could be missing out on something and the need to learn every day. I am insatiably thirsty for information and data and learning. Also, to be fair, it’s not that I’ve built 90 businesses; the founders have built 90 businesses. I have partners and employees who work with me, and the partnership has built 90 successes. I may be the front face of the partnership, but everyone in our business works really hard and does extraordinarily well. I think the success has been that insatiability and appetite to build and not to miss out.

Finding the right partners for us has been a really challenging thing to do. I think that we come from a background where all of our partners are quite technical; they have very well-formed ideas of what they believe in. They all have the highest morals and ethics. To become a partner, we have to work with someone for a long time. We have to know them for a long time. That’s always a challenge to get to the right place. From a founders and company perspective, we have created a formula for how we look at businesses and how we look at founders. The founders individually are important, but the founder is no good if they can’t work in a team. We don’t like compromising on people that may not have absolute integrity or ethics. I think all too often, people overlook certain challenges that founders have because the idea is great, but my view is you want to be partners with the people you are going into business with. We tell our founders that we are founders alongside them, and because we came up as entrepreneurs, we can’t see any of our businesses in any other way than from an entrepreneur’s eyes. We find that alignment works out very well.

I think they would tell you thoughtful, integrity, and loyalty.