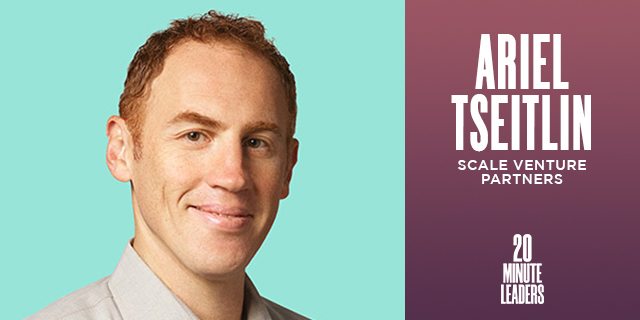 “When you think it's the time to hire, it probably means it's too late"

Ariel Tseiltin, a partner at Scale Venture Partners, offers Michael Matias insights on how startups can scale up

For some individuals, finding the correct career path can be challenging and frustrating, but for Ariel Tseitlin, former director of Cloud Solutions at Netflix and current partner at Scale Venture Partners, joining the tech world has always been the goal. Tseitlin began to code at the age of seven and went on to become a trained software engineer. After working at Siebel for a number of years, Tseitlin was given the opportunity to lead his own team and learned how to manage the human side of the operation. Now, as a partner at Scale, Tseitlin helps entrepreneurs grow their companies and emphasizes that founders should begin to hire new talent about six months before they think they need to. Over the course of his career, Tseitlin has explored multiple aspects of the business and tech world and is looking forward to imparting this knowledge to the entrepreneurs he works with.

Ariel, give me a little rundown of your journey.

I’m originally from Georgia, the former Soviet Union, but I spent my formative years in Israel before we finally settled in the Bay Area. From a career standpoint, I’ve always enjoyed programming, and I started coding when I was seven or eight. My father was a software engineer, and he taught me the ins and outs of programming. My mom also enrolled me in a basic programming class for teenagers. I graduated with a degree in computer science from UC Berkeley and later got a job as a software engineer at Siebel Systems. I loved it, but I was yearning for a more challenging role, and when an opportunity to be an engineering team manager came up, I took it.

What was it like doing that transition from an engineer to managing a team of engineers at Siebel?

It was interesting and challenging, but I enjoyed it. I took a situational leadership class to quickly adapt to this new role. As a team manager, I gained interpersonal and team leadership skills, which complemented my technical skills. Siebel was later acquired by Oracle, where I continued to work as I pursued an MBA in marketing and finance at Wharton because I wanted to understand that side of the business. Coming from a heavy tech background, I always looked at marketing and sales as overhead, but learning gave me a different perspective and a better understanding of that business function.

When did you get excited about scaling?

It wasn’t something I pursued intentionally; it almost felt like a natural trajectory for a growing business. As I went through these different experiences, whether it was growing a small company to a large company or increasing the number of users on a platform from a handful to millions, the more I understood scaling. Working at Netflix in particular helped me grasp scaling and how to build scalable and distributed systems.

How would you describe your experience working at Netflix?

Netflix is an incredible company. They have top talent where everyone is self-sufficient and an expert in their domain. Their management culture is admirable, and the way that they were able to scale this freedom and responsibility culture empowered individuals to do amazing things. Before Netflix, I worked for a company called Sungevity, and in my last meeting, we reviewed the Netflix culture slides as management and began to think about aspects we could incorporate in our organization—it’s that good.

What is Scale Venture Partners, and what is your mission?

The term "scale" there refers to scaling organizations, scaling revenues, and scaling businesses. The mission of the firm is to help companies, typically those raising series As, series Bs, or series Cs, once they’ve built a product and have some initial market validation to take those early revenues, and scaling them into big businesses. Another part of scaling is understanding when to start establishing processes around conversion, pipeline generation, and go-to-market strategy. This is the set of systems that you have to build after you've built the product and you've been successful with getting your product to market. A lot of what the firm's resources are oriented around is how to avoid some of the common scaling mistakes.

What are some of these common mistakes?

Most of the time, when you think it's time to hire, it means you’re probably too late—you should've started six or 12 months ago.

When you join a company in their journey as they're about to scale, what role do you take in helping them do that?

We talk to a lot of customers, prospects, and people in our network who would be typical buyers before we make the investment to validate that there’s a product-market fit. In the areas where I feel like I can add value, I get fairly involved, and the first one is around how you scale revenue and how you build some of the systems that I mentioned earlier. Then the second is around the product and the technical side of it, and something that I think I bring uniquely from my own background in understanding how to build engineering teams, how to build products, and even some technical scaling aspects. One of the first things I did when I started Scale - before I could really add any value on the venture side because I was completely new to venture when I first joined - is I went around to different portfolio companies and essentially gave them the talk that I used to give at Netflix around how to build large, scalable, distributed systems that are fault-tolerant and resilient. That was something that was very valuable to those engineering teams.

And is that easier as you're more concentrated on a specific industry?

Because the same players come up quite often, right?

Yes, and also you can better determine the quality of the answers you're getting. You can put people in the bucket of “these folks get it” because they understand the complexities of the world, and when it comes to infrastructure, they might be early adopters and early signals. Then these other folks are just going to do what they read about in the technical press, so having that experience lets you understand where the market is going maybe a few months or a few quarters earlier.

What are some of the key places in the realms of cloud infrastructure and cybersecurity that you think bright minds should put their effort into?

I would encourage folks to understand from their own vantage point the gaps in the market and then build to that because it's those folks that are in the trenches, that are building it, and that are understanding where those challenges lie that I think are in the best position. In terms of specific areas, the cloud infrastructure side of things is just extremely nascent at this point. Every company that's doing anything at a reasonable scale from an engineering standpoint needs to build its own platform from the ground up and construct it in different pieces. I'm still waiting to see who will build cloud-native applications where you don't have to custom build to AWS, GCP, and Azure. There are also various parts in the development lifecycle. As the infrastructure changes, the management, orchestration, and workflow piece of it has to change as well whether it's in software quality or in deployment.

What three words would you use to describe yourself?

Curious, and I'll leave your listeners with one last thought, which is: the world is your opportunity right now. Don't listen to everybody that says no to your ideas because you're going to get 100 nos for every yes you get. So, have the passion, have the conviction to do what you believe in, and I think that you'll have an incredible time in your life.